What an absolutely fantastic weekend away and I didn't even get to ride a bike. It was MOTO GP weekend at Phillip Island. My wife and I had flown down on soft bastard airlines(more on this later) to Melbourne and stayed in the Crown Plaza in the heart of the city. Crown Plaza is right on the Yarra across from the Crown Casino. I normally don't like big city's(funny that, I live in the biggest city in this country) I guess because I don't really like large crowds, and busy traffic etc and Melbourne had these in spades. It was just as busy as Sydney if not busier. Oh and what the hell is up with the turn right from the left hand lane rule all about?? That is some crazy shit right there. 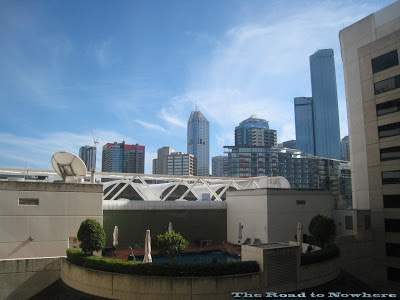 This was the view from our room, unfortunately we didn't get the river view; we got the pov pack city view, which wasn't to bad anyway.

On the Friday we wandered around the city and had a bit of a look around. We must have had about 45 seasons in the one afternoon, it rained, then was sunny, then rained again, then was sunny with a bit of wind thrown in for good measure then some more rain before we had some more sun. The wife wanted to ride on the tram but we didn't really get the chance. It was interesting to see that they had some horse drawn carriages going round the city centre during the day and the night. At night time they had fluro lighting which looked pretty neat. 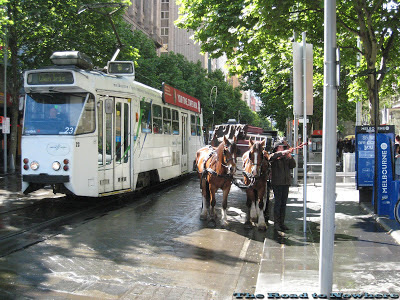 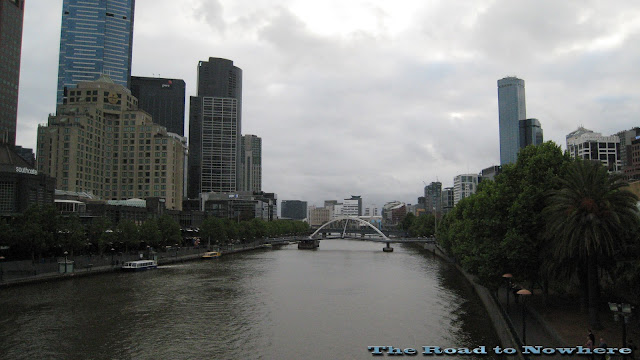 Looking up the Yarra River towards the casino and our accommodation. This section of Melbourne reminds me of Darling Harbour in Sydney with the exception of the water colour, much of the other things are the same great little restaurants with overly inflated prices. We saw one place along here with one of their mains, a wagyu steak at $115. Ouch! 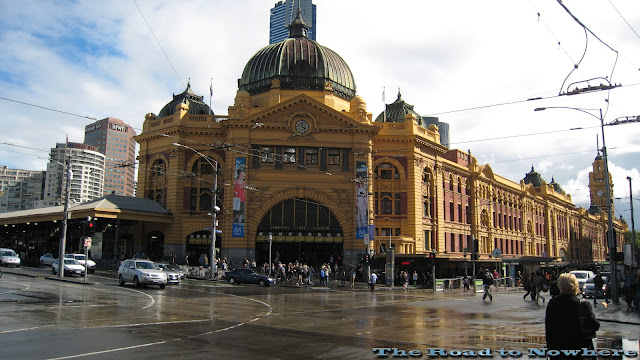 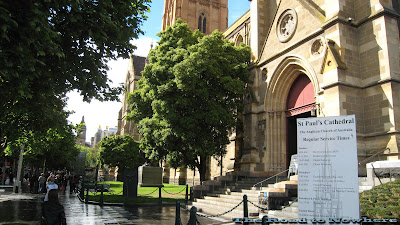 Melbourne has some beautiful architecture with some really old buildings in amongst the new high rise towers. We wandered around Federation Square and looked around, we didn't really have the time to investigate to much. 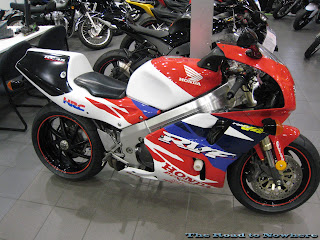 We walked up Elizabeth Street which is famous for its bike shops in the heart of the city. We browsed through the accessories department without managing to buy anything which is some sort of minor miracle. We saw this RC45 on the show room floor. It was commanding a princely sum of 45k. Wow not bad for a 1994 model jap bike, that only goes up in price. I haven't seen one of those before.

We were up early on Saturday and Sunday to catch the coach out to the track, it's a boring 2 hour bus trip to the island from the centre of Melbourne. We were glad to get off and made our way to the nearest coffee stand to get a morning wake up call. There sure were a lot of people at the track, especially on Sunday. I don't think I've ever seen it this busy. 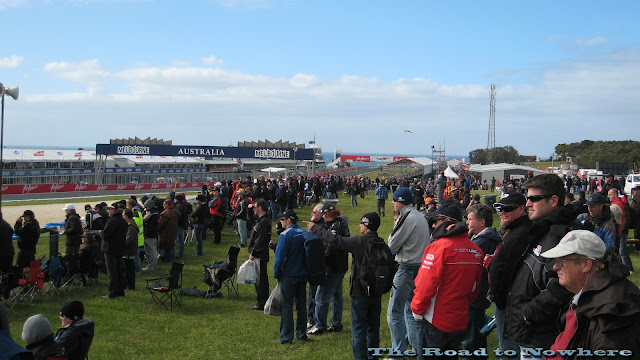 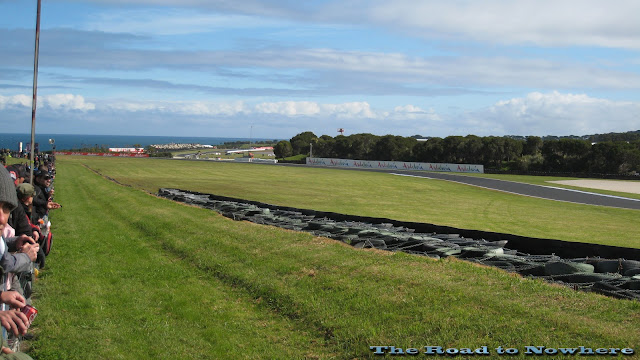 We made our way through the grand Prix expo tents to see what all the manufacturers had on offer. There were a lot of great bikes in there to ogle. They had a Casey Stoner RCV211 and Jorge Lorenzo's YZF-M1 on display, probably last years model but they still look good.﻿


We made our way past turn 1 and the camp ground. You always see some weird and wonderful sights in the camp ground and this year was no exception. These guys had a great idea and put it into action. I wonder if they had any customers? 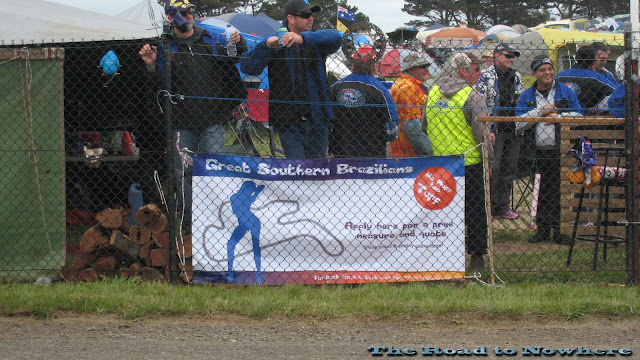 Phillip Island is know for its recalcitrant weather and Saturday was windy and cold but Sunday turned out to be a great day with the sun out and warm we were down to our T shirts. For the non Aussie readers Phillip Island race track sits right on the cliff tops on the southern edge of the island with some spectacular views. 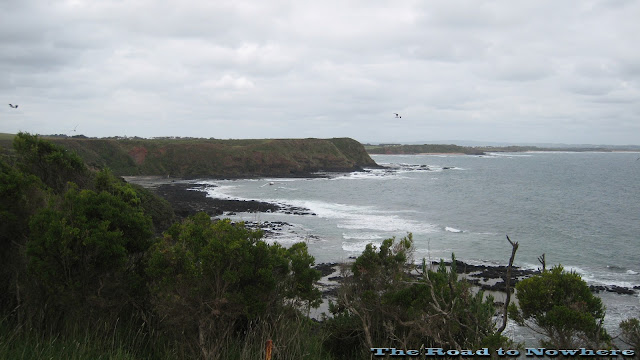 They had the RAAF Roulette's in action again this year. To be perfectly honest I'm over the roulette's after all they need to get serious and bring back the F-18 fly past like they had years before and even the cars at Bathurst got treated to the F-18. The noise and speed of the F-18 is so awesome it makes the prop driven planes seem boring in comparison. I mean its the fastest race bikes on the planet why not have the fastest planes we can get. 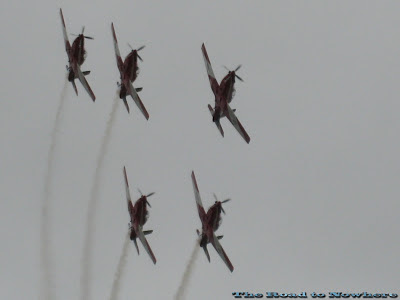 Here is the view from the seats we had at the Bass Straight stand. It was funny that I stood up to get something for the missus and then I heard my name being called. Who would be calling me? I looked up and over and instantly recognised 2 old friends that me and my brother used to ride down to Phillip Island with for the World Super Bikes many years ago. I'd lost contact with them several years ago after moving several times. It was fantastic to meet up with them again here in the same grand stand only a few rows away.

Both Tim and Brian were looking really well. We chatted for a while and when they found out I didn't ride down they immediately reminded me that I'd taken "SOFT BASTARD AIRLINES". We all laughed, we had some great times together coming down here for many years. We all laughed about us standing around in the pissing rain and wind to watch the supers whilst everyone else was packing up and leaving and we kept on drinking and watching. "HARDCORE" fellas, it was great to catch up, maybe we will be riding again soon.

I was hoping to catch up with Jules from TARSNAKES Fame but unfortunately he couldn't make it to the Island this time around. All the best on your snowy ride this weekend Jules, stay safe mate! 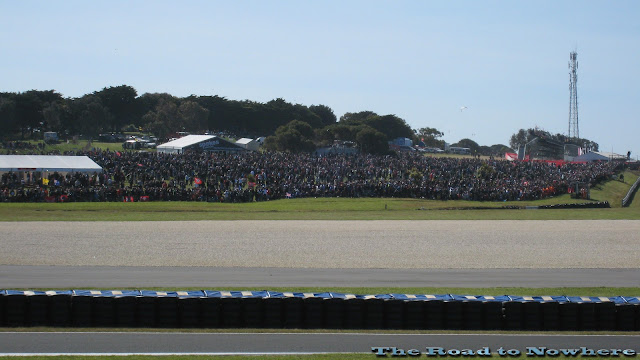 Race day came and the track was packed with people. As I said before I'd never seen this many people here before. The weather on Sunday couldn't have been more perfect. Moto2 and 3 races were very close and exciting. Then the main event what we all came for. Casey Stoners final farewell to his home crowd and he didn't disappoint. He killed the rest of the field which was a great result but not spectacular racing. Still it was great being there to see the bikes and hear them, oh did I mention that they are bloody loud, like ridiculously loud and I loved every minute of it. 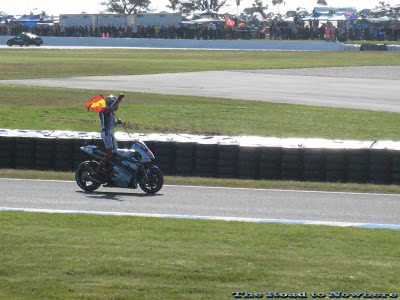 It was then back to the gates to line up for the long, longggggg bus ride back to Melbourne, at least I got to have a sleep on the way back. There were stacks of bikes leaving the circuit which I captured some of. 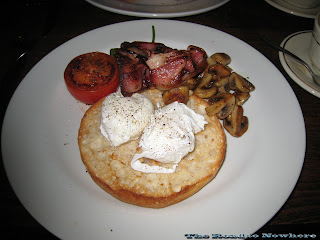 After our big breaky and coffee we went and had a look in the Melbourne Aquarium to which we had free passes to. The Aquarium in Sydney is bigger than the one down here but it was still good for free. Then it was time to head back to the airport and back to reality.

because someone has to keep my bro in a job!