What have I gone and done now?

As I mentioned in my last post there hasn't been much riding going on lately and I have just had my R1 serviced ready for the spring weather which has just rolled in nicely. It was 26°C here today and the weather ahead has been forecast for warm and no rain for the rest of the week. Woo Hoo motorcycling weather at its best. To top that off I've also just taken 3 weeks annual leave. Sounds like a match made in heaven for planning a motorcycle trip. I haven't been out for a ride in over a month.

There have been a few other developments around here of late as well which has hampered getting out for a ride. I have Phillip Island MotoGP coming up in about 7 weeks time which should be good and I have already organised leave with the Minister of Finance for a 4 day/3 night overnighter in November with Bushpig and a few friends. We will be riding down into the NSW Snowy mountains and Victorian Alps along some of Australia's best motorcycling roads with some like minded bikers and I am really looking forward to that ride as it could be the last for a little while. 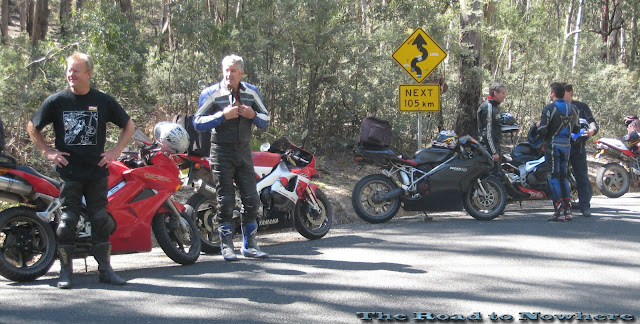 Bushpig and Steve on the Bonang Hwy
Bushpig rang up a couple of weeks ago about a weekend ride coming up next weekend and asked if i'd be in. The conversation went something like this;
Bushpig: We got another overnighter coming up going to Rylestone again for the first ride of the spring. You coming.....
Chiller: When is it?
Bushpig:  The first weekend of September.
Chiller: Crap it, I can't make it.
Bushpig: HAHAHA that's right your f*cked now mate. Then lots of laughter down the phone.
Yeah thanks for that ya bastard, it's like you planned that just for me. So getting to the reasons why the riding around here has been pretty lack luster of late and is looking pretty bleak into the immediate future with the noted exception above.
Have I sold the bike? Am I giving up riding? Is the world falling apart?
No to all of the above with the exception of the last one, maybe.

One of the best things that has ever happened in my life happened last friday which is also the same reason for the death knell of my immediate riding future. At 12:33 our second daughter Olivia was born into the world weighing 3.5 kgs and 50cm long. Both mum and bub all doing well.

﻿
I have read a lot of other peoples blogs about how they got into motorcycling, and there were a lot of those riders that got out of riding when they had kids only to get back into it later on after the kids had grown up and moved out. I am really determined to not let this happen to me, as I really love riding and don't really know what I'd do without it. Yes there are family responsibility's now that needs attention especially with 2 little ones, 4 and under. Is it going to change how I ride. Well maybe it will.
Definitely there will probably be a lack of riding to start with, I'm ok with this as that's what happened with our first child, but I still will keep the bike and ride it when I can. Since our first daughter its always been in the back of my mind to take it a bit easy now and to a large extent I have done that. I think I have slowed myself down considerably when out riding. Am I still having fun? HELL YES is the simple answer. When I can't ride I can be enjoying all the fantastic blogs out there.

Does this mean I'm going to sell the R1 and buy a cruiser or tourer? HELL NO! I still have the inner hoon in me just waiting to get out. It's a bit like the Jekyll and Hyde thing. I was hoping to look at getting a new bike by next year for my 40th birthday but that is looking to be as shaky as Christchurch at the moment. I think I'd have a better chance of winning the lottery. Looking at all the new bikes in the dealers last week was very painful knowing what was coming. That second ball and chain will slow me down considerably.
Lets hope I can sneak in at least one ride whilst I am on annual leave to alleviate the frustrations. Stay safe everyone.
﻿
Posted by Steve at Wednesday, September 05, 2012