Touring on a Sportsbike

Being on holidays, plans were being hatched to do some serious sports bike touring. Thanks to my beautiful wife for letting me get out for the day with the new born and all, or more likely she could no longer stand to be couped up with me after 3 weeks and wanted me to get the hell out before she went nuts and belted me with a frying pan. Now all that's left to do is to just decide on a route that would be long enough to have a good day ride and take some pics along the way.

Maps were consulted and different routes calculated until I finally settled on 2 of this states famous biking roads and 1 not so famous one but it is gaining in popularity. This trip would take in the Putty road then across the lower hunter valley wine region and onto the Bylong Valley Way of which I have only been on twice before and I promised to come back and take some photos on a previous post. Then it was back home via the Bells Line of road across the blue mountains. There is some serious cornering to be had in all of this with 575 kms(357mi), 8 hours riding according to the website travel calculator(maybe they should get a sports bike calculator) and 1138m(3733ft) at the highest point, what a great way to spend a Friday morning. 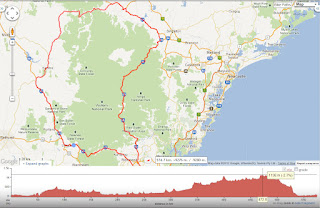 A quick look at weather zone before leaving said 40% chance of showers and 9 to 27°C(48F to 81F), I could see rain on the weather radar heading for the top of the Putty Road right where I was heading. I'm not too concerned as it will take at least an hour and a half before I make it that far and it should have passed by then. I step out the back door at 7am to be greeted with thick fog which surprised me but I was also very happy as I knew that it would stay cooler for longer and usually foggy days here tend to turn into great sunny days. Well it seems I was right on all counts.

It was 11°C(52F) when I left and it was a bit on the chilly side for the next hour or so. I had just passed Windsor northwest of Sydney and thought I'd stop and take a pic just to show you the cool foggy morning.  The sun was trying to peak through the fog. There are many acres of grass farms out here as you can see they disappear into the foggy distance. 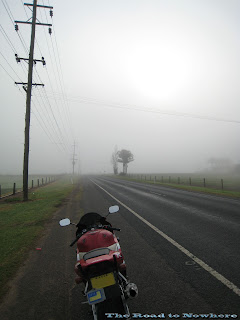 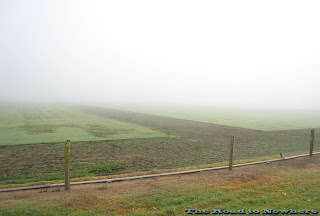 Continuing on the fog began to lift as I got into Wilberforce and the sun was attempting to warm me up. This made for much better riding. There seemed to be quite a bit of traffic out this morning

I decided that I had better take off the baby seat as it may act like a big wind sail or top box and make my normally rock solid stable R1 turn into a tank slapping beast from hell. Just as well as there were quite a few corners to negotiate on this trip.

That's thoughtful of our Roads and Traffic Authority to put up signs telling us how to ride safely, well I guess better to put those up than more speed cameras. 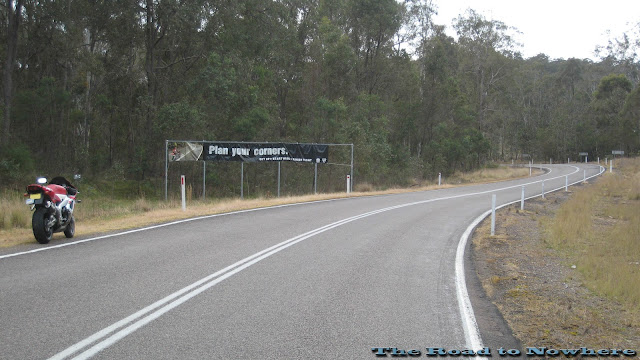 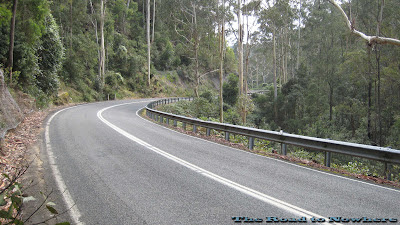 These particular curves in the pics below rate as some of my favourites along this stretch of the Putty road. There are a series of 65kmh  switchback corners that follow along next to the creek here and the scenery is spectacular. The road surface along here is excellent if not a little damp this early in the morning. Still the riding was spirited along here as it always is. 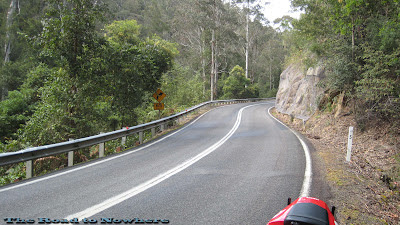 After this section of road it was time for fuel in Bulga before continuing on, I'd made pretty good time as it was 9.15am and I had stopped several times to take some happy snaps. Further along following the Golden Hwy in the Hunter Valley I couldn't help but notice the stark contrast in scenery from left to right hand side of the road. On the left hand side we had beautiful vineyards overshadowed by mountainous vistas and on the right there was a drab barren wasteland of open cut mining operations with Bayswater power station in the distance. I didn't stop to take a photo of it preferring to push on.


Bylong Valley Way winds along the valley floor in between the mountainous plateau of the Wollemi National Park and the Goulburn River Nation Park. The road itself is more like a back road than a main highway but it is pretty good although some sections have a bit of patch work. There are some new wide sections with road markings and then lots of sections that are unmarked.

Today I travelled the road from North to South and I seem to think that it is better riding this way as most of the winding bits are all uphill, much easier to ride uphill than downhill in my book. Almost all of the road is unsign posted on the bends. The very first bend on the first winding down hill section coming from Rylestone is a real doosey coming into it, it looks like a 65er but turns into a decreasing radius 35er, the first time through there I nearly shit bricks I was going in that hot. You've been warned.....


The bridge looms as the gateway to some serious biking fun in the hills beyond. 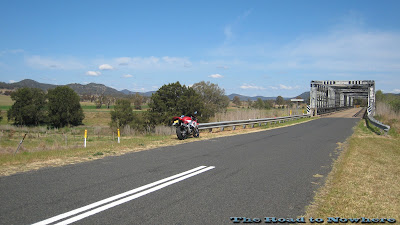 Riding along this section I saw about 15-20 cruisers going in the opposite direction on a group ride. They seemed to going at a pretty good pace. 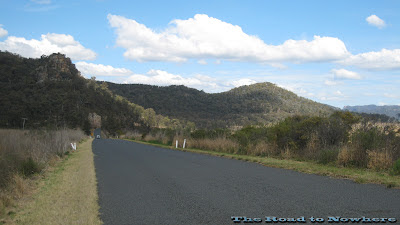 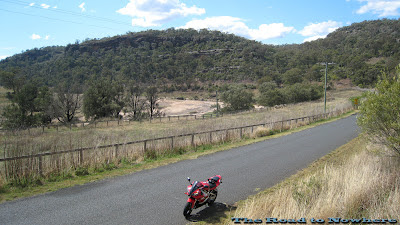 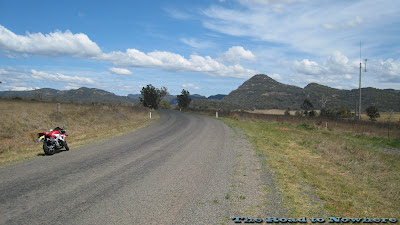 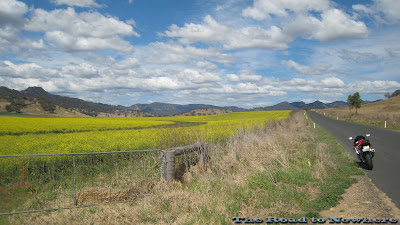 It is now well into spring here and when I stopped at two of these locations to take photos I got swooped on by angry magpies. Luckily I had left my helmet on so they didn't really concern me that much. It would of been different if the helmet was off though. I had to stop to take a picture of the canola fields, the golden yellow stands out in this environment.

The following curve signals the start of the first uphill winding mountain section which is steep and very tight to start with but then opens up. As I was stopped here to take some pics and set up the gopro a guy came by on a Triumph Daytona 675. I could hear him winding it on going up the hill. Sounds like he was in his element.

Here is the first set of twisties up the hillside here on my gopro, and no I wasn't a hero today. Looks like I picked up a freeloader on the lens half way up. Don't mind my poor display of riding but you  get what the road is generally like.

There certainly is no shortage of huge buffs and sandstone cliff faces along this section of road that just seem to jut out from everywhere. I was fascinated by the scenery here. That cave looks big enough to drive a bus into if you could get one up there. 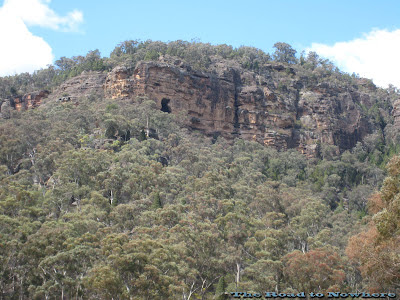 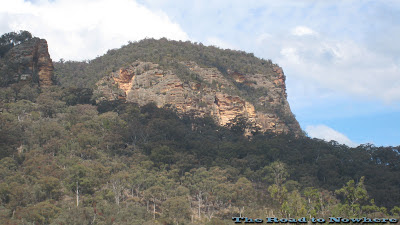 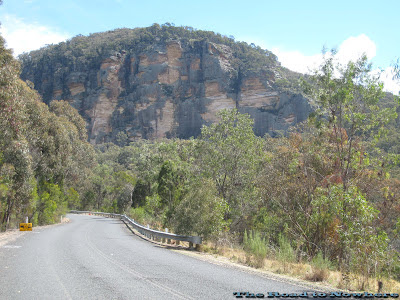 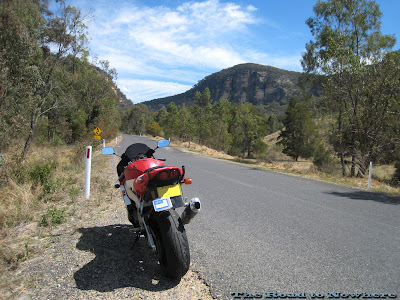 After the second set of uphill twisties it was near on 12:00 and I was starting to get hungry so it was time to get some lunch in Rylestone, I was looking forward to a nice counter lunch at the pub and a beer. When I got into Rylestone the council was ripping up the main street and had a detour in place so I kept going around to Kandos and had some lunch there instead. This was also my second fuel stop for the day. I found the Kandos Hotel in the main street and had a $8.50 chicken schnitzel and an ice cold beer to wash it down with. Sorry no food porn pics. Does it get any better than this? After about an hour stop for lunch it was back on the road again for the homeward leg.

Following the Castlereagh Hwy back down towards Lithgow I came upon a lookout near a little place called Capertee. The view from the road across the valley was breathtaking.
On the way home I could see the cooling tower and smoke stacks from Mt Piper Power station peering over the tops of the hills. It soon passed by and then I could see the smoke stacks from Wallerawang power station looming ahead. I once did a tour of the Mt Piper power station many years ago when I was at TAFE doing electrical trades and was blown away with the sheer size of the thing when you actually get to go up inside.

I decided I would stop by Wallerawang for a bit of a look around as I have only ever passed by but never stopped in to have a look. The power station itself is a coal fire polluting machine but I guess its a lot safer than nuclear. 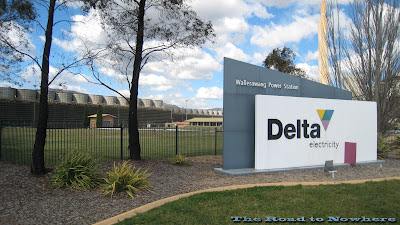 ﻿
These cooling towers are bloody huge, I'd like to see the size of the pumps that have to pump the water around these bad boys. They had two identical sets of these cooling towers as well as the main concrete tower. Most people think that the large concrete tower pours smoke out polluting the atmosphere but its actually water vapour. Heated water enters the top and as it falls from the top to the bottom the process of evaporation takes place cooling the water so it can be re-used to cool the boilers again.

Lake Wallace in the back ground, where there is apparently some good trout fishing. One thing that power stations need and that's lots of water for the supply of the steam generators and the cooling towers. Lake Wallace is a man made lake built by the electricity company but can be used by the public for fishing and kayaking.
It was getting on a bit in the early afternoon now after all these stops to take photos and look about so I decided that it was time to make for home. I'd taken that many photos that I was getting over it a bit. I thought I'd give it the berries across the Bells line on the way home, which I did. I must have overtaken at least 30 - 40 cars on the way back. I did decide to stop one more time just coming up the twisties out of Lithgow which starts the step ascent into the blue mountains and took a photo back down the road towards town.

﻿
The last 80kms of the trip I was starting to get a bit tired as I would describe my fitness level as non existent. My ass was feeling like it was copping a bit of a pounding by the end of it. That's what touring on a sport bike does I suppose. I looked at the odometer at the end of the trip and I had done 638km's(396mi), I did turn around several times to go back to either take photos or more gopro movies and I didn't exactly follow the map.

What an absolute fabulous days riding out on some our countries roads with no rain and sunny weather. This really puts a smile on the dial. I can't wait for the next trip, as I type this 2 days later my thighs are aching still but I am happy.
Posted by Chiller at Sunday, September 23, 2012