Sunday morning came around and it was a pretty warm winters day. So good in fact that it was time for another ride. Geoff was interested in a run up the Putty Road so who was I to argue with that. One of Australia's premium bike riding roads right on our door step. I put on a damart thermal t-shirt under my shirt today as last fortnights ride in the southern highlands had me quite cold and i didn't want to be caught out late in the afternoon as it starts getting cold after 3.00pm. 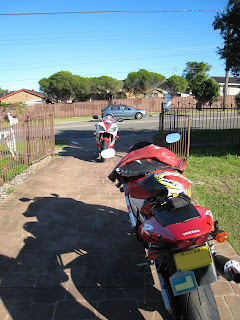 After a quick fuel stop at Wilberforce we headed off, and we couldn't have asked for a better day, it wasn't hot or cold just perfect motorcycling weather. Just after Colo River we stopped so Bushpig could put on his helmet cam. Its a great little device that one. If I can get some of the footage i'll post it up here because its far to hard to stop and take photo's of winding roads like this one, its just not the same. 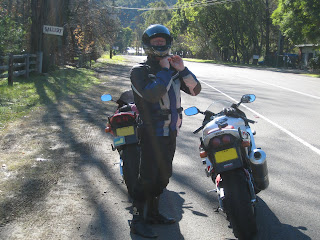 The road that climbs up into the hills after Colo River is a superb peace of twisties although all to short at only 7kms. After this section it opens up into some big sweepers up through the forest. This section of road near colo heights has become alot bumpier than i ever remember.
Here's the Colo River section from Bushpigs R1, with him following me.
After a while we stop in at the old halfway house. There's a large tin man like statue here now. I don't remember seeing this here before, but who know's it probably been here for a couple of years now, as last time i was here the halfway house wasn't burnt down either. Yep, its been a good while since i've done some decent riding, which is going to change for the better. 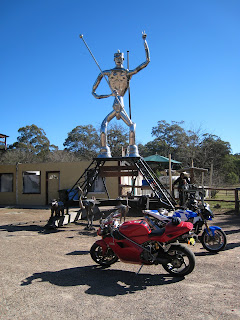 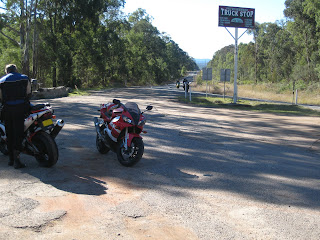 There were about 10 or so bikes at the old servo or that we saw going past, looks like everyone has the same idea as us today.
Then it was off up towards the 16km stretch of some of the best set ot twisties you'll find anywhere in the state. Being winter we decided to take it relatively easy as some sections of the road here are in constant shade all day and have moss and water on them, needless to say that it gets very slippery here. We had some good fun along here even whilst being careful. At the top section a group ride pasted us going the other direction with the lead rider and tail riders wearing fluro jackets. There must have been about 20 - 30 of them. What i don't get on such a great peace of road as this is why the hell you would want to ride slowly in a big group surrounded by wankers that have to organise you to within a inch of your life, isnt that what governments do? After this section it was a lunch stop at the Cockfighter tavern and fuel up at Bulga servo. The roast of the day at the Cockfighter was brilliant i must say. Washed down with a cold beer. Very nice. 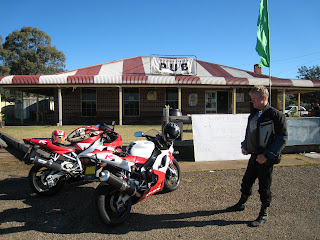 We left the tav around 2:00pm and headed back down the same way we came up. This time it was a bit of a quicker run going down as we had already scouted out the road on the trip up, and knew where the wet patches were and where we could do some scratching....
We were having so much fun that i forgot to stop and take some pics, maybe next time.
Posted by Chiller at Monday, June 20, 2011