Why does this always happen to me?

Owning a pure bred sports bike or in my case the R1 which is basically a race bike, it has a couple of draw backs. No I'm not talking about it being an uncomfortable SOB, I'm talking about being able to carry anything at all. You see there's no space under the seat, the tool kit that came with the bike can't even fit under the seat, there are 2 allen keys under that little rear seat and there's not even enough room to put in a credit card so carrying anything is pretty much out of the question. You couldn't even fit a pair of under pants under that seat, even if it was a thong!

I've been putting off getting any luggage carrying equipment for the bike as most rides I've had my wing man Slomax with us who had a spare pannier available in his aprilla I could put my backpack in. Not that you can fit much in a backpack. I have a five day ride coming up and the Slomax won't be on this ride and I don't fancy living out of a backpack for that long so I decided to do something about it.

So I got my ass down to Motorcycle accessories supermarket in Auburn and picked up a Ventura rack and 47 Litre bag for the R1.

The ride is on tomorrow so I got out in the garage this afternoon to fit it up. Half way through I realized that the people at Ventura can't count. There are 4 bolts and only 2 nuts in the pack.
So I Consult the parts list that came with the rack that will be the answer they must have forgotten to put 2 nuts in the packet. Sadly the Ventura people must have hired someone who can't count either as the parts list also states 2 nuts. Now how in the fuck am I supposed to fit 4 bolts with only 2 nuts. After spending nearly $600 on this which is pretty outrageous really for 2 pieces of tube steel and 1 bag they can't even get the fucking number of parts in the kit right. Jesus I don't need this shit only hours before the ride. 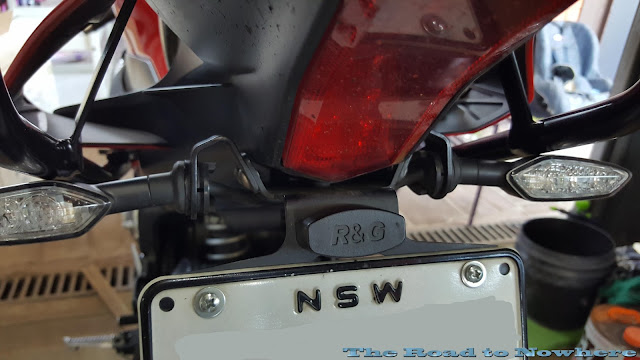 So again what to do? Well looks like another trip to bunnings to buy some longer bolts and some washers. I lowered the tail tidy with some washers and slightly bent the bracket on each side so there is a 2-3mm gap between the indicator and the rack. Job done for the moment.

So now here is the touring R1 race bike. Ventura people give yourselves an upper cut firstly for your lack of checking your shit and secondly for your pricing. I shouldn't have to take a trip to the hardware store to pick up shit that was supposed to be in the kit. Now lets hope this bag is water proof. 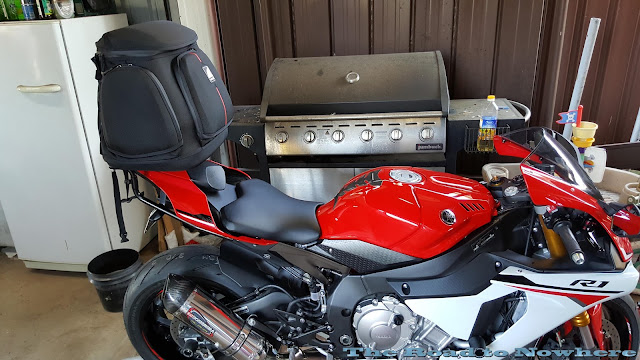