This is the first snowy ride that I can ever recall not having a hangover on the second day, feels good to be riding these roads without a hangover. We always manage to drink too much on the first night, makes me wonder then that Bushpig isn't on this ride and we aren't hung over.
Hmmm could be something to that. 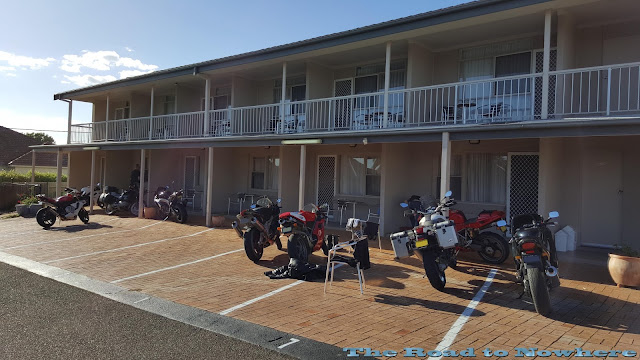 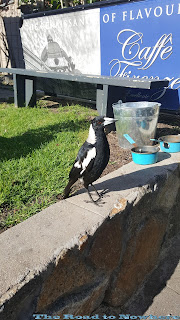 We'd stayed in a the Holiday Lodge Motor Inn i Narooma this time instead of the Dromedary in Tilba. Nice clean tidy rooms with fridge and coffee, tea and only $50each. So much better than the swag I paid to sleep in last year on the floor.

A quick scrambled eggs & toast breakfast across the road filled a hole just nicely. This little fellow on the right even turned up and was waiting to invade some one's plate for breakfast. He looked just as hungry as we did.

Just as we were about to leave another heavy rain shower came over which again I got into my rain suit which was a good omen as this must have been what kept the rain away most of the day, I think it was Ant that said "hey don't take that thing off"


Yorks trip plan had us going down the coast road to Tathra instead of the Princess Highway. This was a good call as the coast road is much better than the main highway, quite a few twisty sections heading along this section with some nice coastal views. We passed by a little place called Bournda, where I'd spent a couple of weeks on our school trips away back in the day. Brought back a few memories. 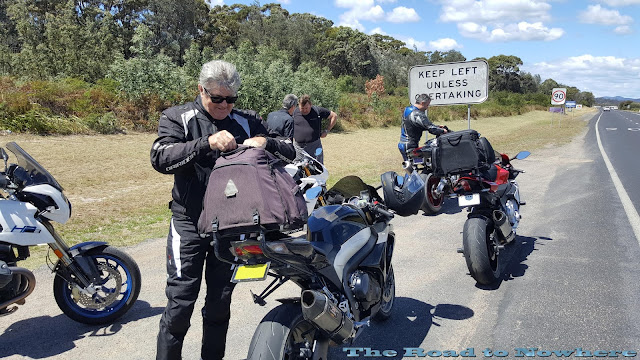 Kingy wanted to have a go on my R1 so he and I swapped bikes here for the ride across to Bombala. At Pambula South the other guys pulled into the petrol station, I thought that I should splash a couple of litres in the R1 but Kingy was riding it and we went straight past. About 10kms up the Mt Darragh Rd he flagged me down as the fuel light was on. It had been on for 5km's. Kingy said it was about 70kms to Bombala, there's no way the R1 was going to make that on 3-4 litres of fuel. We swapped back and I told him to go on and I'll go back and fill up. A couple of minutes down the road the others came flying past with full tanks, D'oh. So I pressed on back to Pambula South and filled up and high tailed it back up the Darragh Road. I was having so much fun that I actually overtook 4 of the group about 5kms out of Bombala and just pulled into the petrol station behind the faster guys. They were a little surprised to see me I think. I Did 80kms and used 8.4 litres of fuel, err the devil made me do it honest.

We soon continued on down to Delegate and on the Bonang Highway, one of the Victoria's hidden gems. 1080 curves in 105 kms or so it is said, I couldn't be stuffed counting them but obviously someone did. There is now only about 1 kilometre of unsealed section on the NSW side after delegate which means there is only the 11km's of unsealed section right in the middle, not too bad but we were hoping to beat the rain before it turned the dirt into mud. It was a quick run down to the rest place where we all regrouped. There was one interesting moment when a skippy thought he would jump across in front of Marks Ducati, it looked close to me but he says it wasn't. 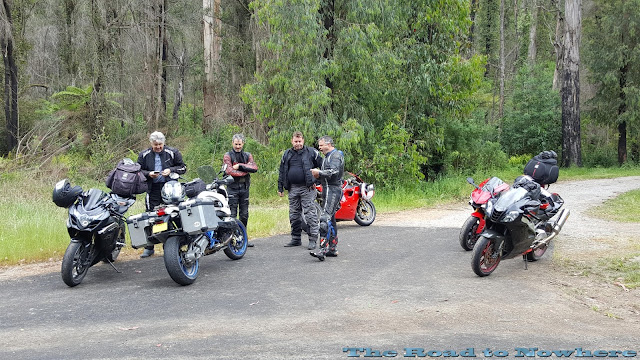 Once everyone had caught up and had a bit of a chat everyone was in agreement that we needed to get to the Brewery before they close at 5pm. Amber at the brewery promised us nice beer and nibblys, who could argue with that? The bottom section of the Bonang has become very broken up with lots of patches on the road, its in need of some decent repairs. We didn't bother to stop in Orbost and continued through to a petrol station on the main highway where it proceeded to dump with heavy rain. We all got into our wets to head out for the last 30 minutes of the day. Soon after we arrived in Bruthen wet, tired and ready for alcohol. 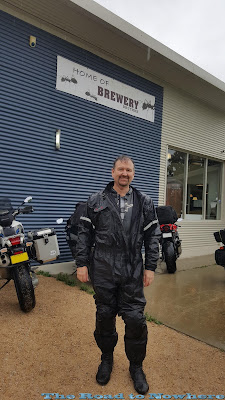 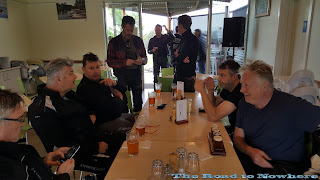 Arriving at the Bullant brewery through the heavy rain everyone was relieved and just wanted to get stuck into a ice cold beer. There was a band playing out the back of the place, I wish we could have arrived a bit earlier, still we stayed for about an hour and then hit up the pub for the night.


The Bruthen Inn Hotel was a nice place to stay with some newly renovated communal bathrooms with dormitory style bedding with 2 bunk beds per room. There were many beers and too many red wines drunk that night, by the looks on the faces the next morning there were a few hangovers, I was still feeling great.