One of our good friends Rick( better known as Doctor Kwok) had changed jobs and was moving to Brisbane. Stu came up with an idea rather than trailer the bike up to Brisbane that we could ride up there. I initially scoffed at riding my R1 that far in 2 days, but when I looked into it a bit more it was only about 500km per day, that's do-able I thought - despite the protests from my buttocks and we hadn't even ridden anywhere yet.

I took the annual leave for 2 days and waited and it wasn't until the week before that I actually finally decided that I would go. They say every trip you don't do you'll regret it later and how true those words turned out to be. No one ever said on their death bed I wish I had worked harder - NO ONE, so screw work I'm out here. Bring on the bikes, roads and beers and good mates, besides I've never ridden further north than the Oxley Highway so it was time to change that.

DAY1
Leaving early Saturday morning we headed up our usual weekend riding route via the Putty Road, stopping in at Grey Gums so Rick could meet up with a couple of friends who were out on a ride today. One of them had a beautifully restored Norton Commando. I loved the paint work on the tank.

We continued on up through the 10 mile of twisties on the Putty road and up to our first fuel stop in Singleton. The highway patrol were out in force today as we saw 3 from grey gums to the top end of the putty but we were exceptionally well behaved.

I wasn't looking forward to the next section of road which is the Gresford to Dungog goat track and then onto the Buckets Way. It has been bumpy for years and my bike isn't suited to these minor bumpy back roads, some of which are no longer roads but rather a section of patch upon patch until you can't see any road anymore just a series of patches everywhere. Needless to say by the time I got into Gloucester I was glad to get off the bike. The country side through here is absolutely beautiful but the road surface is oh so bad. The Buckets Way isn't as bad as the Gresford Section. 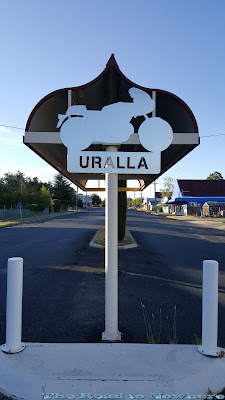 A quick rest stop for fuel and lunch in Gloucester was what I needed and a great recharge for the ride up the thunderbolts way to Walcha. Some of the road surface through here is pretty ghastly but some is good and new so you need to be on your toes. We stopped in the little town of Uralla at the Top Pub on the Saturday night which is your standard country pub but boy they have excellent pub food, everyone commented on how good the food was all washed down with a nice cleansing ale or two of course. The rooms are quite small but are clean and a bargain at $50 per person.


DAY 2
After a quick breakfast at the cafe across the road from the pub we were under way by 9am on Sunday morning headed north to Armidale. We turned off towards Ebor on the waterfall way, this road was heavily wooded by the sides of the road and looked like it would be kangaroo country but luckily we didn't see any. As we passed the Dorrigo turn off the road got quite tight and twisty and wound is way through the forest with big tall gum tree's to either side, I was having too much fun to stop and take any photo's, oops. We took a quick break by the roadside in Nymboida but soon continued on into Grafton for fuel. 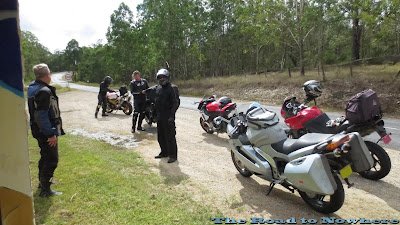 We got a rain shower leaving Grafton and it was slow going up to casino as this was generally straight boring highway. We were soon coming into Kyogle for a late lunch around 2pm I think and rolling into town I saw a familiar blue R1 parked up outside the Kyogle Bakery. My brother had ridden down to greet us and ride back to Brisbane via the twisties.

This was a good day for me personally as this was the first time I've actually ridden with my brother since 2003 with the exception of the tour of New Zealand which was now 2 years ago. Gee time flies doesn't it? A chicken salad roll from the bakery filled a hole just nicely and now I was feeling a bit more motivated for the next part of the ride into Brisbane via the Summerland Way and Mt Lindesay Highway.

The ride along the Summerland way runs along some beautiful country and is mostly sweeping bends up and over hills and through farming land until it winds its way up to the turnoff near woodenbong which we turned right and headed for Beaudesert and Brisbane. 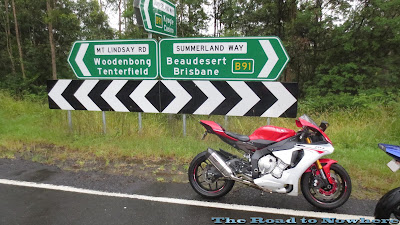 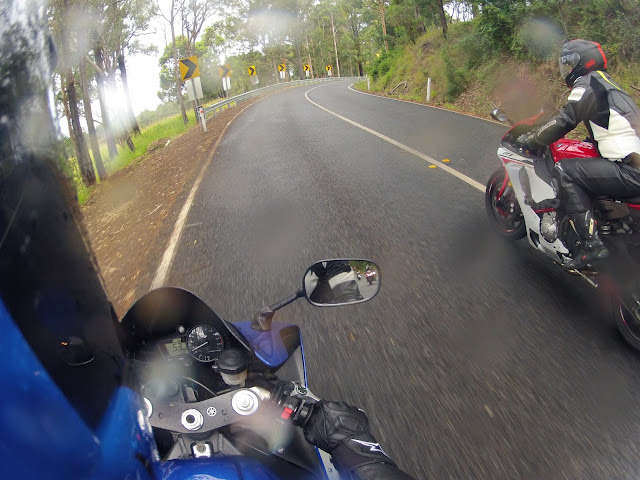 There is this fantastic set of tight twisting bends on the NSW side of the border that climbs up the hill and crosses into Queensland and comes down the other side of the range in another fun-tastic set of twisties, but these ones are quite rough compared to the NSW side. The road winds its way down around the ranges with great views out to Mt Lindesay which we stopped for a quick photo. Most of the way through here there were light spots of rain, enough to make the traction control light on my dash start blinking on/off. Yeah we had some fun through here and the roads were mostly empty due to the inclement weather.

Dave followed me pretty closely down the mountain range with his Gopro on, should have got some good pics there bro. There were a few more showers here and there before we stopped in for a coffee break in Beaudesert. You know you've been on a sportsbike for too long when the wooden seat at the coffee shop looks comfortable. We got back on the road again and Dave was riding like a mad bastard on a mission through the trafficked hills to the M1 motorway, he must have thought he was in motogp. This is where he departed for home and we rode to Rick's house for the night. More beers were drunk but nowhere near as much as the night before as we were all pretty knackered from the days ride. 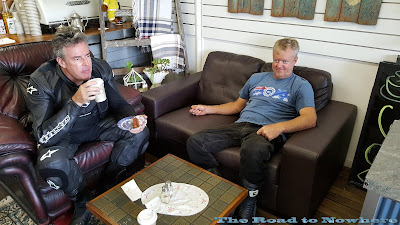 DAY 3
We met Dave again the next morning waiting for us on the on ramp of the motorway and he took us up the Advance Town road and back towards the NSW border. This was a fantastic smooth bit of road with long sweeping bends and a few twisties thrown in. The road followed around a large lake and then up to the NSW-QLD border crossing which looked out over the Numinbah Valley. Beautiful views from up here and the road was fantastic if a bit narrow in places but no traffic really. We stopped at the border for a couple of photos before moving on. I made Dave ride my R1 along here, I noticed his suspension was totally shagged and the motor felt a little asthmatic but it still went well. 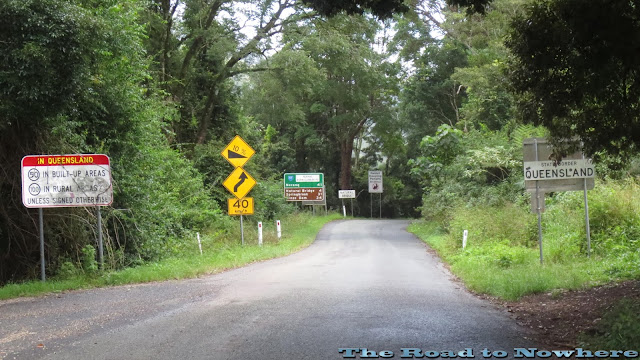 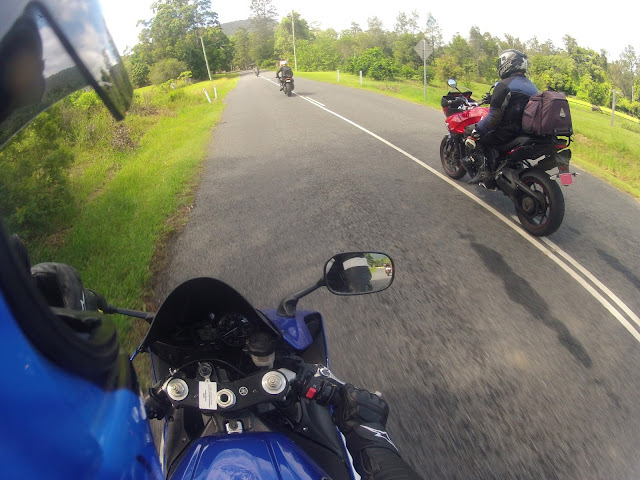 The road down into Murwillumbah and on into Kyogle is one fantastic ride with sweepers, tight twisty bits and everything  in between. Its got everything you ever want in a road including great views and lush green countryside. It seemed to go on forever some bits were smooth, some were rough but it was one of the best rides I have had in years. We stopped off for coffee in Uki. The coffee here was good. The road had many great spots for photo opportunities but it was so much fun I just couldn't stop, it was that good.

We stopped in at Kyogle again for fuel and a quick drink and this is where we said our goodbye's to Rick and Dave as they headed back to Brisbane via the Summerland Way that we had ridden yesterday but this time in the dry. It was decided here that instead of riding back the same way we would ride the Bruxner Highway which turned out to be a fantastic idea as the ride out from Casino to Tenterfield on the Bruxner is another top bike road. After you go through the little town of Drake there is 25km of twisting bends that wind up the Great Dividing Range until you come to the top and the road comes into Tenterfield. Parts of this road remind me of bits of the Putty Road. 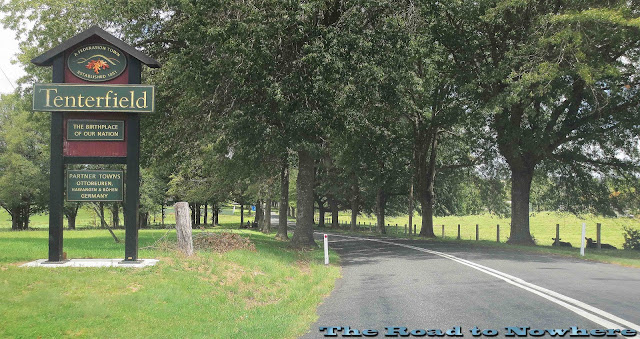 From this point on until we were back in Uralla for the night at the Top Pub it was 2 hours of fairly straight Highway miles which was broken up with the occasional rain shower then a complete downpour followed by a couple more light showers just to keep us on our toes. It was along one of these rain shod sections that both Dave(ZX-10R) and myself had some rear wheel aquaplaning along the road, real heart in the mouth stuff.

DAY 4
Day 4 turned into the reverse of day one with us back tracking along to Walcha and onto the Thunderbolts Way to Gloucester for a coffee stop. As we ascended Barrington Tops we found we were running up into low lying clouds and just breaking out at the lookout again. 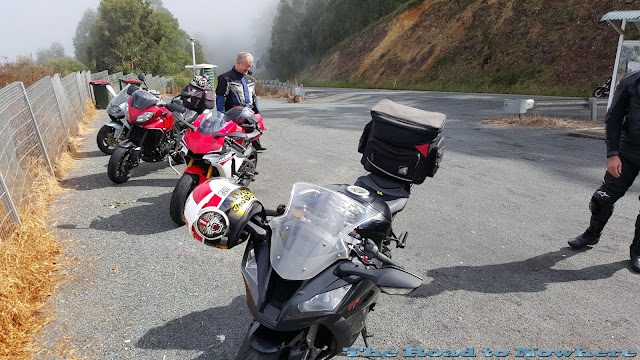 There were a few more spits of rain along to Dungog as we made our way back to singleton. Both myself and Geoff had been keeping an eye on our tyres as we both had done 4000km on them before the trip started and they were just about finished but in this last bit Geoff's Pirelli seemed to wear a lot faster than the bridgestone I had, that's not to say my bridgestone wasn't shot, it just wasn't down to the canvas showing. 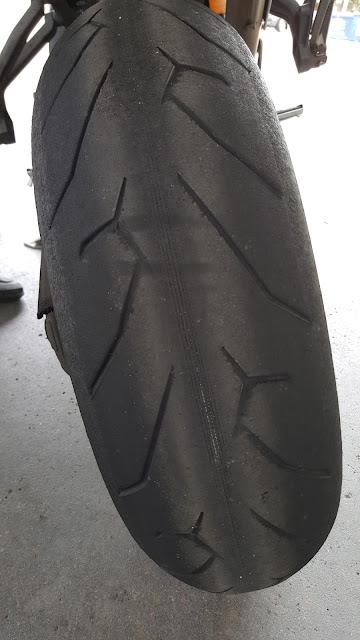 Coming back down the Putty Road we hooked into the 10 mile twisties with renewed vigor that is until I came around a 55er with 2 kangaroo's standing in the middle of the road. Yeah that slowed me down real quick.

Getting back into Sydney's peak hour traffic at around 4pm required a wind down beer before we all departed in different directions. Cheers fellas was a great ride, thanks for the company we rode on some great new roads and we will have to do it again some time maybe once my ass have recovered. 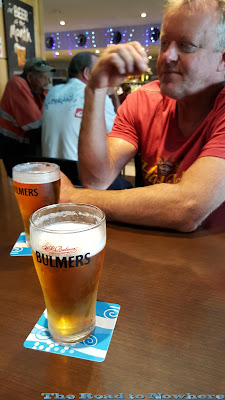