It's been a long, long while between posts and there's been a number of reasons for that which I will get to soon and this post is a week late as I've been procrastinating on what to put in here. I've still been lurking on here and reading other bloggers posts and occasionally putting in my 2 cents.
A couple of bloggers have asked how my gear box replacement went on my new R1. Well I had taken it down to Team Moto in Blacktown were I had bought the bike and dropped it off on a friday afternoon about 3 weeks ago. I picked it up on the saturday the following week. They said their head mechanic did the work and it took him 14 hours to complete. I got the bike home and it sat for 2 weeks before I used it again.

I'd also had the bike in over christmas to get the damage fixed from the parking incident last November, which I picked it up again in late January. Then just as I got my bike back my dad was rushed to Royal Prince Alfred Hospital after he suffered a heart attack, he was put in for an immediate triple bypass. Sitting there post op watching my Dad in the ICU one gets to thinking, about how quickly that your world can come crashing down in an instant. One minute everything is travelling along nicely then bang, your faced with the reality that you might never see one of your loved one's ever again. That's pretty hard to deal with in a short space of time. My dad has been my inspiration since I was growing up, when he did lots for us which I'd not even realised until this point. Dad has helped both me and my brother service our bikes, tune Flyboys race bikes and in general just do things that dads do for their kids. I couldn't have asked for a better Dad. Luckily the triple bypass went well and he is now well on the road to recovery.

This was also the reason why my brother appeared on my blog recently, as we don't see much of each other these days as he is in Brisbane and I'm in Sydney. We just happened to stroll into the Dues store to have a look around as its right next to the hospital on Parramatta road.

Dad finally went back home about two weeks ago where mum can look after him. Which after a couple of months of being worn down by just travelling to work then the hospital everyday then home to sleep and repeat, to say I was worn out was an under statement.

Geoff suggested we get out for a ride seeing as my gearbox was now fixed, and to tell the truth I couldn't wait to get on the road it's been so long since the last decent ride. He suggested a quick blat up the Putty Road to blow out the cobwebs so to speak. I though I better take it easy as I hadn't ridden in 2-3 months and also partly to make sure that nothings wrong after having the bike in a million pieces.

It was a cool 23°C day in the morning heading up out of Sydney. World Super bikes were on at Phillip Island today so maybe that was a reason that there was a distance lack of bikes out on one of Sydney's premier bike roads. It didn't perturb us at all as less traffic is better.

I quick stop in at the old half way house for bacon and egg rolls and I was feeling great. I was gelling with the bike, the gearbox seemed a bit notchy in 2nd and 3rd or was that just because I was lazy changing. I'm not sure. 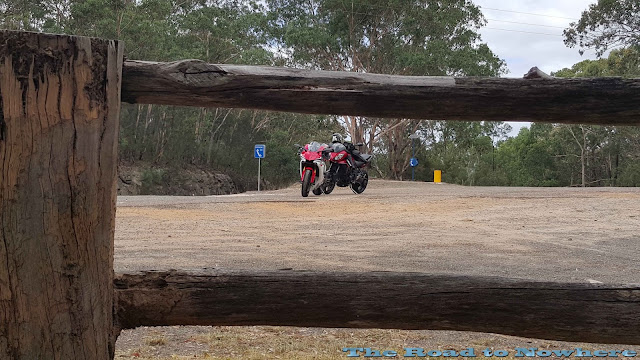 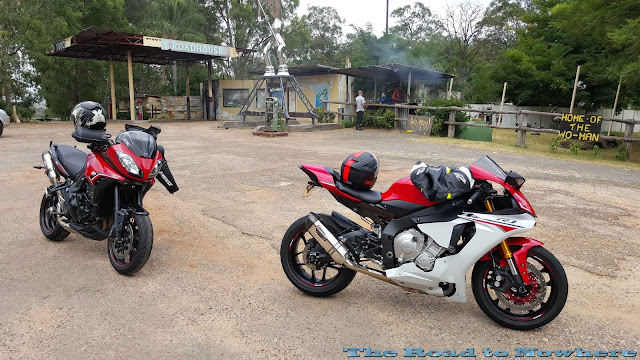 Being back in the saddle and riding through the 10 mile of twisties at the top end and it was just me, the bike and the road. Full concentration on my riding was the stress reliever and the other inspiration I had been missing. The Tyre's copped a good beating along here and knee sliders were scuffed. Didn't I say I was going to take it easy? Oops! Anyway a fantastic day was had blasting through the hills, it only took one ride to get my mojo back. Now when is the next ride?