This review is my personal thoughts on the Michelin Pilot Power Pure(PPP) tyre from a complete novice(I'm no racer) although I'm no beginer either. Following on from Geoff James excellent post on the Michelin Road 3 tyres and his great advice on them I thought I'd give you a run down on my thoughts on these tyres.

1. Performance - Most of my riding is on the weekends which involves riding some of the local twisties or as the yanks say canyons. Its mostly fast sports riding, throw in a bit of city riding and some touring to get to the twisties, its been a long time since I've done some tracks days but I used to use Pilot Powers for track days and never had any problems what so ever. I've been known to put a super soft race spec front tyre in with a standard rear. My theory is that you can never have enough grip on the front, the rear is not as important. Most of the time the front tyre is only half worn out by the time the rear is gone so with the super soft front I'm getting more confidence inspiring tyre to do the same amount of work. I always replace front and rear at the same time, I think its false economy to put in a new rear with an old worn front. The front is now out of shape so handling is not quite as good as it should be. 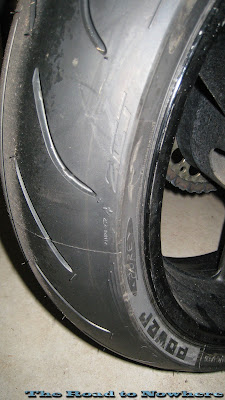 2. Lifespan - Life cycle of the tyre is also an important consideration. My expectation out of a sports tyre is anywhere from 4-5000kms. My first rear tyre on my R1 only lasted 2500kms before becoming completely bald on both the centre and the edges. That to me is far to short on the road. I read on Geoff's blog he's getting 13,000kms out of a set of tyres. I was quite amazed really to read that, I'd never heard of that many km on a motorcycle tyre before. But for me I want to know that I have the grip available to ride the way I do. I'm not sure the PR3 will have the levels of grip that the PPP will have. but who knows they will probably still be better than me.

3. Cost - Obviously cost is a big factor as well. I don't want to pay huge prices for the tyres either. This one kind of goes hand in hand with the life cycle of the tyre

The tyres that I was using previous to these were the Michelin Pilot Power 2 (PP2) which I was very happy with. These were sports tyres that I got very good wear out of and they had good levels of grip. Before that I was using Dunlop D208 sports tyres and there were quite a few big differences in the 2 different tyre brands. Some of which were tyre life and the levels of grip from cold to hot. The dunlops heated up much faster giving higher levels of grip earlier, where as the Michelin took a lot longer to heat up to give the same amount of grip. The dunlop also couldn't match the Michelin in the wet for feel.

A few years ago Colin Edwards, world superbike champ and motogp legend tested the PP2 on his motogp machine at Sepang as seen here in this you tube video. Check out 1:51 where he is smoking em up out of the bends. Wicked stuff. Love his initial comments on riding on street tyres.


If Colin can push these street based tyres to the limits like this to be within 8 seconds of his motogp time then there is no way that someone of my skill level will reach the limits of this tyre. I'll hit my limits before the tyres do.

So most of my riding on these have been sports riding or sports touring, 95% of the time in the dry. I try and not ride in the rain anymore if I can help it. When they first went on I had my full touring rack+bag on the back high over the back wheel and coming down some gentle slopes I'd relaxed and removed my hands from the bars the bike started into a small slap of the bars that if I didn't grab it soon enough it would soon develop into a fairly large slap. I'd check the alignment with only the marks on the bike itself which looked good but as Geoff says this could be a mile out. So that may be a problem. It hasn't really been a problem after I'd put some K's on the tyres. Could it be loose steering head bearings? I'm not sure.

The front is confidence inspiring with great feel and feedback. The tyre doesn't flop or fall into a curve it just turns in nice and steadily, exactly proportional to the rate that I'm counter steering. I'm usually running pressure at about 34 psi front and 36-38 at back. If I want to do some really hard riding I might want to drop them a bit, to say 31-32F/33-34R but I don't usually do that much anymore. This tends to wear the tyre a lot faster, nice if you like to get balls of rubber across your tyre. If I know that I'll be doing a lot of straight road riding which I normally don't do then I'll put the pressures up to 36 F/41R just so they don't wear as fast.

These pictures are after 4600 km's on these tyre in sports riding mode.


The last trip that I went on to Wee Jasper was the end of these tyres as you can see from these pictures below, the tyre is now on the wear marker in the centre and almost on the side. Time for a new set. The speedo reading was 58,792km which means I got 6360km's out of this set of tyres. Not too bad for a sports tyre.

Tyres with 6360 Km's on them at the end of their lifespan. 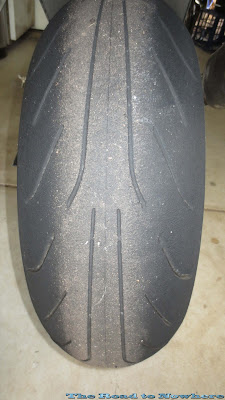 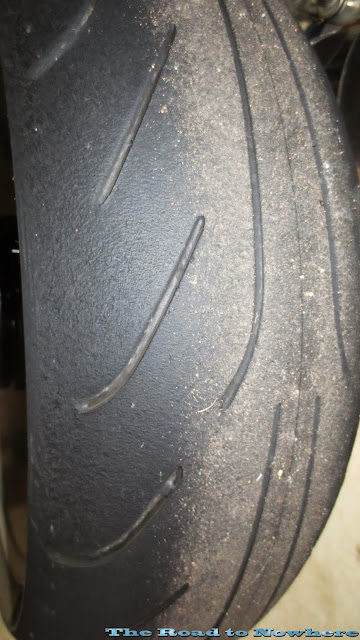 I'd noticed on the way home that they were starting to get hard to turn into a bend as they seem to have developed a flat spot in the middle making initial turn in a bit harder than usual. Now they are on the wear markers in the centre its time for new rubber. I don't mess around and try and get another 500kms out of them. I think that it gambling too much and also false economy. I'd rather fork out for some new tyres which will also transform the handling again to super quick turn in.

All in all I quite like these tyres as they seeming have plenty of grip during spirited riding are also very confidence inspiring in the rain and with almost 6500kms out of them are excellent value for money.


EDIT: A few riders have mentioned that on some of their bikes that they have had the front tyre square off on these tyres. It seems if you own a heavy bike 230kg+ that this happens with. I had no dramas like this with my R1 but it only weights 201kgs.
Posted by Chiller at Saturday, May 25, 2013