A ride opportunity had come up with Wayne and Geoff on Sunday/Monday. With no one having any idea of where they wanted to go, I quickly reeled off the Oxley Hwy as we hadn't done that in a long time. But unfortunately for us, all the accommodation at Gingers Creek had been booked out. I had been thinking of the Ride down to Wee Jasper as I had read about it in the Australian HEMA motorcycle atlas as one of this country's top 100 Rides. So it was decided that we would do that, as none of us had done that one before.

We picked up Wayne in the Blue Mountains on our way out to Oberon on Sunday morning. It had turned a bit chilly but not enough to use my neck warmer, although I had mine with me. But it soon warmed up to 20°C(68F) and we were having a great time out on the bikes. We had taken the road down into Jenolan Caves, but did not stop in today rather pushing on into Oberon for a late morning tea/early lunch.


Leaving Oberon we had normally gone out through Black Springs but instead this time we took an alternate route out through shooters hill road. This was a fantastic little jaunt over the crest of hills in between the pine forests.This was a spirited ride both on this and the return trip. We didn't stop again until we got into Taralga where we had stopped for a quick break/drink at the pub. The full autumn colours were out on show for us here in the main street of Taralga.


After Goulburn there wasn't any alternative but going up the Hume Hwy, for 82km of excruciatingly painful straight Hwy miles to which we'd nearly got done by the local constabulary. I was doing an a little over the limit and enough to be given a ticket, it was a 110kmh zone when I saw him. He must have been asleep or something to get away with that one. This is where I though F*#k this, I don't ever want to ride the Hume again.

Not long after we'd gotten into Yass and turned off to our final destination for the day, Wee Jasper. The road into there has just about every sort of bend there is. It's a fantastic motorcycle road, which eventually comes out at Tumut. It's a bit unfortunate that the road from Wee Jasper to Tumut has about 20km of dirt otherwise this would be the best way up into the snowy mountains on the way to Philip Island.

Here is a short video of the road down to the bridge over the Murrumbidgee River on the way.


Here's another short video of me chasing Geoff up the hillside after the bridge over the Murrumbidgee River. Riding into the sun at the end of the day was quite challenging, going in and out of the shadows and blinding sun. It's also where Geoff encountered a caravan halfway round one of the bends, a bit surprised me thinks was he.

This was one seriously fun road, but there was a lot of Sunday afternoon traffic which included about 10 rescue vehicles and probably 5 or 6 police vehicles. Geeze and in the middle of nowhere too.
The ride out in the morning was a lot better than the ride in as the sun wasn't directly in our faces as it was late in the arvo. The scenery around this area was spectacular even in late autumn when it was brown and dead looking. It would be very pretty in spring time. 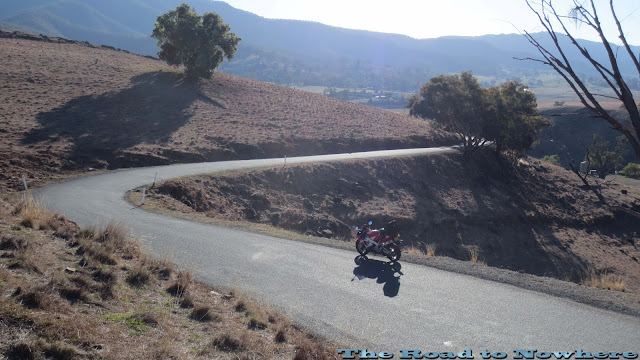 By the time we had reached the bottom of the hills and crossed the Wee Jasper bridge it was time to hit the only place in town that was open, the pub. The pub used to be an old horse stable back in the 1800's but has been turned into this rustic little pub. It looked quite nice. Everything about the area was fantastic. Then we met the publican who it turned out was an aged woman who could talk the ears off a rocking horse. I think the term that came up was very eccentric. Although she did a pretty mean pizza that was spicy just like I like them. 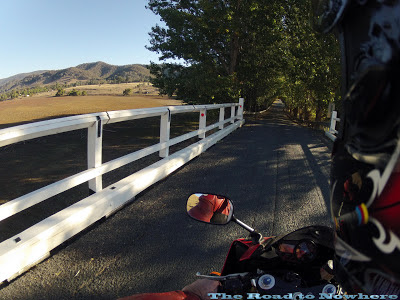 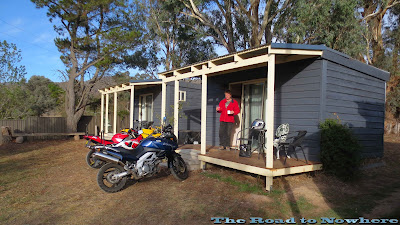 The other thing we noticed as we grabbed a beer and walk up to the bridge for a look around was that there was a blue fibre optic cable hanging through the tree's and tapped onto the bridge. It turns out that this is part of Gillards NBN roll out to which we found out later was put in to feed the local school for 10 kids at the cost of ½ million dollars. And wow the absolute quality or workmanship showed through for that ½ Mill. This is where our tax money is going on useless crap that isn't even installed correctly or to any wiring standard known in this country. The cable was hanging in the tree's and had some electrical tape holding it to the bridge. Whoever did this needs to be fired. I can't wait till we can get rid of Julia in September. You can see the cable just above Geoff's head in the photo below. 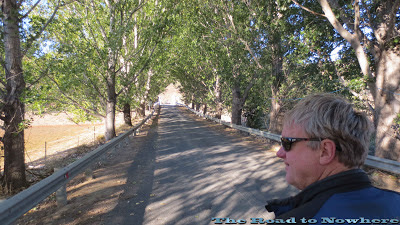 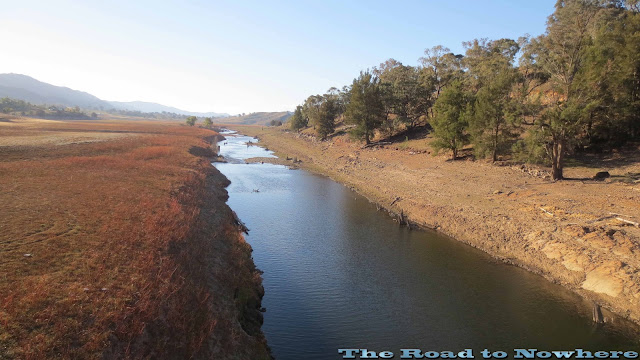 Monday morning started with the short but oh so much fun ride out of Wee Jasper the way we had come in. For some reason none of the images on the Gopro turned out today, they all were coloured orange and worthless. What a bummer as some of these would have been great in the early morning.

We stopped in at Yass for breakfast, and from here decided to take some new roads we haven't been on before. Anything to keep off the dreaded Hume Hwy. We tracked up through Crookwell and then across to Taralga, which there was 5kms of good dirt, but the ride through here was fantastic. It was a great way to avoid the hume hwy and was winding country side. We were all pretty chuffed about these new roads we'd found. 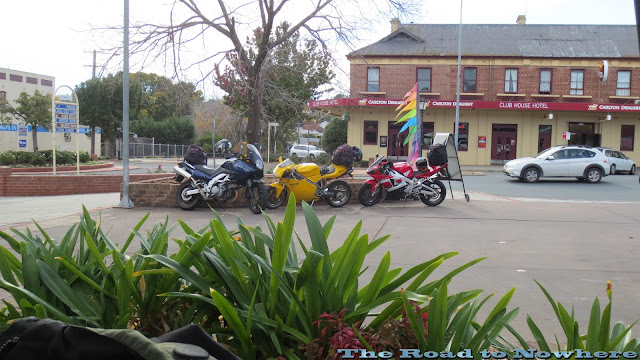