I haven't been out on the bike for a month and when I got an email this week from Wayne asking if anyone wanted to go for a ride this Sunday to have lunch at the Grey Gums cafe on the Putty Rd, I was like donkey in Shrek "Oh pick me, pick me!". It was just to be the 3 of us today with Bushpig coming along as well.

It was cold this morning when I got up the thermostat on the wall said it was 5°C(41°F) so I got the neck warmer out ready to go. After oiling up the chain and getting ready to go it was off to the servo for some air in the tyres. On the way I thought "crap I forgot the neck warmer" but it turned out it wasn't that bad out and I didn't really need it thank god. The pressure must not have been to bad because the bike feel like it handled ok, when I checked it was only down by 5 psi front and back. Bushpig and I were to meet Wayne at the servo Wilberforce at 10am which we got in a couple of minutes early. I was expecting to see Wayne there waiting but he wasn't there which was unusual.

Bushpig checks his phone and finds he has 2 messages, one from Wayne saying the Duck won't start because of a flat battery and no jumper leads so he won't be coming. Bummer for him. The other message was from York saying he'd be there at 10:30. That was unexpected that he was coming so it was good we would still have a crew of 3. Whilst waiting for the Aprilla to turn up I had a pie for breaky and an iced coffee. A red VFR with 2 people on board pulled up in front of us and we kept on chatting. The guy took his helmet off and I immediately recognised York. Well that was a big surprise, I didn't know he was going to rock up on a VFR. He had his lovely wife with him for the ride today.

After greetings we headed off up the Putty Rd towards to our first stop the old half way house. It was very cold when riding in the shadows of the mountains and the road was still very wet so caution was the order of the day here. We arived at the half way house and stopped to warm up. Carbon fibre exhaust pipes are great hand warmers as long as you don't touch any of the metal end parts.

Whilst warming up in the beautiful winter morning sunshine we decided to have a bit of a look around. The guy that owns the place is a bit of artist/sculpturist. He makes all these weird sculptures out of metal like the big wo-man statue out the front of the place. Out the side of the place in the paddock is a bunch of different metal scultures. The first two I saw immediately got my attention as they were of one of my all time favourite cartoon characters. It was Bender from Futurama. They were made out of old gas bottles and cylinders. The guy had done a fantastic job of them even right down to the cigar in one hand and a beer in the other. I could almost hear him in my head saying "Bite my shiny metal ass" 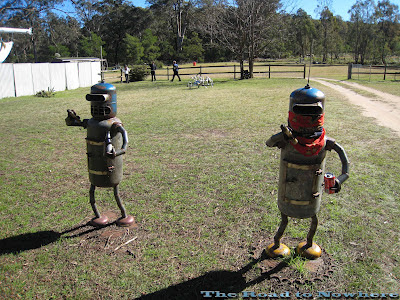 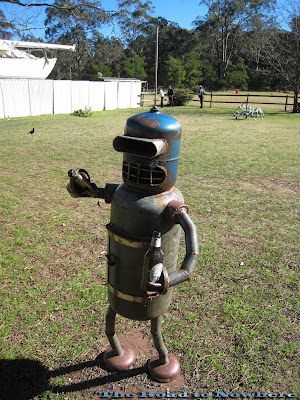 For those people who have been living under a rock for the last 10 years and don't know who bender is check out some of his famous quotes in the following video.


There were also some other funny looking objects and sculptures around the place. I quite liked the mail box it looked like Ned Kelly with a gun in each hand. To those non Aussie readers Ned Kelly was a famous Australian Bushranger from the 1800's. Carved into the chest it said "Such is Life"
There were quite a few bikes out today considering how cold it was, although I guess our weather is really year round riding weather when you think about it as it topped out at about 15°C(59F). We headed back down to the Grey Gums for some lunch. There were lots of bikes at the cafe, and why not its a great place to stop for a break have a drink or food and watch all the bikes coming and going. I had a hamburger there today and it was fantastic it came on a damper bun. I'll have to get a pic of the burgers here next trip to show you how good they look.

Here is the ride back from the halfway house to the grey gums, I've shortened it by about 5 minutes. York I could see your suspension bottoming out and rebounding at 1:45 making you run a bit wide. I guess you are not used to that soft VFR suspension and a passenger.