DAY 7
We started out this morning in Burnie with the boys in blue turning up to have a chat with us. What have we done you might ask? Well nothing really, turns out the hotel owner was mates with a local copper who also happens to love motorcycles. He was on his ZX-12 and gave us some great advise on riding the local roads. And even more handy the location of the one and only radar patrol car in Burnie which was nowhere near where we are going. He seemed to be a really nice bloke for a copper.

With that in every ones minds we headed out back down through Hellyer Gorge. The gorge is filled with 45 and 55kmh bends and certainly is sportsbike nirvana. I remember pushing as hard as possible to go as fast as I could through here after yesterdays sighting run. It always helps to go faster if you've already been through and seen the road conditions. What a rush this place is. We stopped at the end to let everyone catch up and ponder the race, er... ride. Yes that's right, the road is not a race track. 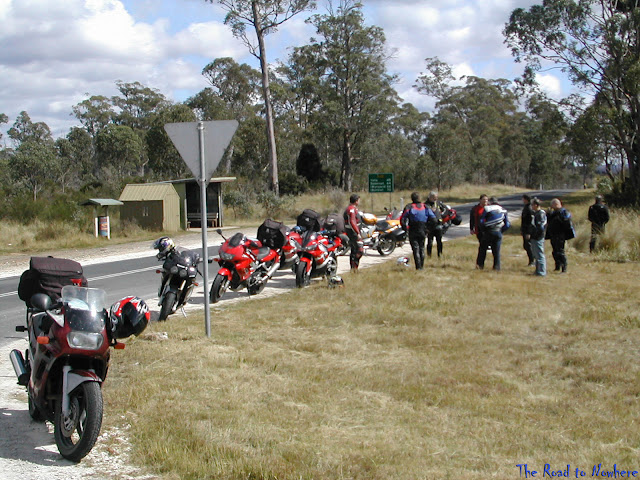 It was then on across the road to Cradle Mountain. There are big open sweepers all along here that we saw the double ton figures along this section, with the bikes in front laying down black lines around the bends and over the crest of the hills here. You could see for miles infront with the road rising up hill and down dale.

After we left Cradle Mountain we headed up to a little place called Shefield. What a lovely little town this is with all the murals painted on the walls of the building in the town centre. From here we headed back south out around Mt Roland. This was a very narrow but twisty road that we had an immense amount of fun on. It was one of those narrow winding country roads that you needed to have a full awareness of everything around you, as you could come round a blind bend and there would be a farmer on his tractor doing 15kmh taking up the whole road type of thing, big potholes or dips in the road in the shadows that needed careful attention to avoid. The ride out around the foothills of Mt Roland was fantastic though. 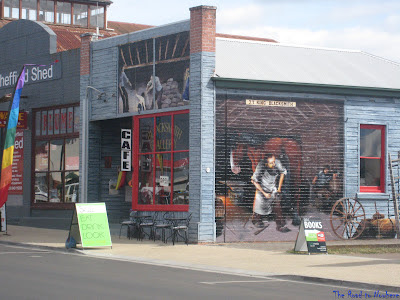 Here's an picture of one of the cafes in town. There were many buildings that had been painted with murals like these all over town it made for quite a pleasant place to visit.

Then it was on over to Launceston via Deloraine which was a bit on the boring side. It was only 50km or so but seemed like it took for ever. Most of the roads we have been on have been very winding and enjoyable so when you get to some straights in Tassie you get bored very quickly. 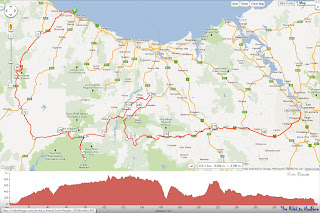 DAY 8
We had to catch the ship back to the main land today so some short rides were planned for today. We headed out east of Launceston to the lookout at Scottsdale for a few photos and then wound our way through some back roads and across the Batman bridge. Some of these roads were a bit on the rough side but then all of a sudden there would be a super sweet section that was really smooth and winding. We figured this was sections where they run the targa tasmania rally, well our guess anyway. 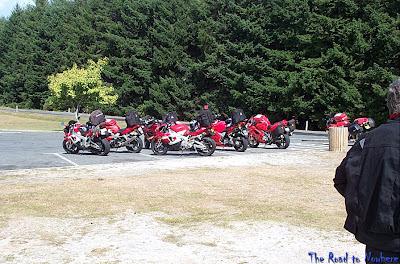 We stopped for a quick break on Dairymple Rd to discuss the mornings riding then continued on over batman bridge and along to Devonport. It was along here that I witnessed one of the most dangerous overtaking maneuvers I have ever seen. One of the guys overtook a car going up a steep hill he was sitting out in the oncoming lane overtaking, over the crest of the hill with no way of getting back into the left lane if needed. He was lucky that there was no one coming the other way or he would have been toast. A shocking display of riding if I'd ever seen one.


We arrived in Devonport in the early afternoon and stopped outside one of the pubs just across from where the ferry terminal is. Everyone was pretty well shagged from the last 8 days riding which was more like 11 for us. We all got fish and chips and sat in the park overlooking the harbour and just relaxed until the Ferry came in. 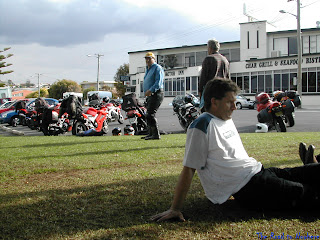 Tassie was a superb place to go motorcycle riding and we were especially lucky with great weather. I would highly recommend riding there if any one is contemplating it, just about anywhere you go in Tassie you can't really go wrong. One of the best motorcycle holidays I've ever had. 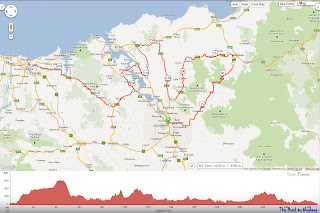