After last months aborted ride attempt i have replaced the rectifier on the R1 and rewired it and now time for a test run to see if all is well.

Geoff had organised a few mates to go for a ride with us. In typical Delmas fashon he managed to ride past my place 2 times without noticing the R1 sitting in the drive way before i headed off after them. Bloody Delmas turning up half hour late then getting lost in my own street....

Anyways, we all meet up about 1 hour late down on the Northern Road and plans are hatched to head down to Kangaroo Valley and Macquarie Pass. We are soon stopped again at Picton for a quick drink and toilet break. Its pretty cold out this morning being around 12°C. 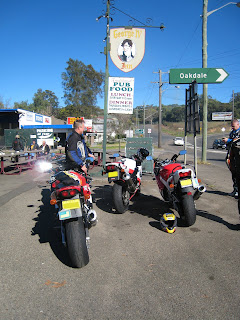 Funny enough there were several other bikers at this place already and they were drinking beer this early in the morning(10:30-11am).
We proceeded on down through Mittagong but didn't turn off to Kangaroo Valley, instead heading straight down Macquarie Pass. The road was a bit damp and it was very cold until we came out at the bottom. Was a slow ride down behind a couple of cars and a wide harley. I thought we might see some harley pieces all over the road as that thing couldnt go around the bends in his own lane.
After a quick stop at one of Geoffs mates and a fuel stop it was back up Macquarie Pass. It was a little warmer by this time and no cars in front to spoil the fun. I had the engine spinning up to 11,000rpm at some points in 2nd gear. This road is still very narrow and treacherous but the surface is really good as it has been hot mixed. It was a good trip back up and we pulled in at the Robertson Pie shop for a quick pie then some of the others wanted a cool beverage, so it was onto Roberston and we hit the Inn. 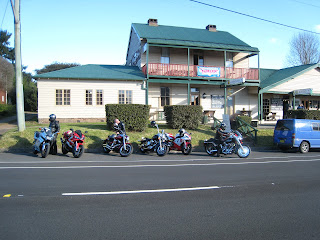 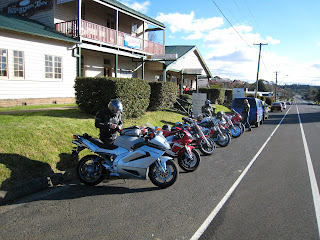 After a nice cold beer it was back on the road again, by this time it was 3:15pm and it was  friggin freezing up in the highlands. An hour and a half later and it was back home to the waiting loved ones.
Well it looks like the new regulator did the trick, now to plan a Putty Road ride with the boys.
Posted by Chiller at Sunday, June 05, 2011