Breakfast was had at one of the local café's as the bakery was closed. Maybe a sign of these covid times, sad we couldn't help the bakery out.
So today's loose plan was to ride across to Mole Creek around the back of Mt Roland and across Cradle Mountain and up hellyer gorge and back again. Sounds great to me. The ride across to Mole creek and around to the look out at Mt Roland was sublime. I had forgotten how good this ride was. It was a little damp but I was still riding like a lunatic and on knobbies. I must say the pub at Mole Creek looked very inviting and I vowed to stop there on the way back this afternoon for a beer.
We were soon at the Mt Roland lookout. Bit disappointing that the Mt was covered in cloud this morning, still the riding has been great even with a few damp patches. 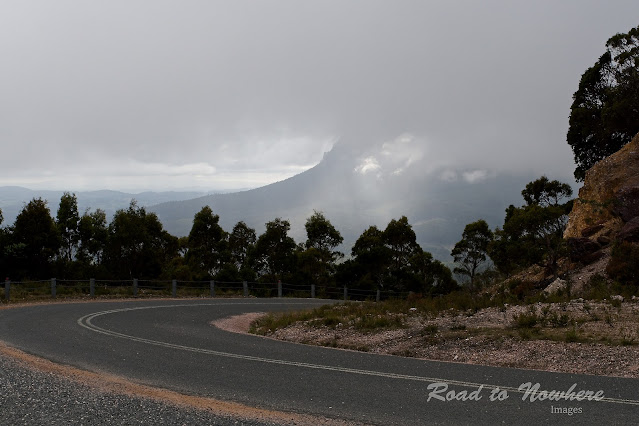 Stu was watching Doug enjoying riding the Multistrada too much and wanted a ride too...............He's like that mates dog that just wants to love your leg every time you go over his place. Down boy. 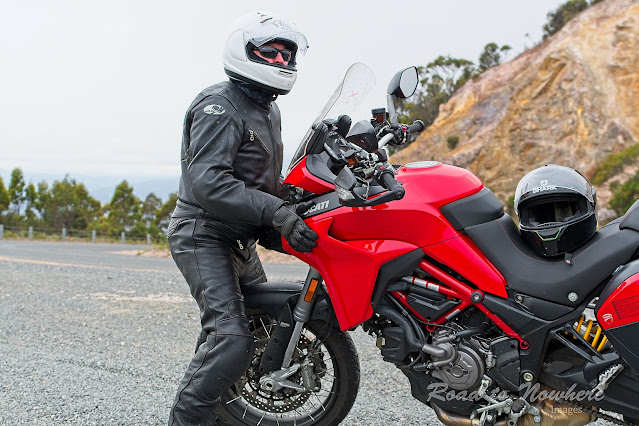 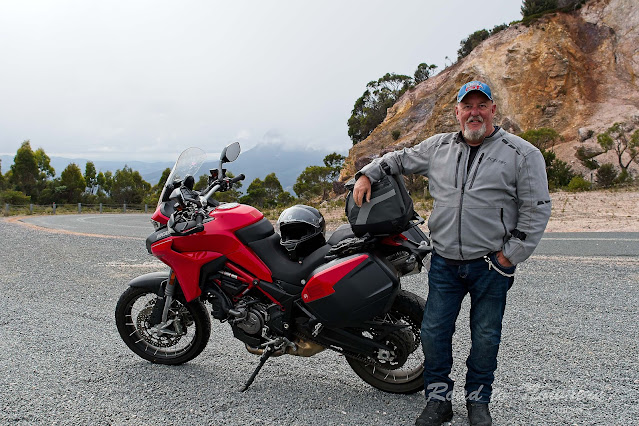 From here we wound our way down the mountain and back up again riding across the highlands along past cradle mountain. It was a little chilly up here this morning and had the heated grips on. Before heading up Hellyer gorge we thought it prudent to take the 5km detour into Waratah so Dave could fill up so he could make it back again. Waratah is a pretty little town with a waterfall in the middle and a nice pub overlooking it. There's a mine off in the distant hills. Unfortunately for Dave the service station was closed due to the proprietors having caught covid. So no fuel and press on towards Hellyer gorge then look for fuel up at Wynyard.

The ride into Hellyer gorge is awesome, I'd forgotten how good it is and it just makes the experience of riding the all too short gorge itself look even better. I think the gorge is only about 10-15 kms but the ride in and out is also fantastic which makes it seem much longer. This rainforest section with huge trees covering the road is such a beautiful bit of road. There were mushroom's growing up some of the tree's. I should have taken a photo of that, photo fail#2. 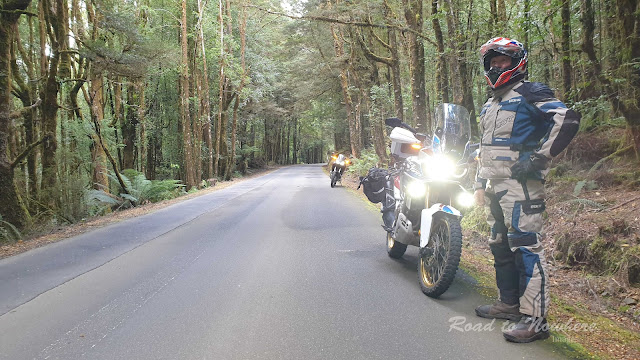 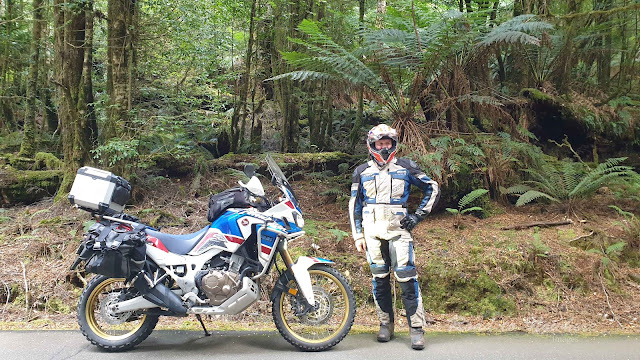 We stopped briefly in at the rest area and caught up with everyone. There was also a group of Harley riders stopped here. After a few minutes they looked like they might get going so I thought I'm going to get going before they do, I don't want my knobby tyred adventure bike getting stuck behind some harley in the best twisty bit of road. Can someone please tell me what the appeal of a Harley Davidson is?

We arrived in Wynyard around lunchtime. Unfortunately the bakery was closing and had virtually nothing left. Oh well we can't save all of Tassie bakery's, there was only the cafe, the pub and subway. We'd have never left if we went in the pub. After a quick bite a plan was devised rather than go back through Hellyer gorge which was so very tempting we went down to Penguin which is a little town on the coast and turned inland and headed up and down through the hills. 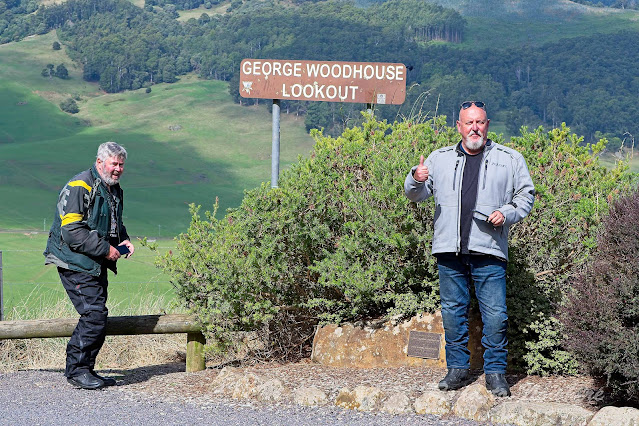 We stopped in again at Woodhouse lookout, the views here are certainly pleasing on the eye, looking out over the valley below with mountain vistas looming in the distance with dramatic brooding clouds. 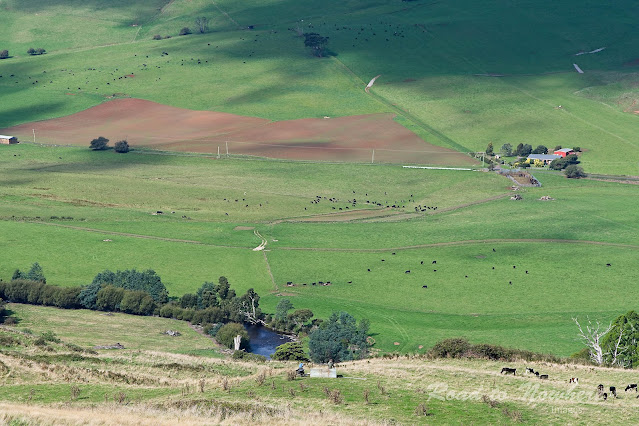 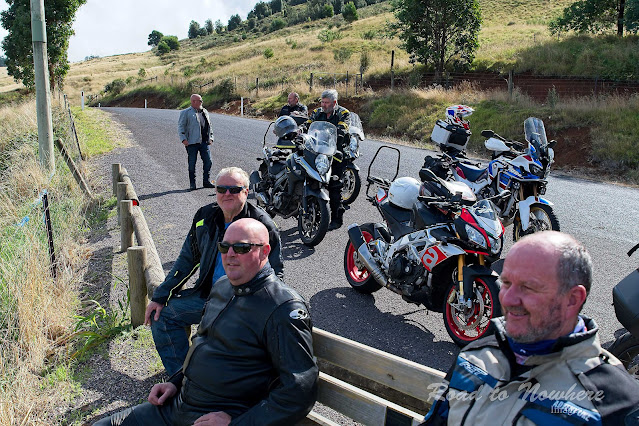 Everyone was enjoying the rest break and the afternoon riding through some of Tassie's finest hilly terrain. What's not to love about this place, little traffic and twisty mountain roads is were it's at. No gravel today. 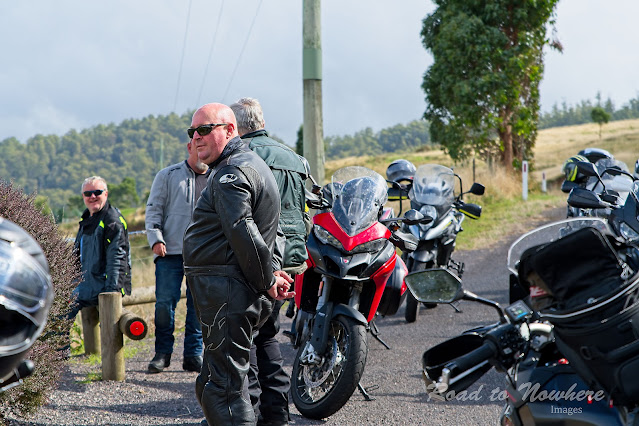 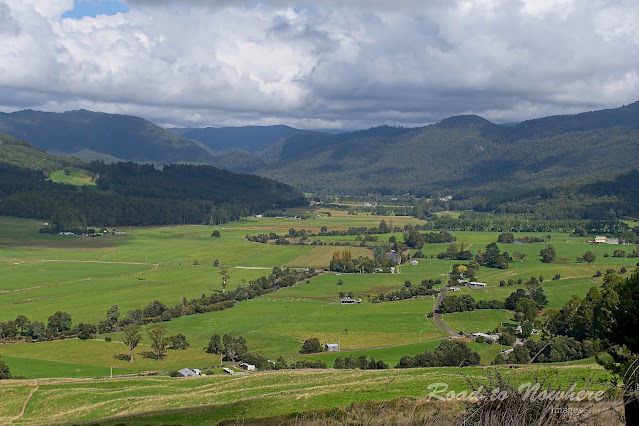 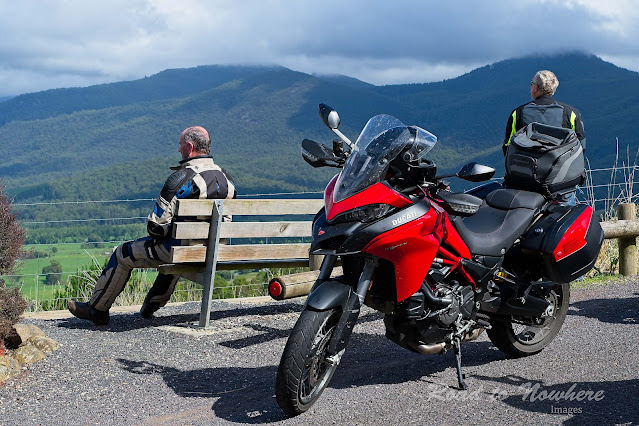 As we left the lookout and came down the mountain there was an T-intersection left or right. I had a feeling that we should go left, the others didn't know either but then suddenly they roared off to the right except Flyboy. I didn't think that was the right way, turns out it wasn't so me and Flyboy hooked a left and the next intersection was a right so we waited for them to come back as we could see they rode down a dead end. Dave and I put our GPS/Google maps on as there were a few turns in here and we didn't exactly know where we were going. 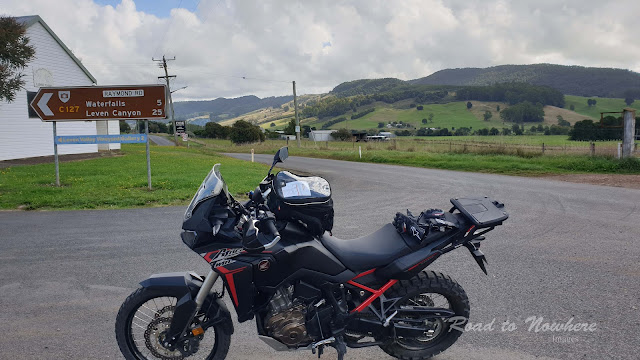 It didn't take too long to get through some of the hilly winding backroads, in fact they were superb fun and I kind of didn't want it to end. But we were soon on the main road back around the back of Mt Roland again. Rounding a bend in the road we saw a dead kangaroo on the side of the road, with a farmers dog firmly attached to its tail tearing it a new one. That dog eyeballed every single one of us as we went past.
Seems the guys had the taste for beers as they were on a mission through the curves, surprisingly I could keep up with them even with the knobbies on, I think I split the 2 Tuonos. Soon we made it into Mole Creek and stopped at the pub. Its only 20kms back to Deloraine from here. The lovely bar maid said they have pints would I like one? Is that bear catholic and does the pope shit in the woods, of course I want eight. Yippee it's my lucky day. 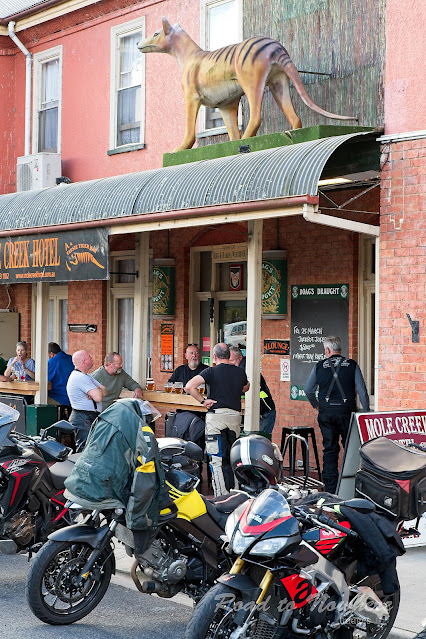 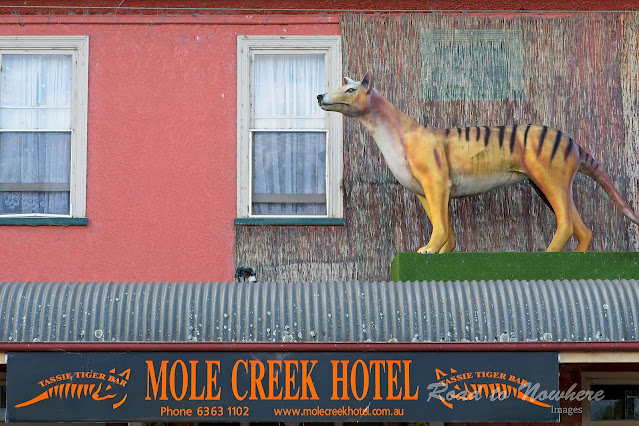 The staff at Mole Creek Hotel are incredibly friendly and Flyboy said the meals are fantastic. Nice little place, Craig bought himself a couple of  T-shirts. They also sell the famous Tassie Tiger pie's, so that's why they are extinct because they are so Delicious, probably why the dinosaurs' became extinct too if the truth be known. 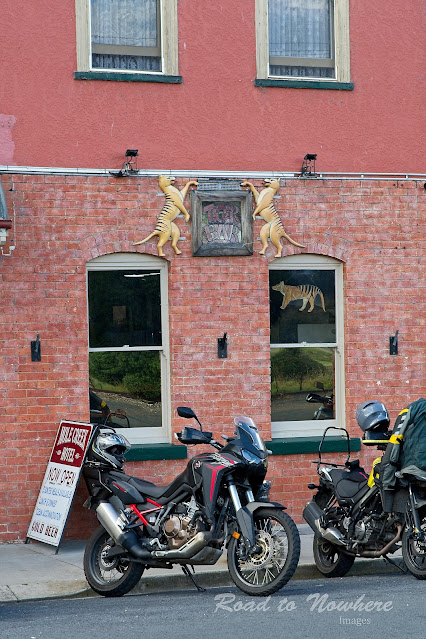 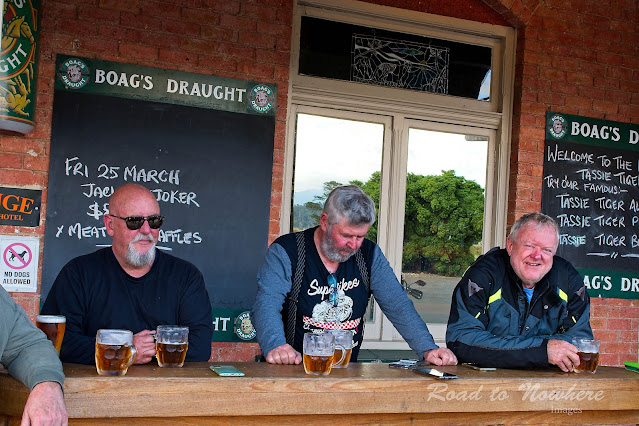 Fantastic views right out the front of the pub over the western tiers, just banging on about bikes and other stuff. I love this stuff. It would be great sitting here watching a big lightning storm come over the mountain watching from the safety of the pub. Beers downed it was time to make our way back to our pub for the night. 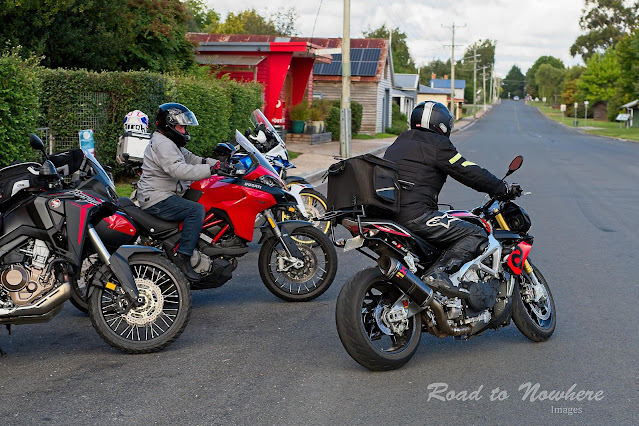 It was also great to catch up with another good riding mate Kwoky who was riding around Tassie with some friends from Queensland. We ended up having diner with their group at the Empire Hotel in Deloraine. It was also Scotty's 60th Birthday so the celebration's went well into the night. I think we sang him happy birthday 3 or 4 times that night. Scotty is also a master speaker with one of the best speeches ever. 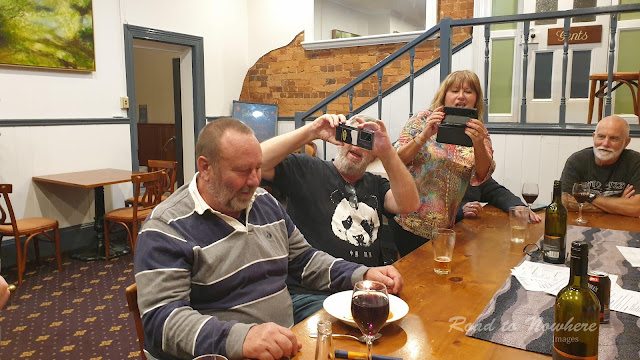 There were far too many bottles of these sunk but it was a fun night. Scotty had a blast as did all of us. 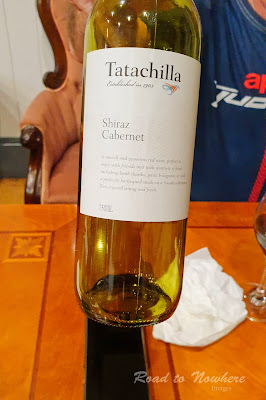