Ride to the Spirit of Tasmania

The beginnings of another epic trip were in the makings on the last night of last years Snow Mountains ride. It was thrown out there to do another Tassie trip. Hell yes was my response after a dozen or so beers.......I'm all in even before I ask the missus, I never did get around to asking her......

Heading off on a cold thursday morning with Stu and Geoff into mist and rain I got to test out the heated grips, these are great. It was a quick stop in at Trappers bakery in Goulburn for the first pie of the trip. The weather was good after this.

Next stop was at Yass service centre to pick up the rest of the crew that had left the day before. From Yass we slabbed it down the Doom & Gloom Highway to Coolac where we then turned off onto back roads to Tumut.

It was another nice ride up and over the Rosewood raceway, I was following along behind Geoff here and a big Eastern Grey Kangaroo jumped out in front of him, just missed him by a couple of metres. Close call for the middle of the day too.

We stopped for a brief lunch stop and to top up the tank in Tumbarumba. The bakery does an excellent chicken salad roll, I couldn't have 2 pie's in a row now could I?

From here I lead the group along the Murray River Road to Tallangatta where the Tuono's required fuel again.  Dave's bike seemed to be extremely thirsty using 3 litres more than Stu's???? An awesome ride along the river today, was flowing nicely with no traffic.

I stopped along the road near Granya gap for a break, when we got going again the others had actually stopped in Granya for the same reason so we had two breaks, before the Granya GP track.

A good fun ride through the gap was had by all and I was really surprised how fast I could push the big AT on knobby tyres. I was a little concerned before the trip I'd be so slow on the knobbies in the twisties but I shouldn't have worried about it, you can still go pretty quickly. The knobbies are fairly loud on the tar though but not a problem with ear plugs.
I lead out and down towards Dederang on the Gundowring road. However I wasn't exactly sure where we were supposed to turn. I just passed a turn off and noticed the others taking it. Well I guess that was the one, then we came into Tawonga and I thought we've come too far, it's back the other way. Oh well I wasn't leading this bit from the back. So we backtracked to the Dederang Pub, about a 30 minute diversion. 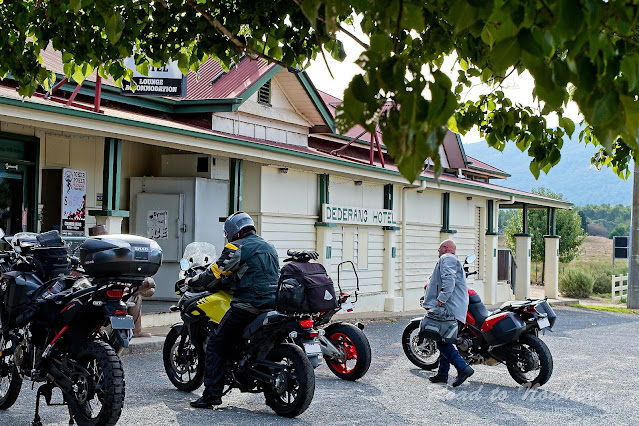 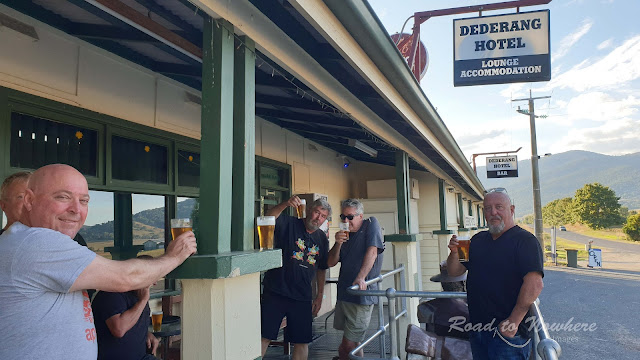 Over a few beers Dave revealed his Tuono had a power commander fitted and his bike was using extra fuel, he needed to fill up now at 200kms instead of 230kms, so I'm getting double the range of his Tuono. That hurts when fuel is $2.30 per litre, ouch. The Dederang Hotel do a great feed and have cheap accomodation about $50 per person.
Next morning I was up early around 6.30am so got ready and took a few snaps. It was foggy and cool out this morning. Pictures on the trip will be from both my S9 phone and my Nikon D500. Usually days like this turn out to be warm and sunny and that's exactly how it turned out. 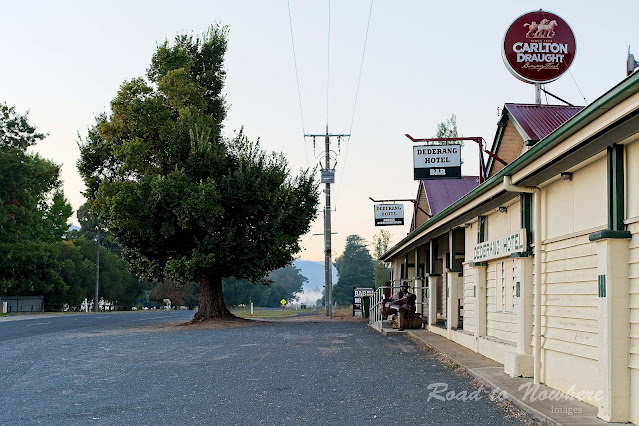 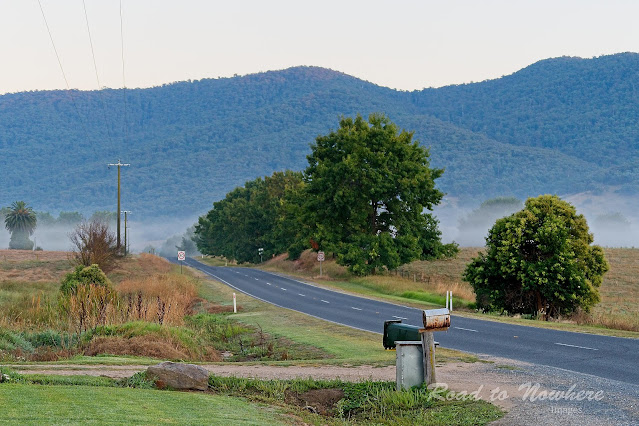 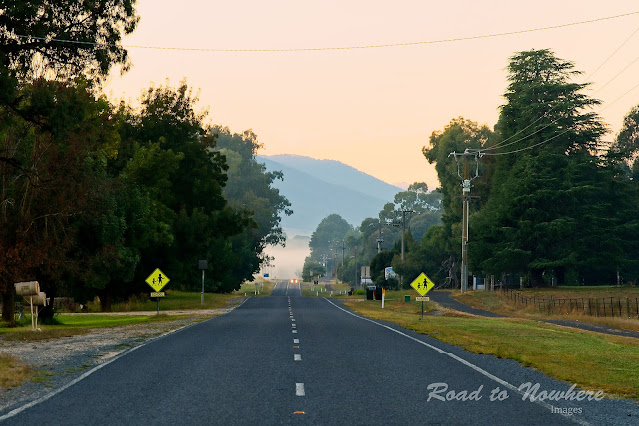 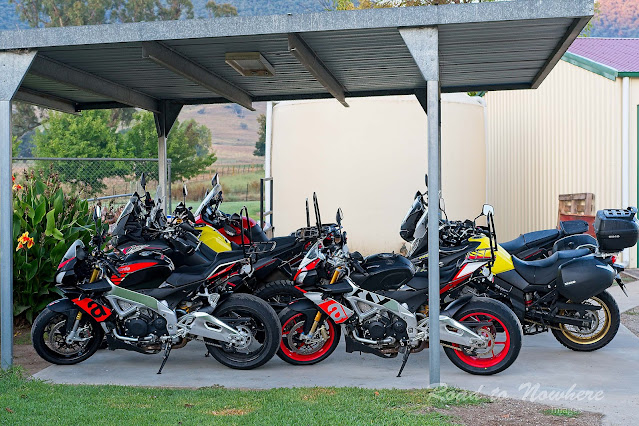 We split up here with Geoff and Doug taking the high road to Myrtleford whilst the rest of us took the Tawonga Gap. I was following Dave down the other side and noticed that my fuel light had come on. I was trying to think where I'd filled up last which was Tumbarumba. I'd forgotten to reset my trip meter so couldn't tell how many kms I actually done. Filling up in Myrtleford I put in 16.5litres(18l total). A coffee stop was needed, they do good coffee here in victoria. The sun was biting quite hard now. 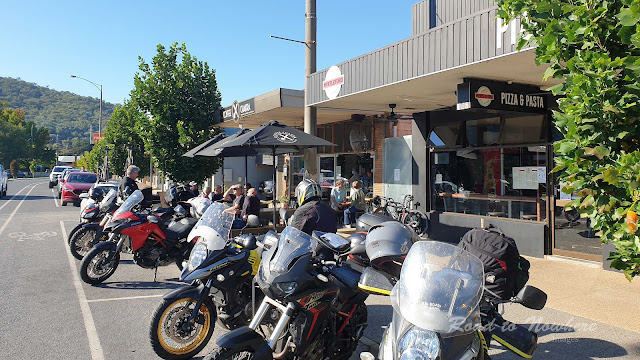 The ride took us up to Whitfield and up through the hills to Mansfield where we stopped at the bakery for lunch. The Mansfield bakery does a pretty good pie and they were flat out today. We then made our way up into the back country from Jamieson to Eildon. This bit of road is bloody fantastic we stopped briefly at the lookout. Looks like a bushfire or burn off in the hills across the lake. 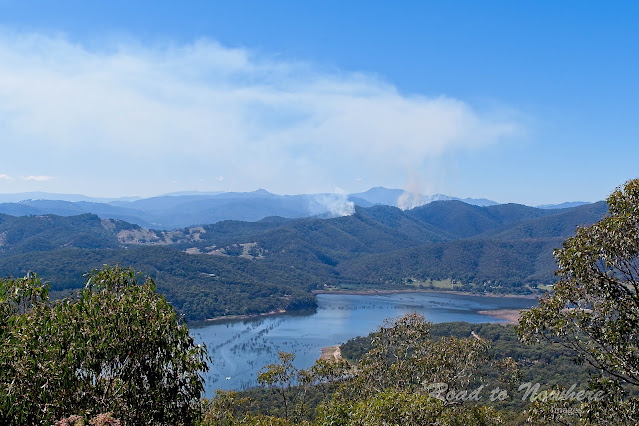 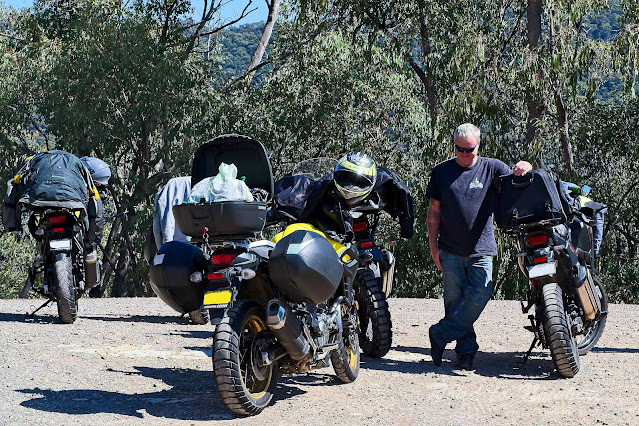 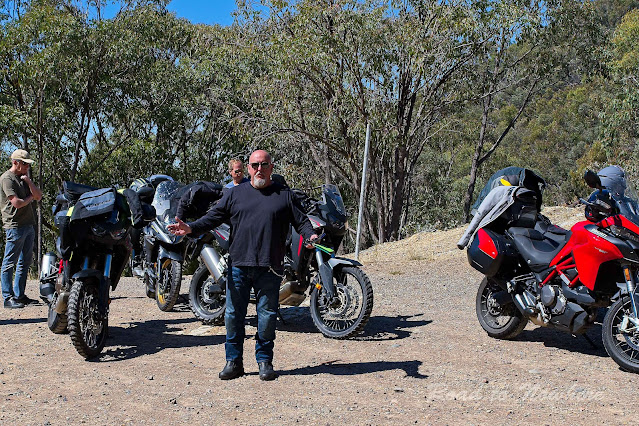 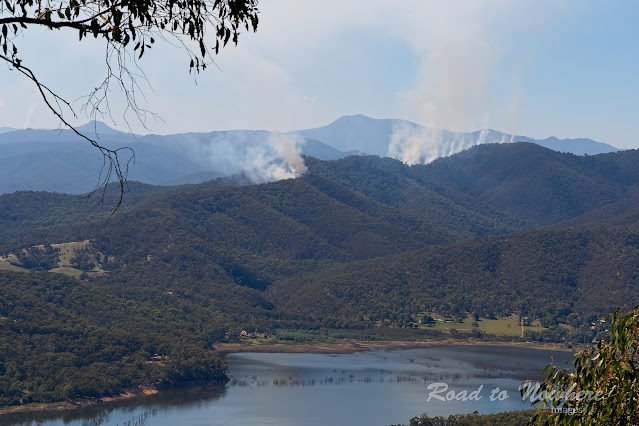 I thought I'd head down the hill a little and get few shots of Stu and Dave coming up the hill. That didn't work out too well for me leaving the camera in single shot mode and having to rush down as I heard them coming up with those booming V4s brapping it up the hill. This was the only decent pic I got. Photo fail#1. 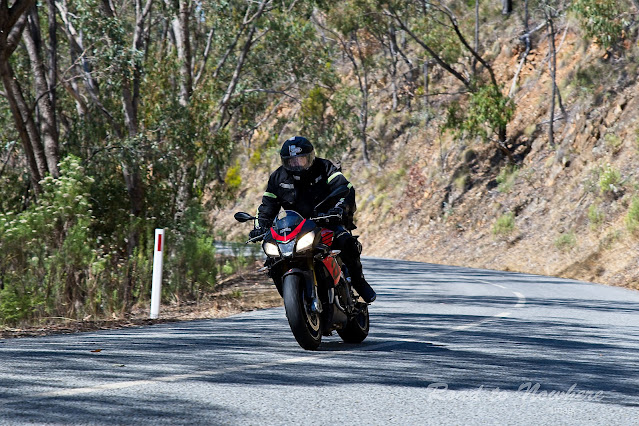 I pretty much rode the whole way from here on my own as I packed away my camera everyone shot off. About 5kms from the end I hit a large stick in the shadows and the front tyre rolled and tucked. That was sphincter puckering, so I slowed a little after that and found the guys waiting for me at the Eildon turn off. 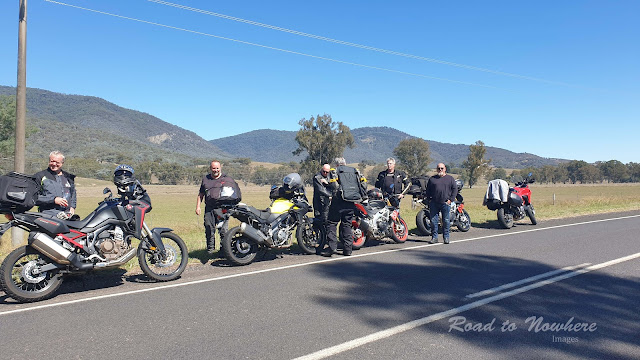 We were now on the outskirts of Melbourne. I'd bought a quadlock just a couple of days before leaving and we were about to enter friday night peak hour traffic with no clue of  navigating Melbourne. I put on google maps with the ferry as destination and it took us out on the northern outskirts on some nice country roads before dropping us down into the thick of it. We made it to the terminal with no troubles so parked up the bikes and got some diner and a beer into our famished stomachs while we waited for the boat. 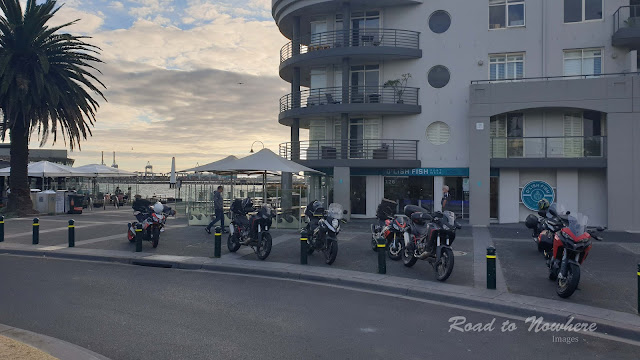 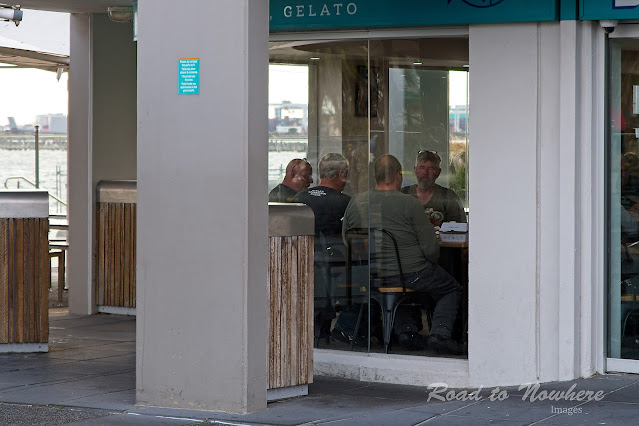 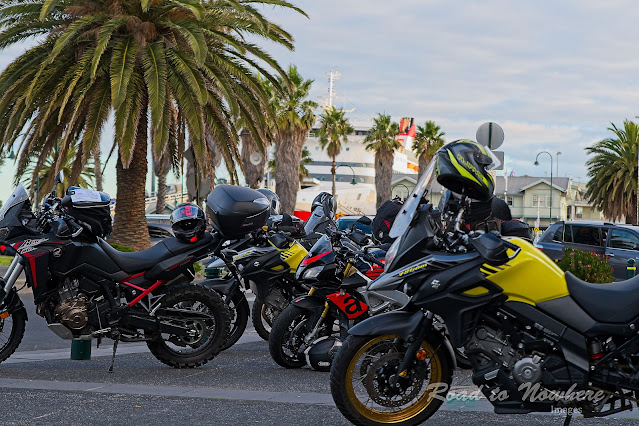 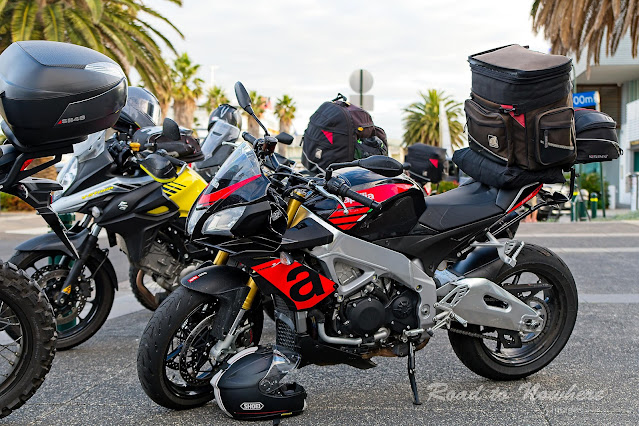 It seemed to take forever to board the boat this trip. I think we waited for 1 and a half hours in the line before eventually getting on the ship. 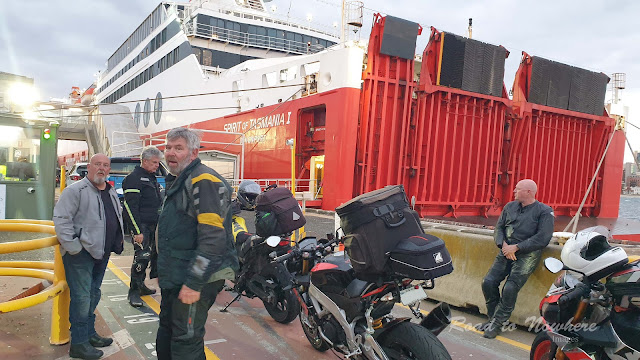 By the time we boarded and got into our cabins and then hit the bar is was around 9pm, we were a bit beat but the beers made up for it. Tomorrow we hit Tassie........
Posted by Steve at Monday, April 11, 2022