Unfortunately for us the road into Cabramurra had been closed and today's trip after a short run to Adelong was going to be back in the same direction, although no one complained about that because these roads up here are awesome.
But first it was to the cafe for a hearty bacon and egg roll and coffee for breakfast then we were off for fuel before tackling the Rosewood raceway. We couldn't have asked for a more perfect day, beautiful blue skies and perfect riding temps.
The January bushfires had swept through the area which has been purposely planted for logging and supply of timber to the local timber mill in Tumut. As the trees were all burned and blackened they cut down all of the tree's leaving the hills completely bare. You could literally see for miles. 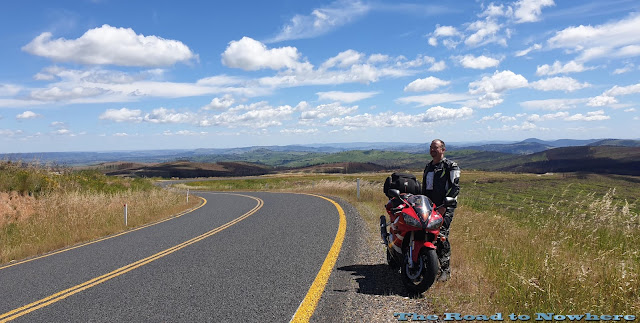 So we rode the 80 odd kms into Adelong before turning around and heading back the same way. This road is very conducive of spirited riding, which may or may not have happened, er I can't confirm or deny anything your honour. 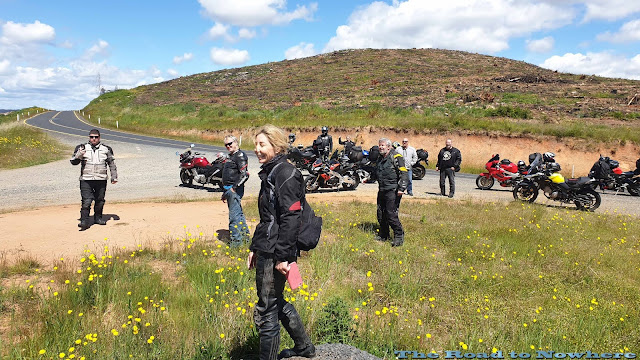 We took a short break to take in the beauty of the area and breath in that fresh country air. Ah that sweet smell of hayfever.....er fresh air. I'm sure Stuart is standing out there alone polluting that air.

From here it was back into Tumbarumba for fuel. A brown kelpie came rushing out of the off coloured dirt on the side of the road almost causing another brown trouser moment, as I didn't see him until the last moment when he nearly went under my wheels.
After fueling up we retraced our route from yesterday to Khancoban where we stopped for lunch.
From Khancoban I lead up into the mountains, today was one of those days when riding, everything was just clicking and riding was a pure joy. That's not to say some of it wasn't hard work but that is its own reward sometimes. Leading the guys down the Alpine way was top fun. The old R1 was still holding its own against the newer weaponry. 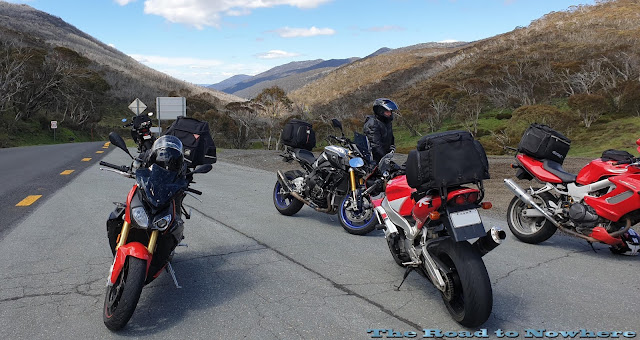 A quick stop at the top of Dead Horse Gap to regroup and take in the mountain ambience. It's so beautiful up here and nice and cool at 1570m altitude. 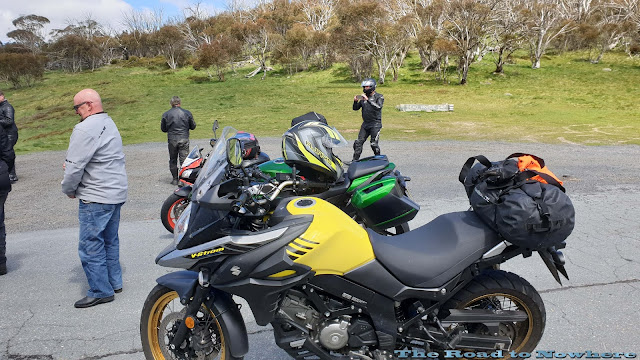 A few other bikes passed by as we chatted. Soon enough we were off down the hill towards thredbo. Stu stopped in briefly to watch some of the mountain bikes coming down the hill. 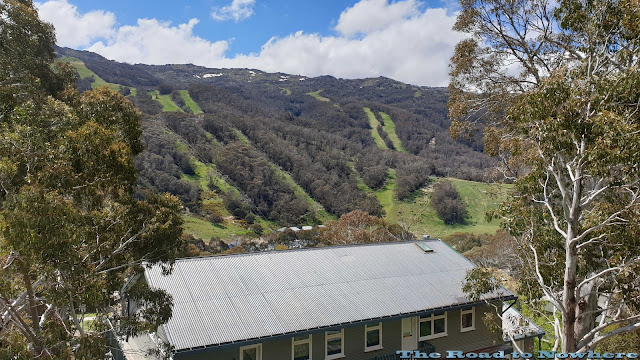 We remounted one last time for the trip into Jindabyne, by then everyone was pretty much settled into their rooms at the Banjo Paterson Inn. This was a great place to stay if not a little pricey, we could have easily shared here to halve the price. Clean rooms, good food and great beer. They Make Kosciuszko pale ale here also. PUB#7 and brewery number 2.

So after another great days riding we retired to the bar a little earlier than we would normally. The place was quite busy and we sat out the front watching various motorcycles pass by whilst having a ice cold beer. Does it get any better? 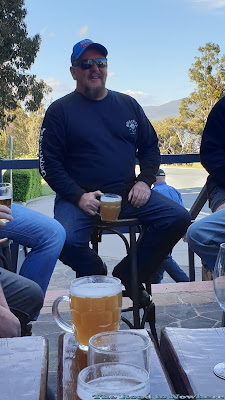 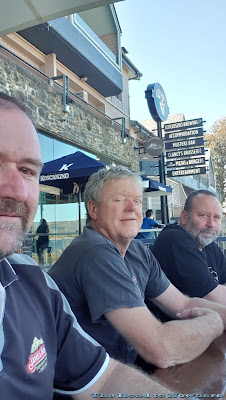 I was up fairly early today, not sure why but anyway I decided I'd eat the continental breakfast provided in the room. Then the guys decided that they would go down to the bakery for breakfast. Damn. I decided not to have two breakfasts and waited patiently. Looking down I found a packet of nails next to my tire. Oh that was lucky I didn't ride over them. 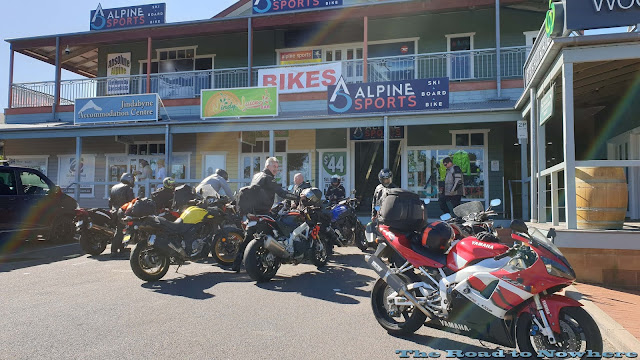 Once the guys and gals were ready we hit the road out to Dalgety and back across the Snowy River Way. I only stopped to take one photo below of the wind farm half way along. Those things are huge when you get underneath them and you can see them coming in the distance for miles away. 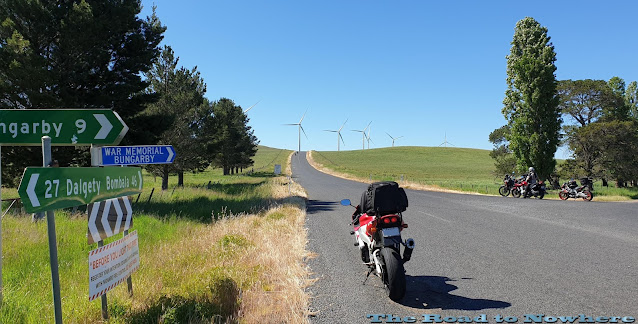 We stopped in Bombala for some morning tea at the cafe. The toasted Ham-Cheese-Tomato samich was ace, washed down with a coffee. We continued on down to the Imlay road. It was 5 years ago since I've been down here. I couldn't remember what it was like to be honest. Jason's Bandit also decided to spew coolant all over the road which it continued doing the following day.
Following along behind the faster riders was a bit of a blast and there may have been a little bit of spirited riding. The road was a little rough in patches but otherwise a fun, continuing down hill set of fast sweepers and straights. It didn't seem to take long to reach the Princes Highway at the other end.
From here we made our way into Eden, where we proceeded to head down to the wharf for fish and chips. Except the shops were all closed. Not sure if from Covid or what but not much was open sunday lunch time. So we proceeded to go from place to place looking for somewhere to have lunch before Geoff said 'Fuck it I'm going to the Pub for Lunch'. So that's what we ended up doing in the end. Can't go wrong with pub grub. PUB#8

From Eden we took the Nethercote road across to Mt Darragh road. What a great little road this was. Good find Stu. Stunning views through this twisty valley road. Best take it easy if you've never been through here before as corners are blind with big drop offs on either side.
Riding the Mt Darragh road from South to North didn't seem as much fun to me. I think the road flows better in the other direction.
Soon we were holed up at the Bar in Bermagui at our digs for the night, the Bermagui Hotel-Motel. PUB#9. The crankshaft ales were flowing like no tomorrow. That and a late night MOTOGP round Stu cracked out the fireball whiskey. A fitting end to our tour as tomorrow was the trip home up the coast. 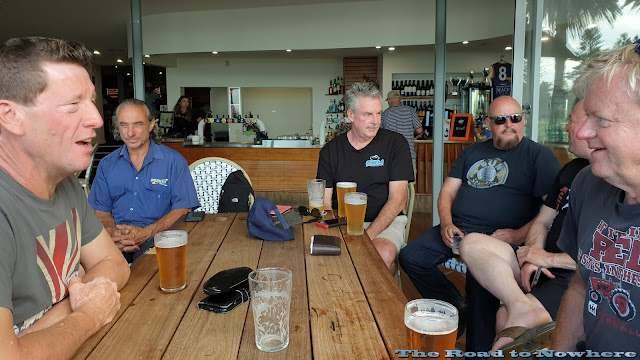 We had a fantastic breakfast in the Bermagui beachside cafe next to the Hotel. It was my first bacon and eggs on toast of the trip, not bad seeing as it was the last day. I wandered over to the beach to have a look. Bermagui is a beautiful place alright.

We'd lined the bikes up out the front of the pub for one last all together shot before taking off for the trip home. The monday traffic on the south coast was absolutely dreadful today, it was like school holiday type traffic and throw in the fact that today's temp hit 38°C the ride up the coast was painful. It was too hot for photo taking today. 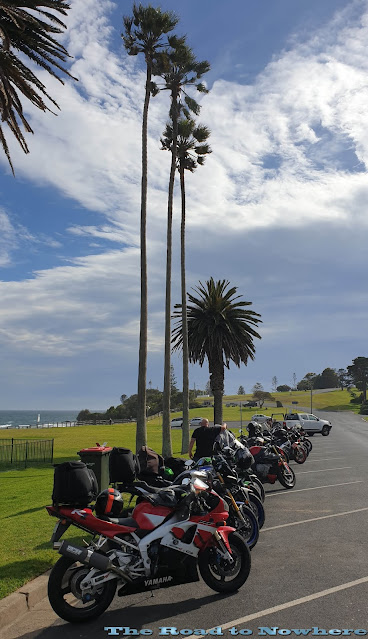 Another awesome trip away with the boys and girls. We saw everything from Beaches to mountains and everything in between. Thanks for the memories guys. Bring on next years tour. Vic should be open by then.
Posted by Chiller at Sunday, November 29, 2020