I was debating whether or not to call this post "The Great Snowy Mountains Pub Tour of 2020" rather than current title as that's probably a more apt title. Yes it is that time of year again where a bunch of drinkers bikers from far and wide get together for our annual Snow Mountains tour.
This year was going to be a little different than the others due to Covid closing the border between NSW and Victoria so we would need to stay within our own state. This would at least give us the chance to explore some of the roads in the Snowy mountains that we haven't been on in years as we tend to bypass them to get to the Victorian alps.

The tour was officially kicking off on Thursday however a few of us wanted to have an extra day of riding and Geoff, Doug, Scotty decided we would start a day early. Meeting at Maccas McGraths Hill we chatted over coffee before heading off. I even put fuel in the bike this time before starting the trip. 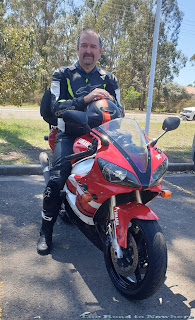 We crossed over the Blue Mountain along the Bells Line before crossing over the Darling Causeway to Mt Victoria and down the hill.
The picture below was purely for starting a fight with my two daughters as they love the Lolly bug. What kid doesn't like lollies. They were most upset with me for not buying them any too I might add. 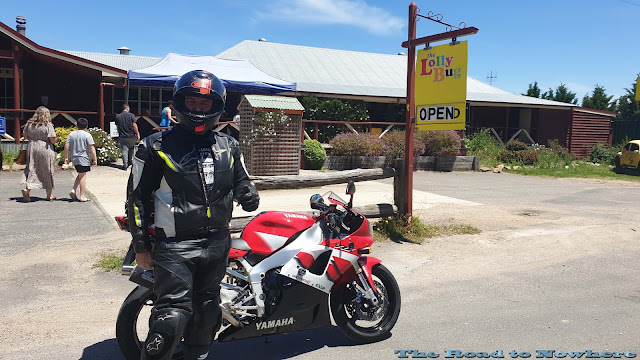 We stopped just along the Jenolan Caves Road for a break, but quickly moved on as someone had dropped a plastic bag with a goats head on the side of the road right next to where Doug stopped. The stench was horrendous. 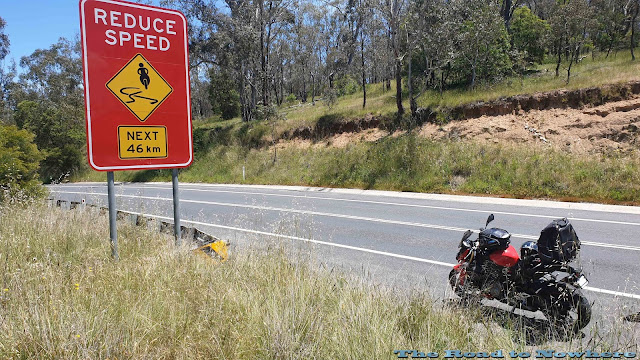 The Plan was to head into Oberon for lunch via Jenolan Caves but that would have been around 2pm by then so we decided to stop at Hampton pub which we've always bypassed and have lunch there instead. 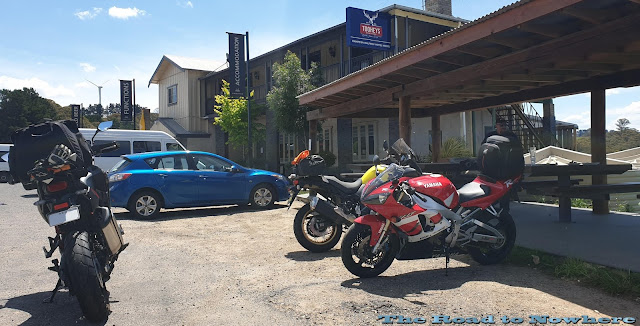 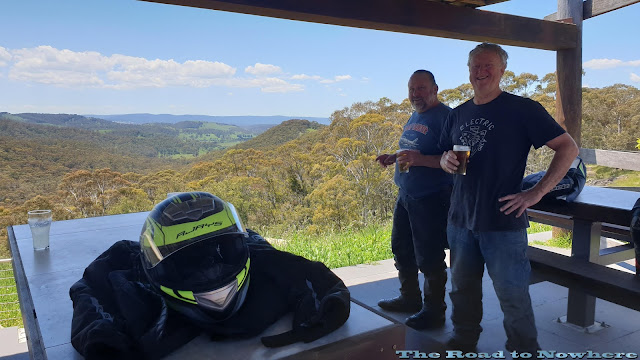 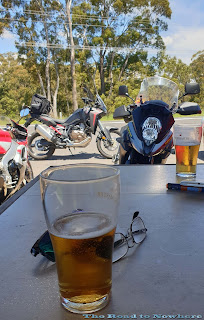 Never having stopped here we had no idea what it was going to be like. And to our surprise it looked like they had spent a lot on doing this place up. The lunches were pretty good if not a little slow but it hit the spot nicely. Pub#1.
From here the plan was to ride down through Jenolan Caves and back to Oberon, however at the Duckmaloi rd turn off the sign said the road was closed but the caves house was open? Umm yep so how's that supposed to work then? 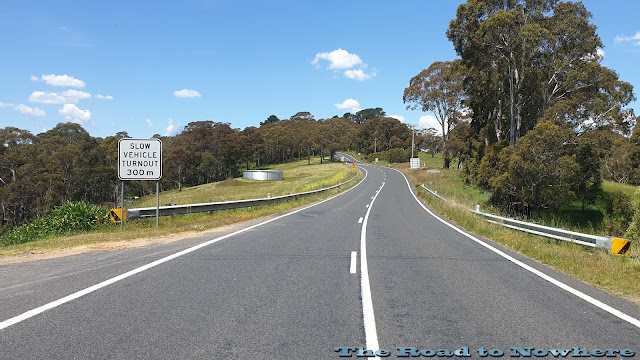 So instead of riding the caves road we turned onto Duckmaloi rd and headed into Oberon for a splash of fuel. We needn't have bothered as I put in 9 litres for 180kms, the R1 is running great after the carby tune. With a 18 Litre tanks thats well over 300kms on a sportsbike.
We set off down through Black Springs and down the twisties into the Abercrombie Gorge to the river at the bottom. It's been 3 years since we'd come this way and they've put in a new bridge and resurfaced the northern side of the gorge. The road condition was great.

A quick stop for a photo of the wind farms on the distant hills. 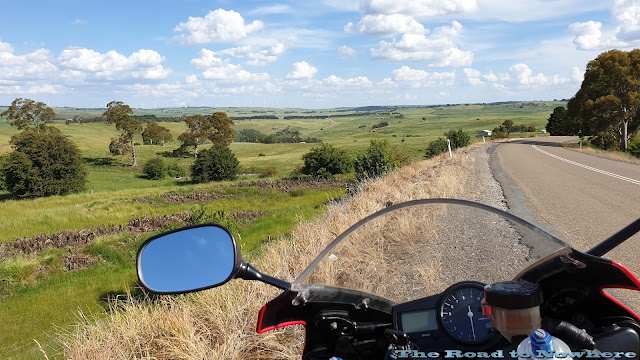 It was only a few short minutes into Taralga where we were staying at the Taralga Hotel for the night. The rooms are a little pricey for pub rooms but Geoff and I shared so we have more beer money.

Main street Taralga on wednesday afternoon. Not much chance of getting run over here.
PUB#2
It was the perfect weather for riding today. A few beers were had and tall stories told of speed and daring, mostly by Geoff.

It was only a short ride into Goulburn to meet Stu and the others and it was good to get the air flowing through my helmet. However being spring here at the moment I get hayfever allergies and my eyes were watering even after I'd taken a tablet. A short breakfast at trappers bakery in Goulburn we headed down towards Tarago to pick up the crew from Callalla Bay. 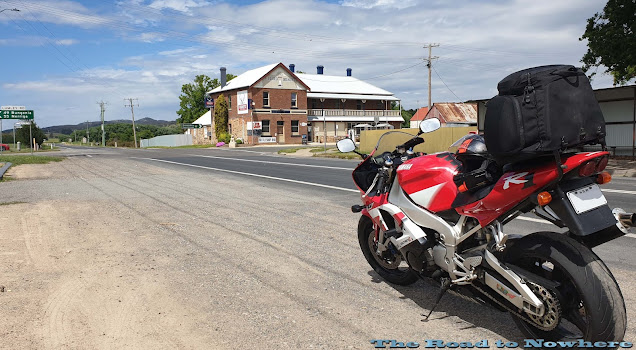 The last 5 kms into Tarago my allergies were getting the best of me, sneezing into my helmet with tears running from my eye's. It was then a mission at the petrol station to get water and take some more drugs. I was so focused I'd forgotten Bretts name and almost Dave's too. Geez got to chill out a bit.
We continued down to Braidwood and then down the Kings Highway for our lunch stop at Nelligan. Except I wasn't hungry so I lazyed on the lounge with a chiko roll and iced coffee.
Riding into Batemans Bay I noticed that they were nearing completion of a new bridge over the Clyde river and it looked huge compared to the old one. About time it got replaced. We are so backwards in Australia about building decent infrastructure. It's about bloody time too.
Riding into Narooma the weather looked like it was about to dump on us, so we fueled up and stopped in at the Pub with the million dollar views for a quick refreshment, there was only 76kms to go today till we arrive at our accommodation. PUB#3
We didn't hang around for to long before we made our way on damp roads down the coast to Bermagui and on into Tathra for the night. I thought I'd stop down at the wharf for a quick photo op whilst the other hit up PUB#4. 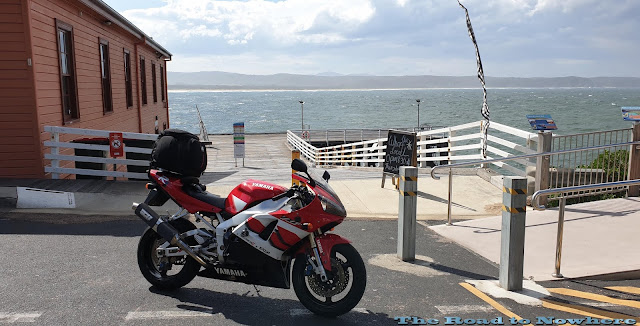 Tathra pub has been refurbished and reopened now after being closed for several years. There's a brewery now on the premise of which we had to participate in the beery goodness. Saving little country town pubs, one town at a time and doing our bit for the economy. Fortunately the pub closed at 9.30pm and kick us out, which was a blessing in disguise as we were ok the next morning.

Heading down to the bakery for breakfast was a good call. After a nice sausage roll and ice coffee we headed over to the beach to take a look, not many people out early today.

A few of the guys needed fuel so we waited patiently whilst they filled up. Groups of 12 or so can take quite some time filling up, it can be just like herding cats most of the time. 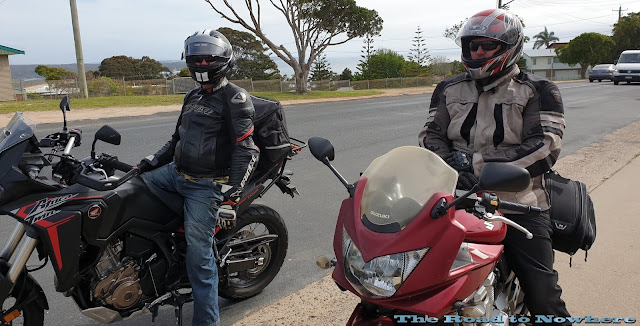 From Tathra we headed towards Bega then followed the highway for a short time to the Candelo turn off. The road into here is being bumped up my all time favourites list. The Mt Darragh section is superb but is tight and can be treacherous, but ever so fun and rewarding when you get it right. With virtually no traffic at all and 45km of twisty goodness what's not to love. 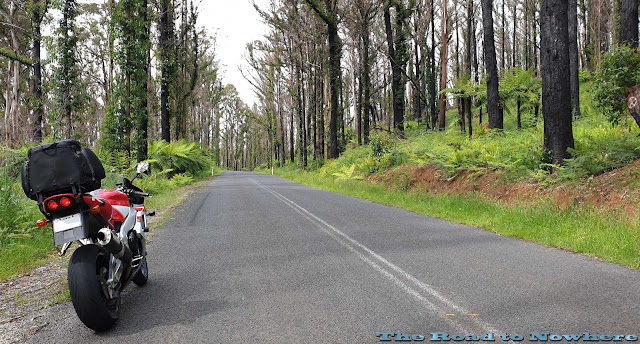 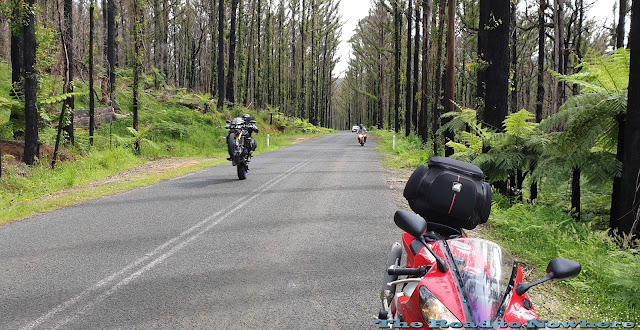 It was interesting to see that last January's bushfire had also ripped through here with the fur like growth evident on all the tree's in this remote area.
We soon had to pull over for some road works. They closed the road because of a tree falling across it, apparently unrelated to the works they were there for. Lucky for us. So we got up to some shenanigans.
It was cleared in about 5 minutes and we got back under way heading into Bombala for fuel.

From Bombala we took the Snowy River Way, a road that I hadn't been on since the early 2000s and that was only about a third of it as it was dirt back in the day. Now its a fast flowing roller coaster ride over Australia's rooftop with views of far off hills and valleys. This is Hayabusa country for sure, but had its fair share of fast sweepers to keep you on your toes.
We stopped for lunch in Jindabyne at the bakery. Maybe we should call this trip the great snowy mountains pub and bakery tour? We also picked up another rider who was a late starter due to work. Craig joined the frivolities. 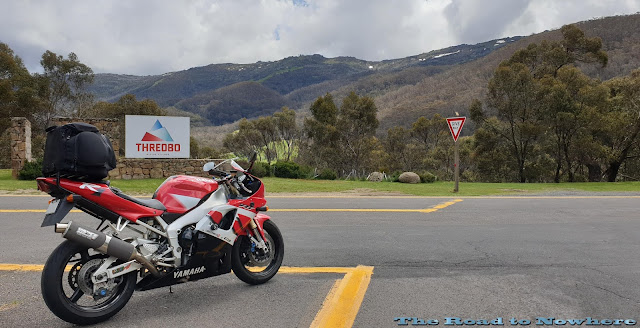 After lunch we headed up and over thredbo. It was interesting to still see some snow drifts up top. As we crested Dead Horse Gap and headed down the winding slopes we noticed the bushfires had ravished these beautiful mountains and now they gave an eerie ominous look. 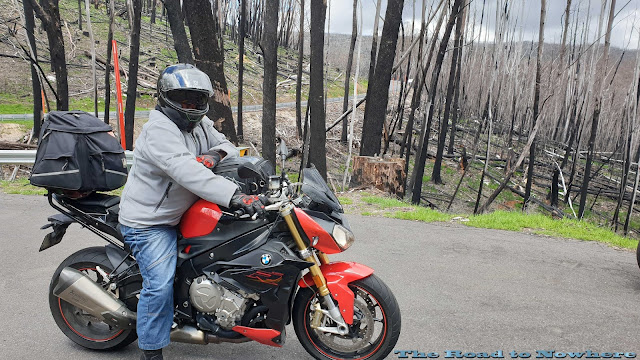 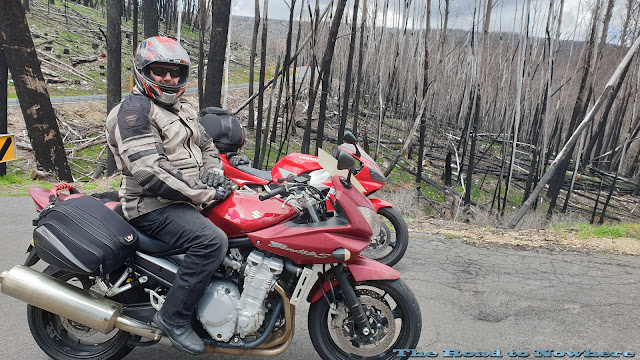 A few kilometers down the hill I almost came to grief with a huge front end slide followed by a rear end slide on a fresh patch of gravel that couldn't be seen. A few corners later I caught up to Stu riding quite slowly. He obviously hit the same patch and also had filled his trousers like I had. That was too close.

We stopped to regroup just after the river at Geehi picnic area. Jas pulled up on the Bandit, he'd also filled his trousers, but not for the same reason. His front guard got caught on the radiator guard and was on full stop on the suspension and almost ran off the road in the process. Its a long way down from up there is all I can say. Very lucky, but it broke the front guard. 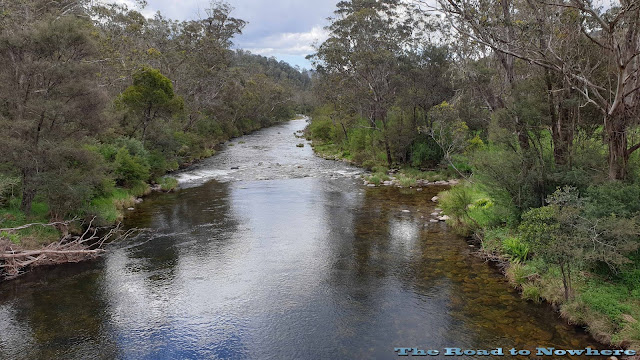 It wasn't far from here till we reached Khancoban, where surprise, surprise we visited the pub for a quick refreshment before the final stint into Tumbarumba for the night. PUB#5.
Interesting that we bumped into one of Scotty's mates who incidentally was out on a group ride of his own. Sometimes the world really is a small place.

It was only a quick stop before we set off for Tumbarumba and PUB#6 for tonight's stay. Another fantastic day on Australia's rooftop.
Posted by Chiller at Friday, November 27, 2020