What happens when you have two motorcyclists with a weekday off work? Being the sad bored individuals that we are here at The Road to Nowhere blog, I thought we should help out the homeless and orphaned children, but bushpig said "Fuck that, bikes need be ridden and thrashed to within an inch of their lives". Who am I to argue with that? And what better way of doing that than having a comparo between the first ever R1, the 98 R1 and in my opinion best R1 invented and ride it up against 17 years of evolution in the all new 2015 R1. Would either of these 2 bikes ever be the same again after this high speed, car intimidating, granny scaring, wheel standing balls out test ride? 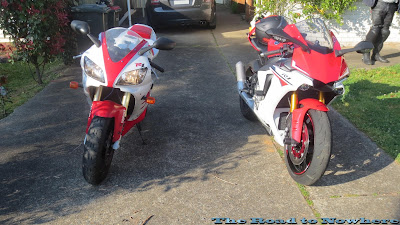 First up was a walk around both bikes to look at the differences. Standing behind both bikes you can see that the old R1 is lower in the tail section and the seat is lower and the front screen is lower. The 15 R1 has a tall screen which I can attest to that it makes it easy to tuck in behind when speeds rise. You can also see how compact the engine has become in the latest generation engine, its much narrower. The 15 R1 is so much more compact in just about every area. 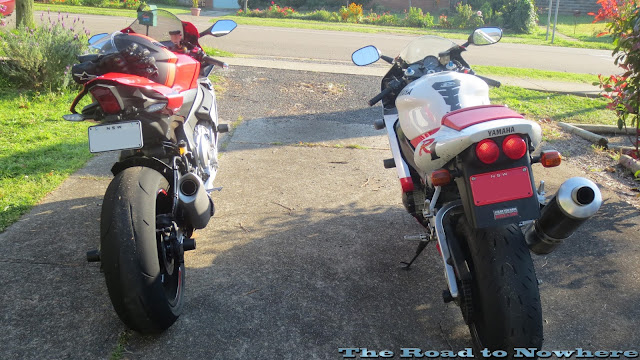 Both bikes have standard exhaust systems fitted and are fairly quiet but both bikes have distinctively different engine/exhaust notes. This is mainly due to the 15 R1's cross plane firing order. I love the sound of the cross plane engine, it sounds much like a V twin and when you fit a aftermarket pipe the cross plane  sounds like the motogp Yamaha M1. Bring that shit on!

The new R1 had the same design intent as the original bike. A no compromise light weight, high power race bike for the road. Over time after the first couple of models the R1 developed a under seat exhaust system which added weight and added a high centre of gravity and basically the bike got heavier and became more of a comfortable road bike than the race bike it was born to be. The under seat exhausts also fried its riders from the heat in summer from all reports I've read and heard about. The new R1 has gone back to the original spec with a low down pipe on the side. I prefer that look and you don't get roasted. 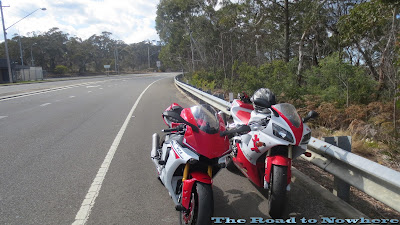 A quick spin up through the Blue Mountains along the Bells Line of Road saw us testing out the bikes handling along some of the bumpy surfaces that were pitched at us. Both bikes handling these with ease. It was good to see that some of the twisty sections of the Bell's line have now had long stretches of hot mix tarmac layed out like a magical carpet ride to knee down heaven.

Crossing from the Bells line we headed through Mt Victoria which has now become speed camera central with average speed cameras at the top and bottom of the hill. We were soon turning off and headed out towards Oberon. 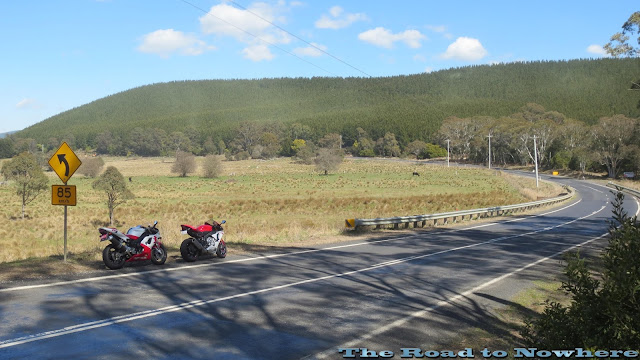 We stopped along this section to swap bikes. Riding both bikes back to back showed up a couple of things right away. The old R1 feels like you sit down in the bike more than the new R1 which feels like you sit on top of with an ultra hard seat. The old R1 seat is so comfortable in direct comparison. It's funny I used to think you sat on the old R1, but not now. The new R1's suspension is a lot firmer than the old bikes which soak up the bumps where the new bike feels a lot harder. I've backed off everything by 5 clicks on all settings, it's pretty good where it is maybe one more click softer will help out for road riding. Both bikes felt fairly similar to ride in both ride position and handling however it was clearly evident that the new bike felt so much more refined and much easier to ride. The new bike turns into the bends effortlessly but that's not to say the old bike wouldn't turn into the corners it just required a little more effort but was still easy and enjoyable. 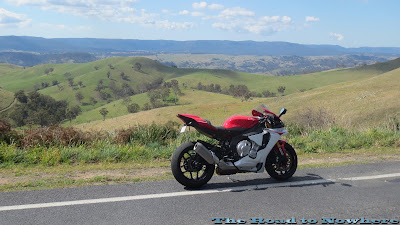 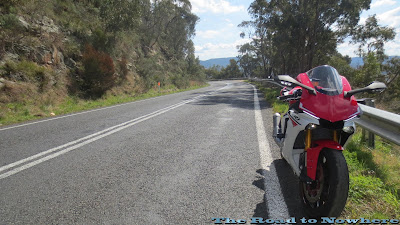 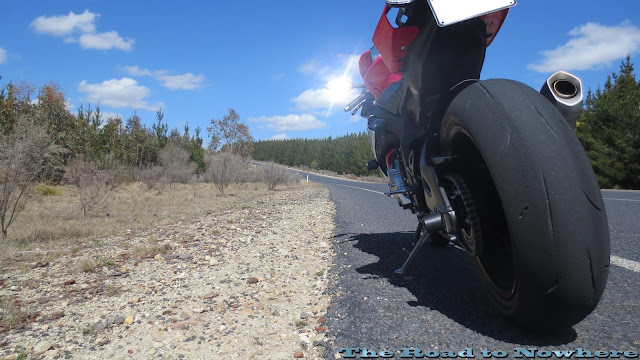 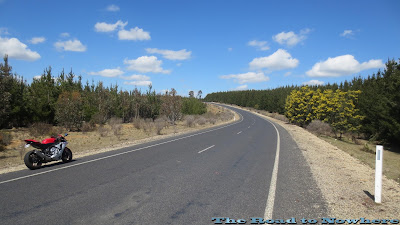 Shooters Hill road is always a bit of a must when out this way and it is an adrenaline filled roller coaster ride. Some long deserted straights mixed in with sweeping bends up and down through the pine forested hills. This is sports bike nirvana and we have the weapons to slay the beast.

Stopping to compare bikes and soak up this fantastic weather and location bushpig said "This new R1 motor is fucken powerful, its got loads of grunt everywhere, you could get yourself into trouble quickly on this thing" The old bike had 150HP and weighed in at about 200kg but the new one is a 200HP monster weighing in at 199kg wet. Around 9-10K rpm the new R1 engine just surges, a bit like a power band on an old two stroke it just takes off even harder. I've been running the bike in C mode with power 2 setting which seems to be the smoothest for riding on the road. Its absolutely mental in A mode in power 1. Save that for the track as it's too on/off for the road. C mode of the new bike is about the closest match for the smoothness of the old R1 carbys.

The brakes on the old R1 are also much more responsive in feel coming on strong very quickly, the new R1 brakes seem to be not there until you give them a real good squeeze but once working they seem pretty powerful pulling you up quickly, they just lack that initial bite.

I didn't bring the Gopro today but Bushpig had brought his Sony action cam and he got a little bit of footage. However most of the videos didn't turn out as the camera kept turning off or maybe it was user incompetence, whichever this is all the video we got. Maybe we will have to do a part 2 of this.... 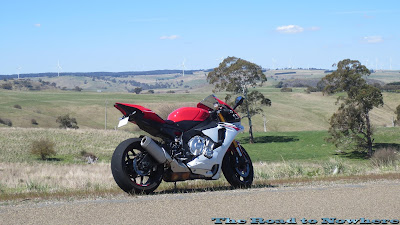 It seemingly didn't take long at all to get to our lunch destination at the fabulous Taralga Hotel. These guys have the best counter lunches at very reasonable prices especially seeing as this place is miles from anywhere. All washed down over a nice ale. There is premium unleaded fuel available in Taralga as well just across from the pub at the local Agriculture supplies shop. The petrol station across from the pub doesn't have petrol and looks like its closed. I put 3 litres extra in just in case as I'm still a little unsure as to the fuel distance plus how we've been riding them today. The old bike is much better on fuel than the new bike. 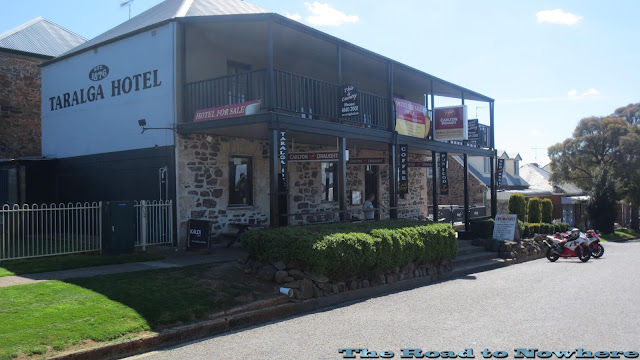 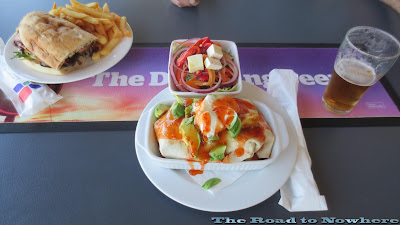 After that excellent lunch I rode the 98 R1 back to Shooters Hill and I tried to ride in the same manner as I'd ridden the new R1. I was really surprised at how easy it was to swap between these 2 machines and not have any difficulty in riding them. I think I was going just as fast on the old bike as the new one. The old bike really is a great machine. It handles our bumpy roads with ease. You can get a bit nervous on the new bike at speed hitting some big bumps as you tend to bounce off them. The suspension is good but it is hard. 1 more tweak maybe. 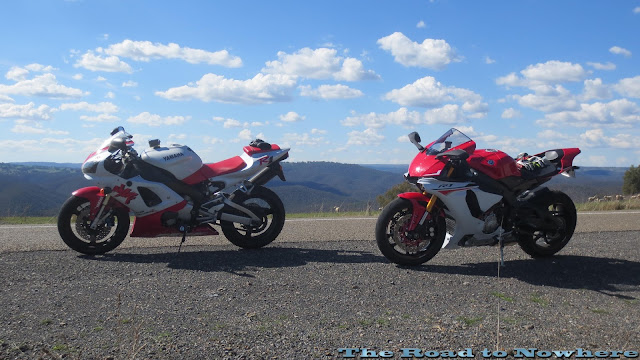 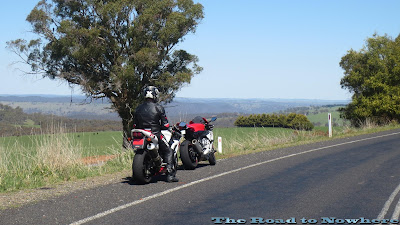 Interestingly enough we managed to do several top gear roll ons from 100kmh. I was surprised here by the old R1 walking away from the new bike every time until about 150kmh where the new bike started to open up and make some real power. In fairness the old R1 has one tooth less on the front sprocket and with a shorter top gear. The new R1 at that speed is sitting at 4000rpm right in its dead spot and it's taller gearing doesn't help here. I think a 4 or 5th gear roll on would have been completely different. Top gear on the new bike is more like an over drive gear. Both myself an Bushpig found it was much more responsive and fun riding in 5th as you had instant grunt. 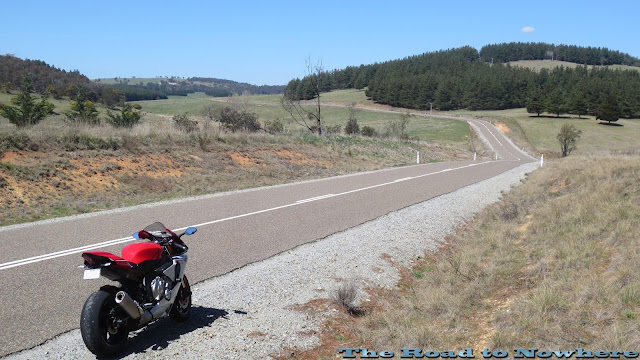 I wanted to show Bushpig the other roller coaster ride which is a short 8km stretch off shooters hill road which is a forestry road and back entrance into Oberon correctional centre. This piece of road is some of the best anywhere just not at the speed limit. Both bikes were humming along onsong on this little bit. We both had smiles a mile wide. 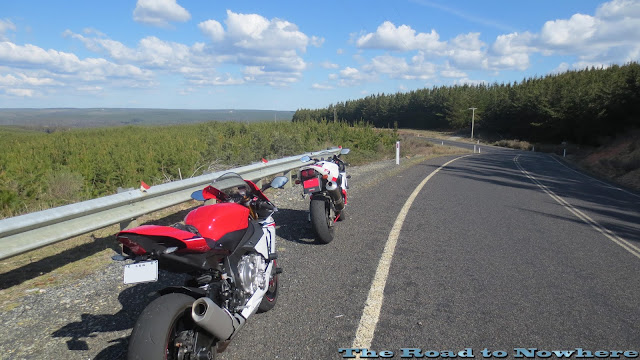 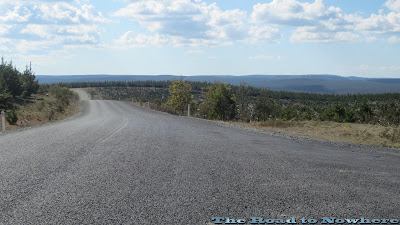 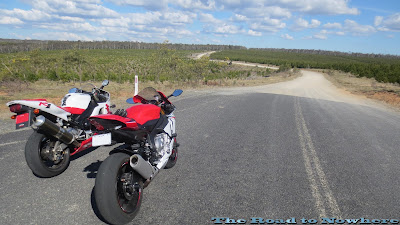 The picture above was the end of the fun bit, but being a dead end meant we had to ride that last bit again, I thought to myself "I wonder what the poor people are doing".


This back to back comparo really showed me how good the old R1 really is. I threw everything at it that I threw at the new bike on the road and it was still there keeping up, with the one exception the top speed. The new bike has a big top end. The new bike is so much more refined than the old bike and makes everything seem much easier and more confidence inspiring to ride. You could get yourself into a lot of trouble quite easily and quickly on this new bike but it is oh so much fun. It was also interesting to note that on the trip back to Oberon that the fuel consumption of the new R1 wasn't that much worse than the old one. Bushpig put in 16.2 litres and I used 16.8 litres for around 230kms. Don't just take my word for it here are some views from Bushpig.

"second thoughts!?....put it this way I didn't want to hand the hoss s rocket back but he insisted......its a 30 grand machine for a good deal less.....the engines power is big ,deceptively smooth and loves to rev and the suspenders top notch...my old r1 still goes like the clappers but these new ones are in a class of their own....now to get one of those invisibility cloaks to keep the gestapo at bay". - Bushpig