First ride out and something unexpected 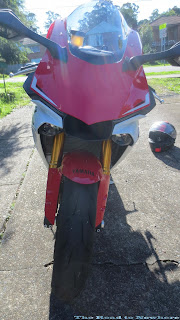 Well here it is at last, finally revealed in all its glory. Yes I know I teased some of you relentlessly with the last couple of posts, especially with that dodgy night photo. Yes I am a bastard. I was almost bursting to tell you what it was but I thought I'd have a bit of fun with it. Besides it's not everyday I buy a new bike. The suspense was getting to even me by the end of it. I guarantee that you guys will get a giggle out of this one.

Some of you guessed it, my new stead is the 2015 Yamaha R1, packed with all sorts of electronic wizardry. This bike was set up and developed in conjunction with Valentino Rossi so it can't be all bad. I was considering the Ducati Panigale but no dice.

I'd wondered that nobody picked up on the fact a couple of weeks ago I visited the local dealer to look at the bike. Well it was a bit more than a look as I laid down some cold hard cash and this little beauty is now mine.

Well what's it like I hear you say? Calm down, here a few first impressions from the little run that Bushpig and I did on the day I picked it up. 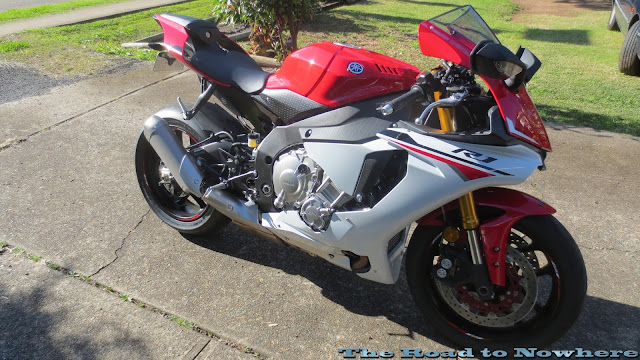 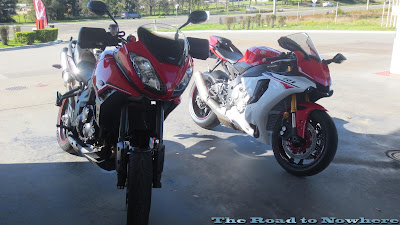 After listening to the tech at the dealer explain all the controls and me taking in none of it as I couldn't wait to jump on board and go for a spin, what was all that guff he said about traction control mode button. Ah who cares I'll check that out later, now is time just for riding.

I arrived at Bushpigs and he was eyeing off my new stead we headed off on our way to have lunch at Wisemans Ferry at the pub. Bushpig stopped for fuel and asked if I wanted a top up. Nah its full I said as I checked it before we left his house, as we then headed off. Bushpig changed his mind and said we should head up the Putty Rd instead. I wasn't going to argue with that, and that was a longer ride so even more fun. 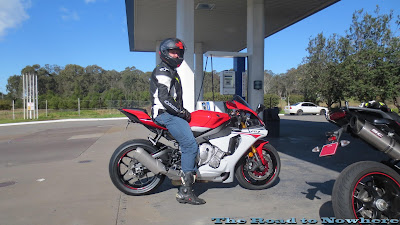 Some first impressions - The suspension is a bit stiff, but that's what you get for a race machine, I'll have to do a bit of fiddling and soften it up a bit for the road as it's probably set up for the track. I haven't even checked sag or any of that yet. Also the seat has a bit less padding than my old R1. The seating position seemed to be fairly neutral and much like my old bike, it didn't feel like I had any more weight on the bars or anything so all good there.

The engine - oh GOD, that crossplane crank engine noise is glorious. It sounds much like a V-twin but its not it's an in line four cylinder. The engine is probably the biggest difference I noticed right away. With the fuel injection I found it a bit hard to ride as my throttle control seemed to be either on or off. It was a lot harder to control than my old carby model R1 which was a lot more linear in response. Sometimes it felt like I'd rolled off the throttle but the throttle was still on, rolling into some bends, but the handling was so sweat you could just turn it in no problem. The steering was so sharp, sometimes to the point of me over steering it. Wow it's quick. 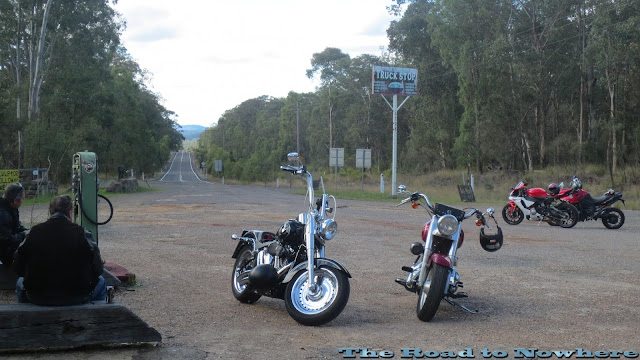 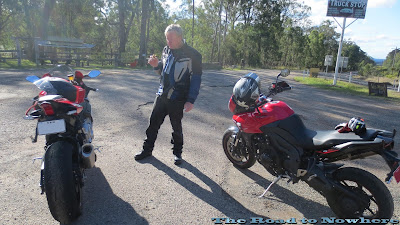 We had stopped at the old halfway house for a late lunch about 1:30pm. A Bacon & Egg roll went down a treat whilst we basked in the warm winter sun and looked over the bike. I have already commenced the farkling with a tail tidy going on before even leaving the dealership, I've got some oggy knobs coming and radiator guards. What to get next? I'm thinking a single seat cowl then the exhaust system.

It was cool out today around 11°C and Bushpig said we'd better get going back. I handed him the keys as I rode his trumpet back whilst he tried out the R1. I saw him disappearing into the distance at a great rate of knots for a while, not sure that was quite legal but who am I to judge others. About 10 minutes later he'd pulled over and hopped off we swapped bikes back again.He mentioned the suspension was too hard for him too. Swapping back to the R1 we set off again. After a while I noticed the fuel light was on, no problem we are coming up to Colo Heights soon where there's a petrol station.

Cough, cough...... went that sweet sounding engine then disquieting coasting noises......F#ck I'd run out of gas on the first ride out as I saw Bushpig disappearing into the distance. He soon came back and asked whats up. I told him and we both looked at each other and pissed ourselves laughing at the hilarity of the situation. Me not topping the bike up when I had the chance and him doing break neck speed whilst the fuel light was on.

So this is where I'd coasted to a stop on one of the worlds fastest sport bikes going no where in a hurry. Ah well, photo Op time is all I could do as I chuckled to myself again. The first time I'd run out of fuel on the bike in 20 years. All I could do was laugh. 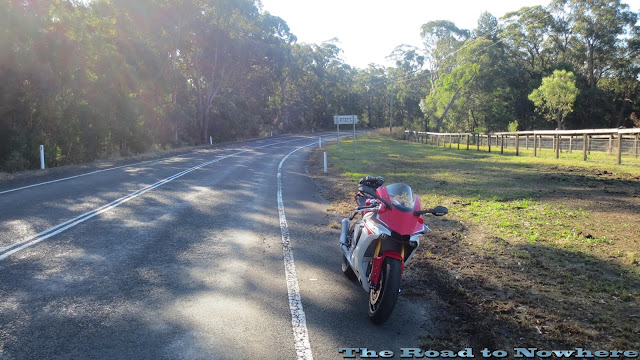 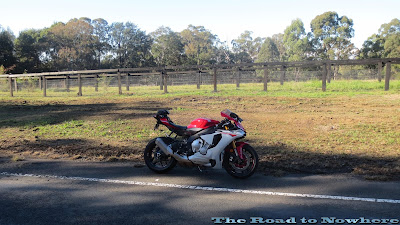 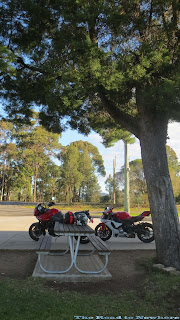 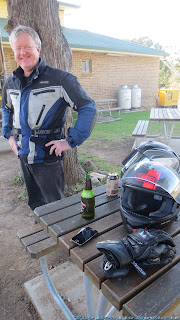 Bushpig returned about 15 minutes later with a 5 litre can of fuel, I'd run out 3 kms short of the service station. Topping up didn't take long and we were soon filling up at the bowser in Colo Heights. I put 17 litres in, I wonder if it was completely full from the shop otherwise the fuel consumption on this thing is a bit heavier than my old R1. It was showing 211km on the odo. I'll have to wait and see after putting a couple of tanks through to make sure how much I'll get. A couple more bikes pulled in and we chatted with them for a bit over a cold beverage. Before long we had hit the road for home. Another good day out, luckily I hadn't run out of gas 30 or 40 kms up the road is all I can say.

I'm loving the handling and the engine on this bike. Oh that engine is glorious - so much power it just builds and builds, it grunts out of corners with plenty of torque. So much more than my old R1 and that wicked engine sound. I think a pipe will definitely be on the shopping list at some stage. I'll touch on the electronics in an upcoming post as I've not yet had a chance to play around with it. One thing is clear this bike is MotoGP for the road, make no mistake about that. It's seriously fast with handling to match. There is no mistaking its track focus. My old R1 feels like a sports tourer compared to this. Now to turn off that Lift control to let that front wheel fly.... 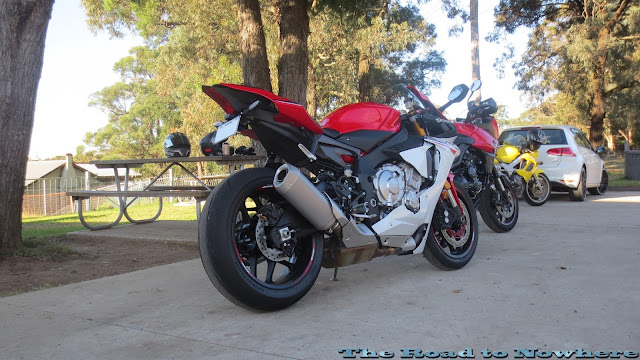