DAY 1
The start of our annual snowy mountains ride and before we'd even left there was an incident. Wayne's Ducati was leaking fuel from under the tank. Turns out it couldn't be fixed in time and he had to pull out before a wheel was turned in anger. Bushpig and I were to meet up with the others at the servo at Richmond. At which point it just started to bucket down with rain. What a great way to start the trip, not! 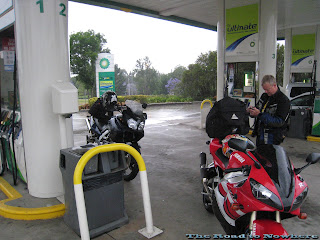 Our trip out over the Bells Line across the Blue mountains was in the teaming rain with one or two heavy spots. The trip was slightly shortened here due to the weather and we turned down Mt Victoria and headed straight out to Oberon. Unfortunately for us the local council decided to rip up the road in several sections and the rain had turned it into a muddy clay mess. I really felt for Lost Boy here on his brand new BMW S1000RR with only 1700kms on it. It'll never be the same now.

After a breaky stop in Oberon we continued on and lucky for us it had stopped raining and had started to dry up. This made for a much enjoyable run down to the Abercrombie River. It was funny to hear the other guys talking of a brown trouser moment when they had crested the hill on a right hander only to find only half a road where before there was 2 lanes, exactly the same spot that I did 11 months previous on this trip. 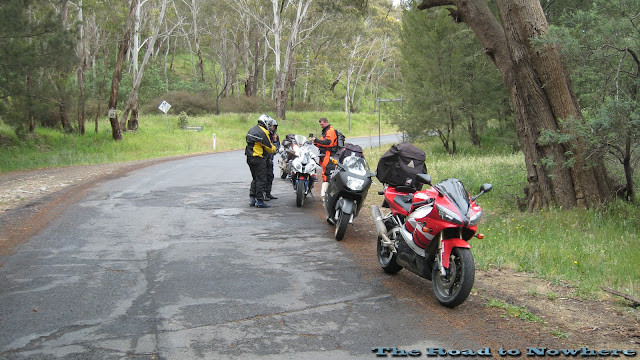 Lost Boy giving the thumbs up despite the earlier rain. This piece of road is quite a bit of fun. 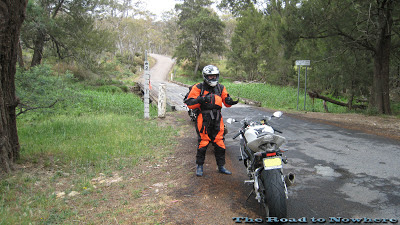 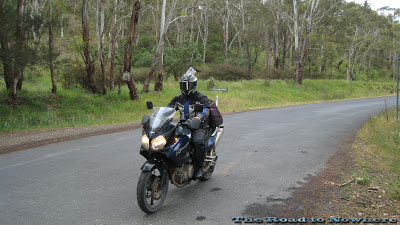 We had pressed on from here and rode down through Taralga and onto Goulburn. We stopped here and picked up a couple more members on the ride and for coffee. From here we continued onto Braidwood and stopped in at the bakery for a pie/sausage roll. We picked up another rider here(Jeremy) before heading down Clyde Mountain to Batemans bay. Usually this is a fantastic biking road that I was looking forward to getting some pictures of or a gopro video but the rain gods came down on us with a furious vengeance, at which point I could hardly see more than about 2 cars lengths in front due to the rain and fog. This didn't stop Jeremy on his PR3's from disappearing into the mist.

We stopped in the Bay but the rest of the crew were still an hour behind so we didn't hang around as by now the Pub at Central Tilba was now beckoning. We headed straight down the coast which it was raining on and off and arrived at the Dromedary. We'd be staying at the farm a few minutes away at this amazing little cottage with fantastic views of the surrounding country side. We had undercover parking here to. 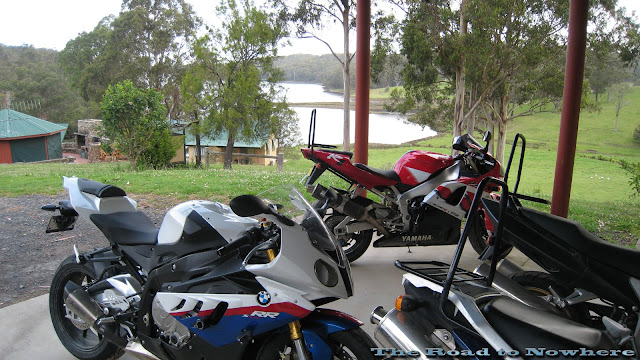 The photo above has Lost Boys BMW S1000RR. Mate what a spectacular looking bike and at some point in this weekend I would actually get to have a test ride.
This is the road out of Central Tilba, the landscape around here is very beautiful with plenty of winding roads to be found. We had a quick look around town which is all it took and then was back to the pub for beers and diner. 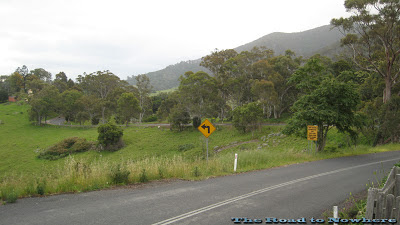 The Dromedary is a very old pub and one of the smallest pubs I've ever seen. I don't think you could have even swung the proverbial cat in there. Here's bushpig standing out the front in his element and even despite his best effort couldn't drink the place dry. 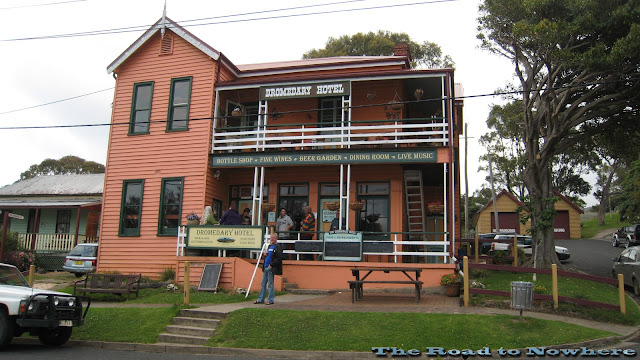 The boys arrive in Tilba and Stacker tries to run down bushpig.


There wasn't that many photos taken today as it was raining quite a bit and I'd also found it hard to stop for photo's when group riding, I end up getting to far behind and I also don't want to inconvenience the others and make them wait for me.