Who would have thought that on one of Sydney's best bits of winding road at the top end of the Putty Rd that my R1 would have felt so sluggish and docile to ride in the twisties, a place where I'd normally throw caution to the wind and let rip i found myself slowly rolling into the bends taking care to not upset the suspension to much because if i hit any bumps on entry the bike would be wallowing and squirming around beneath me. Why was my bike feeling so terrible to ride on such a fantastic road.....

Day 1
It's Saturday morning and five of us meet at the BP servo at North Richmond for the ride out across the Bells Line. Riding up Bell Bird Hill at Kurrajong we get stuck behind a Ute and every corner it rounds water pours out of its bumper onto the road. This is a good reminder to not go to fast here, this piece of road has a high level of traffic which spills oil and water and crap all over this bit of road.

Its a pretty uneventful ride across the bells line and i didn't stop to take any photos but you can see some pics from my last ride out a couple of weeks ago here. We had a short stop in Lithgow and continued on down towards Jenolan Caves.
We head out down the Great Western Hwy and turn off on the Jenolan Caves road. The start of this road also has some brilliant bends as it winds it way down the to sudden 8km drop down to the caves. 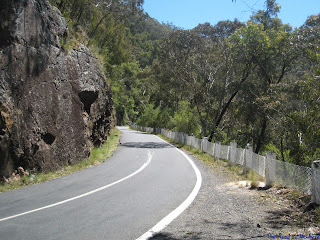 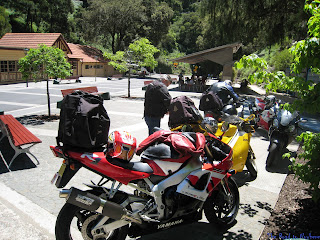 After a quick coffee break at the visitors centre it was time to head off again up through Oberon for lunch. No pub for lunch today just a quick bite at one of the local cafes and then onto bathurst for fuel and a couple of laps of Mt Panorama.

After living out this way for years i had ridden around the Mount several times before on all the bikes i have owned. The race track during the day is a 60kmh zone so there was to be no heroics of speed and daring.....well maybe just a little, after 3 laps at the legal limit i couldn't help myself coming down the esses and just had to give it a little. But still safely and on my side of the road. Just enough to get the adrenaline kicking in. 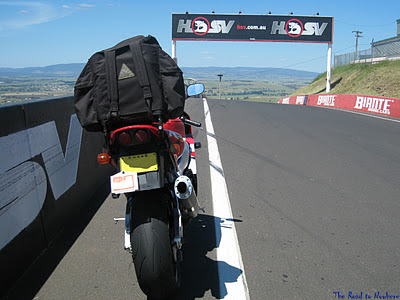 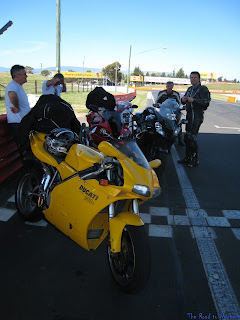 It all ended under the bridge after a few laps otherwise we may have been tempted to do something stupid. The road surface on the track is very good and i attempted a little knee down action on several corners. Although i failed miserably cause i wasn't (a) hanging off enough and (b) going fast enough and (c) out of shape.

After leaving Bathurst it was onto Sofala and to the pub for beers and stay for the night. A good night was had by all, I'll tell you the locals around here can really drink and then some.

DAY 2
It was a slow start to the day after a fairly decent effort by me and Geoff to try and drink the bar dry but to no avail, maybe on the next attempt we'll do it.
We left Sofala and headed for our breakfast stop at Rylstone. After a coffee and bacon and egg sandwich it was time to head of again. There were quite a few bikes in town this morning. My speedo was reading 49,994. So when we left i told the guys i would stop for a photo and that i would catch up.

So here i am 6kms out of Rylstone with the magic numbers on the dial. 50,000kms on my R1 woo hoo. Who says you can't tour on a sports bike? 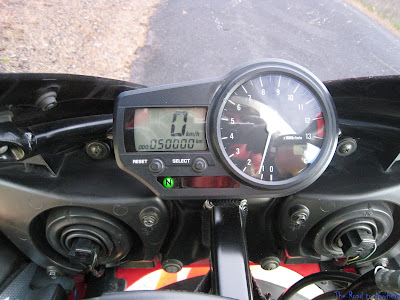 After this short stop for 2 photo's the others were long gone. Time to catch back up again. This was the first time i had ridden on this road and what an absolute beauty it is to ride. I must say that this road flows better from North to South due to the the very twisty mountain sections that were all down hill for me. Its hard work riding fast down hill, much easier to ride fast up hill i think. 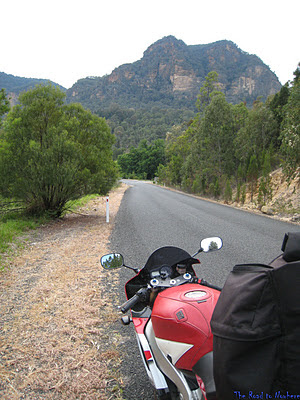 The photo above is very deceptive as it looks completely flat, but it is actually looking down a step hill with the mountain looming up very high in front at the end of a very winding section. After this stop i was getting even further behind. Time to step up the pace.

I caught up to the rest of the group just as we came into Bylong itself, which is basically just a general store and that's about it. The road along here is very good, nice surface with long views ahead. 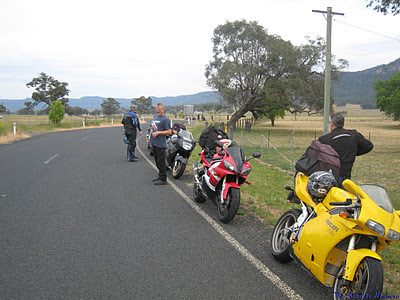 It was getting very hot today as well in the low 30°Cs. I am so glad that i brought my camel back so that i could stay hydrated. It was a godsend to have it today and it got filled twice. After leaving Bylong the road wound its way through the hills, there is another tight twisting bit of road here that last for a few kms. We came along a sharp down hill left hander with 2 guys sitting on the guard rail and one very second hand looking Aprilla RSV wedged under the armco barrier. They were OK so we kept on riding as a tow truck was on the way.

We then had a quick stop in Denman for a drink and then the plan was to head to Bulga for fuel then back down the Putty Rd and home.

At this point things started to go a little pear shaped due to a number of reasons. We had a kraut out front who didn't know where he was going and everyone following. The turning point was on the crest of a hill with only a small sign.

One thing lead to another with lead rider braking heavily to stop to make the turn. I was sitting back in fourth spot and all of a sudden saw brake lights and bikes looming large in front. Shit! I hit the brakes and try to avoid running up the back of geoffs R1. Whilst doing this i look in the mirror to see a very close and very sideways ducati with rider starting to leave the bike. SHIT!

Needless to say this brought an abrupt halt to the days proceedings. The duke was unridable due to a broken clip on and footpeg and brake lever. A tow truck was called and removed the offending ducati. 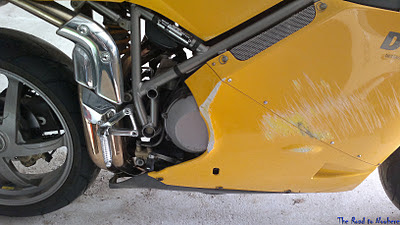 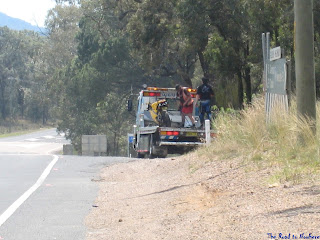 Mr Ducati(name changed to protect the innocent, but we all know who you are lol) had a quick trip to singleton Hospital and luckily everything checked out ok. No broken bones just some nasty bruising.


Its also good to see that his draggin jeans came through without a scrape or mark on them. I think i will go buy a pair of those. Excellent product.

Now back to the very start of this tale. Why was my R1 handling so poorly on the Putty.
Well Mr Ducati was on the back with all my luggage and all his luggage in my bag and with the both of us on the bike, the old R1 had just about had enough. It was overloaded with weight and was protesting at me. But it managed to get us home.
Posted by Steve at Sunday, November 13, 2011