I was invited along on a ride on one of Australia's best riding roads, if not "the" best riding road the Oxley Highway in Northern NSW. Most aussie bike riders know of this road, it's probably our equivalent to the Tail of the Dragon in the USA. The road itself starts from the coastal town of Port Macquarie and snakes it way up through the great dividing range and out to Tamworth and beyond. But the best part for us bikers is the bit from Long Flat up to Gingers Creek and beyond that.  This road has 54kms with over 300 bends which is an Aussie motorcycling mecha. When I got the invite I was like sign me up and when can we go.


This was to be a 3 day affair with us meeting up at McGraths Hill maccas. I'd met up with the Slomax and we rode out to Riverstone as I had to stop and vote in our local council elections before leaving otherwise they would have hit me up with a fine for non voting and I'd rather keep the money in my pocket than give it to those bastards. Stopping early we ordered a coffee waiting for the polling booth to open, taking the first sip of coffee and it was like it had been made in the fires of Mt Doom. I think i'd burnt the taste buds on my tongue. Struth it was hot, it took 10 minutes to cool down to drink it.

Continuing on we arrived at our meeting point to find Doug and Dave waiting for us and no sign of Bushpig. About 15 minutes later he arrived. He looked like he'd gone six rounds with Mike Tyson blood shot eyes and all. We got it out of him he'd had a big night out at the pub the night before doing karaoke.

The ride took us up the Putty Road to Singleton, being a nice sunny day the blast up here through the 10 mile of twisties was fantastic and I was having a blast. I pulled over at the end for a little boys stop and let everyone catch back up and soon we were under way and on into Singleton for a refuel. 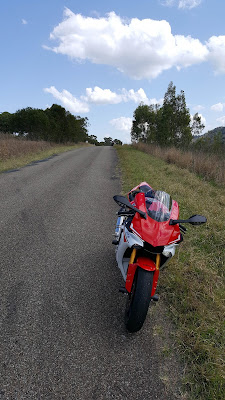 After Singleton we headed out towards Dungog. This would be a fantastic little road if it wasn't so god damn rough. The bit from Gresford to Dungog and across to Stroud is an awesome area but the road is so rough it's no longer any fun. I'd say it borders on being dangerous. Some sections of this road you can no longer actually see the road anymore as it is just a series of patches upon patches until there is not road anymore just patches.  Note to Dungog council - Fix your fucking roads you pissed me off you bastards. I'll never spend a cent in your shithole of a town until these roads are fixed that's how pissed I am. I had to check I still had all my teeth when we stopped in Gloucester.

There was one sphincter puckering moment when the Slomax went to overtake only to find that there was someone coming the other way, I hope he brought a spare pair of undies because he sure would have needed them. Just goes to show you can never be too careful, and he is usually a super careful rider.


After a lunch stop in Gloucester we continued on the Buckets way towards the coast foregoing the usually Thunderbolts way. I hadn't ridden across this road in about 15 years or more and it was quite a good bit of road winding up through the hills as we turned off up yet even more back roads to come into the back of Taree which is Troy Bayliss country. No wonder he was so fast with all of these roads on his doorstep but a hefty dollop of talent thrown in.

We decided to stop by Harrington which was on the coast for a quick beer on the water front before we headed to our digs for the night at the Coopernook pub which is just off the highway.


Rick turned up about 30 minutes after we got there, he'd ridden down from Brisbane to meet us and had to contend with rain most of the way. Better him than us I thought! 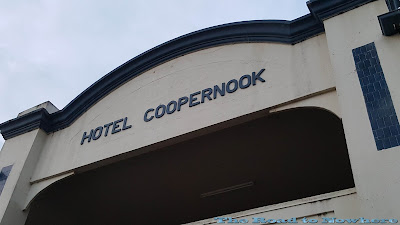 The Coopernook pub was a good little find just off the main highway, there was no noise from the highway and it was only $35 per person per room, with continental breakfast included. It was meant to rain over night so we put the bikes in under the front verandah for the night but it didn't do much more than spot a bit.  We sat out the front enjoying the warm weather talking shit and drinking some fine ales.

After breakfast we had a bit of a late start but that was fine by me as we didn't have a lot of kilometers to do today. We did a short section of the Pacific hwy to get us to Wauchope were we stopped for a coffee across from timbertown. There were a few bikes coming passed going up the mountain.

On the way up there was a heavy downpour for about 5 minutes just as we got to the first set of twisties. I could see blue skies on the other side of the cloud so we pressed on and the sun came out again but now the roads were wet. Fantastic, twisty wet roads..... 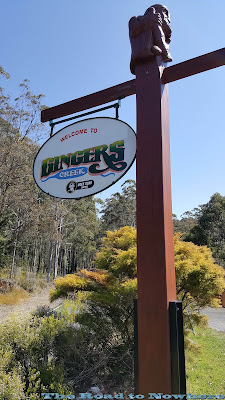 We arrived at Gingers Creek store just on lunch time and we were all famished. I'd ordered the bacon & egg roll on Doug's recommendation. Good call doug it was very good. Although the hamburgers that came out looked even better. Rick had trouble getting his mouth around it, it was that big no joke.

Doug decided he'd take a break and read his kindle whilst the rest of us left our gear at the store and headed back down the mountain. It was staring to dry up now with only a few damp patches here and there.

A lot of this was so tight and twisty that on the R1 I was riding most of it in first gear which allowed me to concentrate on corner speed and lines without having to factor in gear changes. There were only a few places I needed to change into 2nd or third but they were few and far between. This road is mostly 35 or 45kmh bends.


Coming around the Mt Seaview bend I could see Dave and Rick on the side of the road, I slowed to pull over but they waved me past, I hadn't seen Bushpig or Slomax so I pressed on.


As I came around a left hander what did I see on the side of the road but these two bums sitting there enjoying the sun shine. Taking my helmet and gloves off my hands were shaking with adrenaline, they both laughed at me as if I was some feeble old guy with parkinson's. 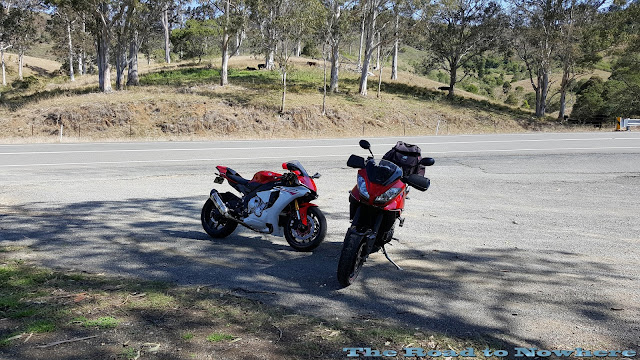 Heading back up to Gingers Creek the road had dried out and I was getting my eye in now after two passes. By the time I got to the top I was starting to get a bit tired and thirsty after 80kms of hard riding on this winding road. Pulling back into Gingers Creek there were now a lot of bikes here in the carpark. I thought I better top up the tank as I probably wouldn't make it to Walcha. I was right I would have run out of fuel 30km out of town, this R1 is thirstier than an alcoholic on payday. 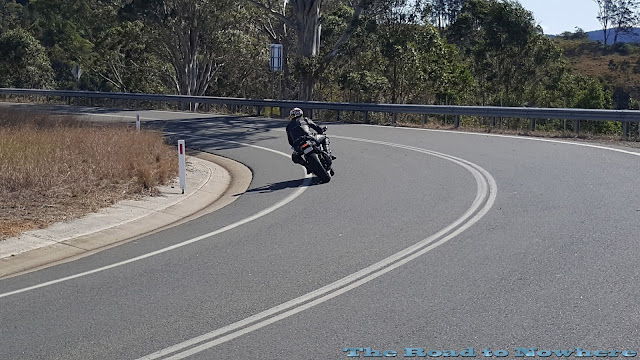 Rick, Dave and I decided on a quick stop in to have a look at Aspley falls which is just off the side of the road. With all the rain lately the falls were roaring today. Time for a quick selfie. 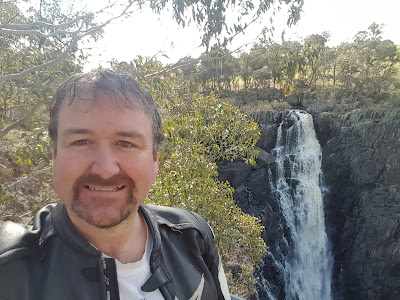 It wasn't long before we got into Walcha for a fuel top up, a quick beer before the quick trip across to Uralla and the Top pub which was our stay for tonight.

Bushpig and I went for a walk around Uralla early to see what was open. Being a small country town and a Sunday there was sweet FA open so we headed back to see if the others were up yet. We did make one vitally important discovery on our walk but damn it they were closed. I had to stop Bushpig from licking the windows. Maybe next time then.


After a big cooked breakfast at the cafe across the road from the Top Pub we got under way again heading down the New England towards Tamworth. We said our farewells to Rick as he was headed back to Brisbane as we went south. This was just boring slab work until we got to the turn off on the out skirts of Tamworth.


Doug has shown us a new route to go down to avoid the crap top section of the Thunderbolts way. It starts from the top of Tamworth and heads out towards Nundle running in between some large hills and along beside a creek. The roads flows well through beautiful countryside here before suddenly coming up a tight twisting section called Port Stephens cutting quickly ascending the mountain side until it comes out on top of the plateau. It was rough and tight and there were plenty of picture opportunities but I was having to much fun to stop and take any photos. 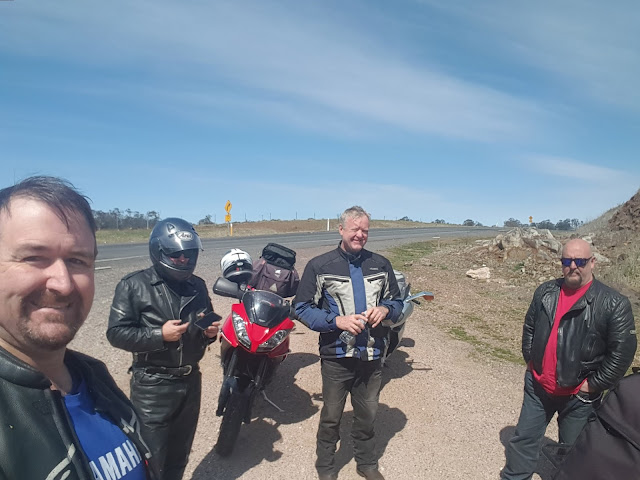 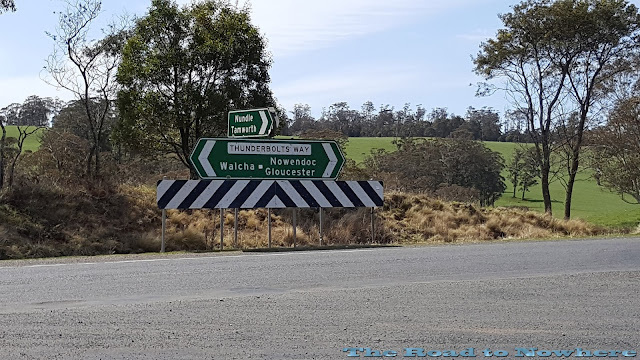 It wasn't long before we'd popped out back onto Thunderbolts way near to Nowendoc. A few minutes after we stopped a Ducati 1198 and a BMW came flying up, they were starting to look for fuel so they headed for Nowendoc. 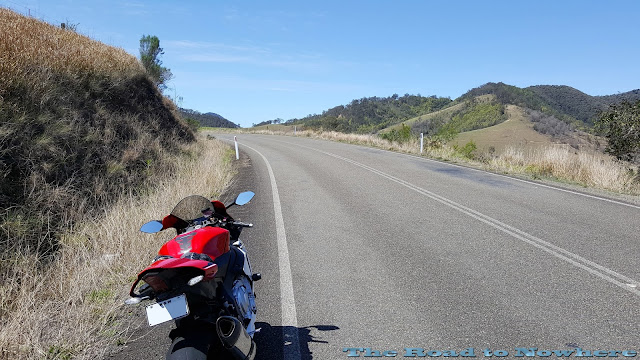 We stopped in at Gloucester for fuel for the bikes and ourselves. A large iced coffee hit the spot just right. I wasn't hungry after the huge breakfast I'd had. We headed back down the way we had come on day 1 through Dungog and Gresford. I had to wave Slomax through on one section as I had to slow down the road was that rough I was getting hammered by the road surface and hard suspension. I repeat it again, Dungog council get your fucking shit together before your crap roads kill someone.

Another slaps of fuel in Singleton it was the home run down the Putty Road back home. A quick stop at the top of the ten mile then we were under way again. The pace through here was good and I followed Dave and Slomax getting my knee down on Batman corner. When the road is in good condition this new R1 is superb but when its not it can be a nightmare. Such a big difference in surface conditions on this ride. 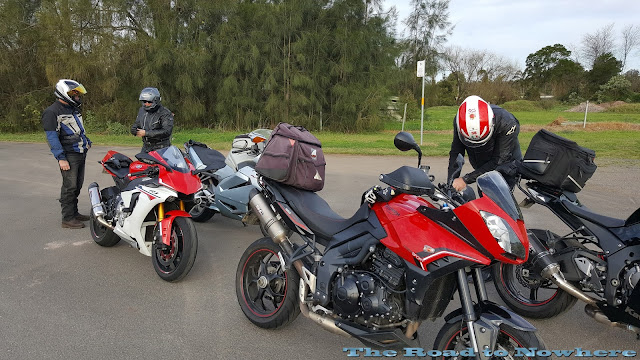 Stopping just outside of Windsor we said goodbye to Dave who was heading back down to Nowra, he had another 2 hour ride on top of what we had to do. Wonder how he felt at the end of that? I was shattered by the time I got home from the hammering I'd copped going through Dungog, it took me about two days to feel ok again after that ride.

Another top weekend of beer, bikes and bullshit...... er roads. Gents lets do this again soon!