I decided on heading out for a decent ride on new years day to kick the year off. I thought that this would be a great day as most people would be still in bed from a big night on the booze from new years eve celebrations, so hopefully there wouldn't be many people out and about. So the destination for today's solo ride was the Taralga hotel for lunch taking in as many twisty bits in between as possible. I decided to take my camel back today as it was going to be in the 30's. I'm glad I did. It's also double demerits here in NSW so I'll have to be careful.

First up was riding up through the Blue mountains via the bell's line of road. I've always liked the area around Bilpin where the tree's are evergreen, with apple orchards all along the road side. You can even come up here and pick your own apples. There are plenty of fruit shops along here too selling apples, apple pie and anything with apple in it. 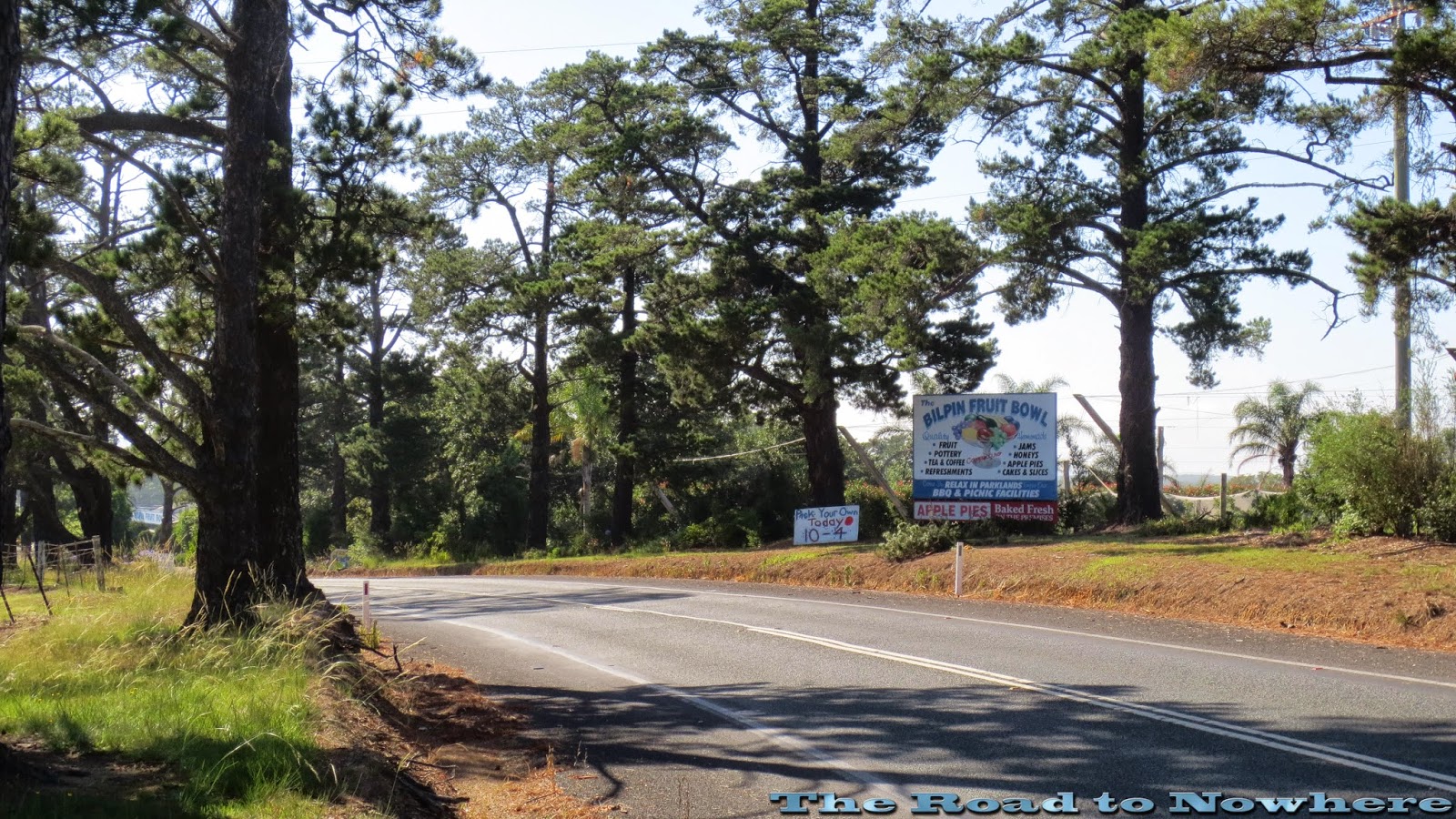 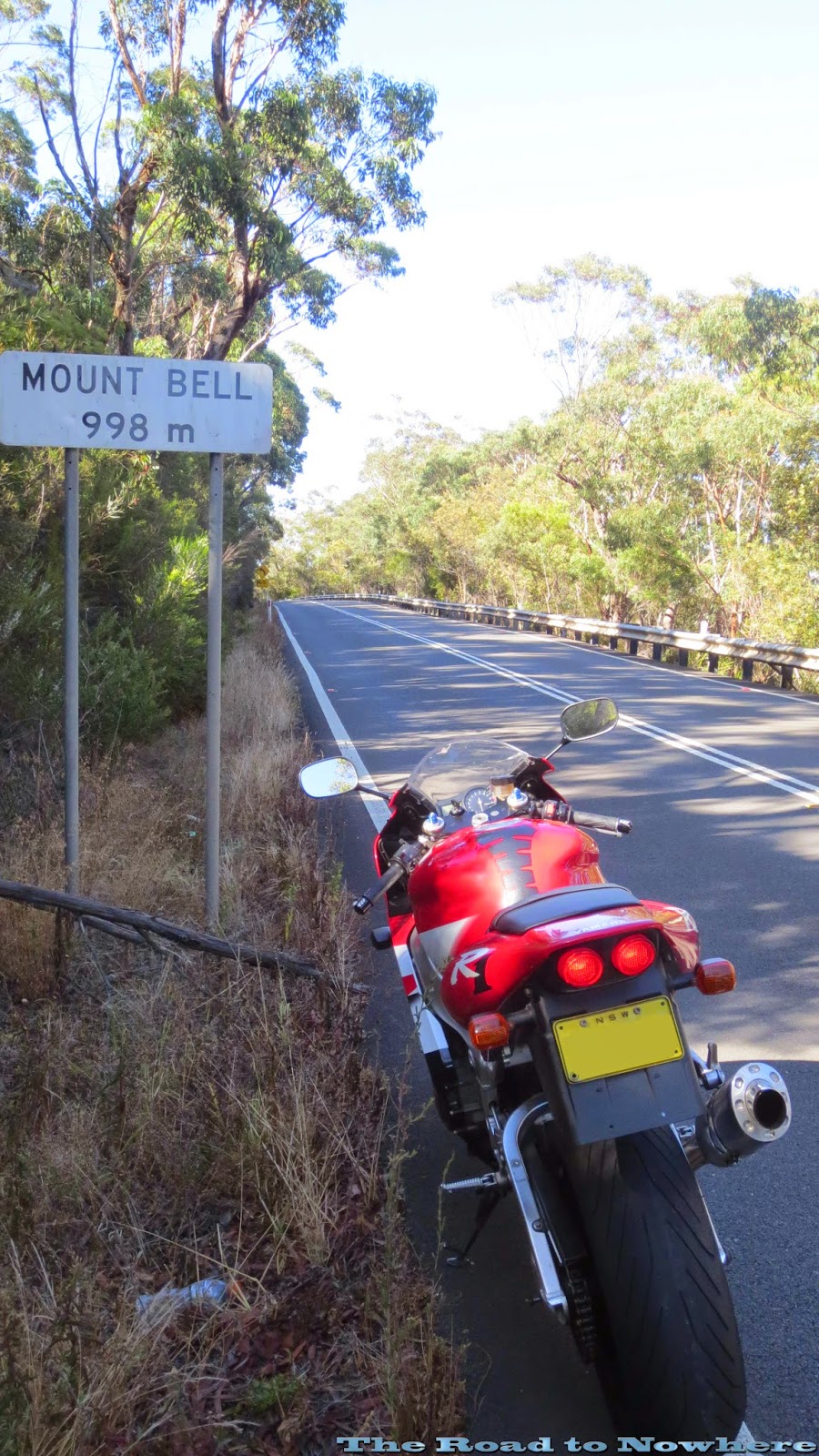 Leaving Bilpin behind I headed up into the Mt Tomah and Mt Bell sections of road where it becomes a bit more twisty and fun. It's funny how you build up a perception of how fast you think you can go on the road, then do a track day and suddenly find some new found speed. These sections whizzed by very quickly with little effort.

I took a small detour down one of the dirt tracks to a lookout for Mt Banks. I didn't go all the way down but I still had some spectacular views of the canyon walls with Mt Banks on the left of that.

I couldn't hang around for too long to look at the views as there was still a lot of riding to do to get to my lunch destination. I continued along until Bell where I turned off and crossed to Mt Victoria and headed down Victoria Pass. It was an excellent choice as there was hardly anyone around this morning, my hunch was right everyone had a big night and the roads were empty including highway patrol cars. 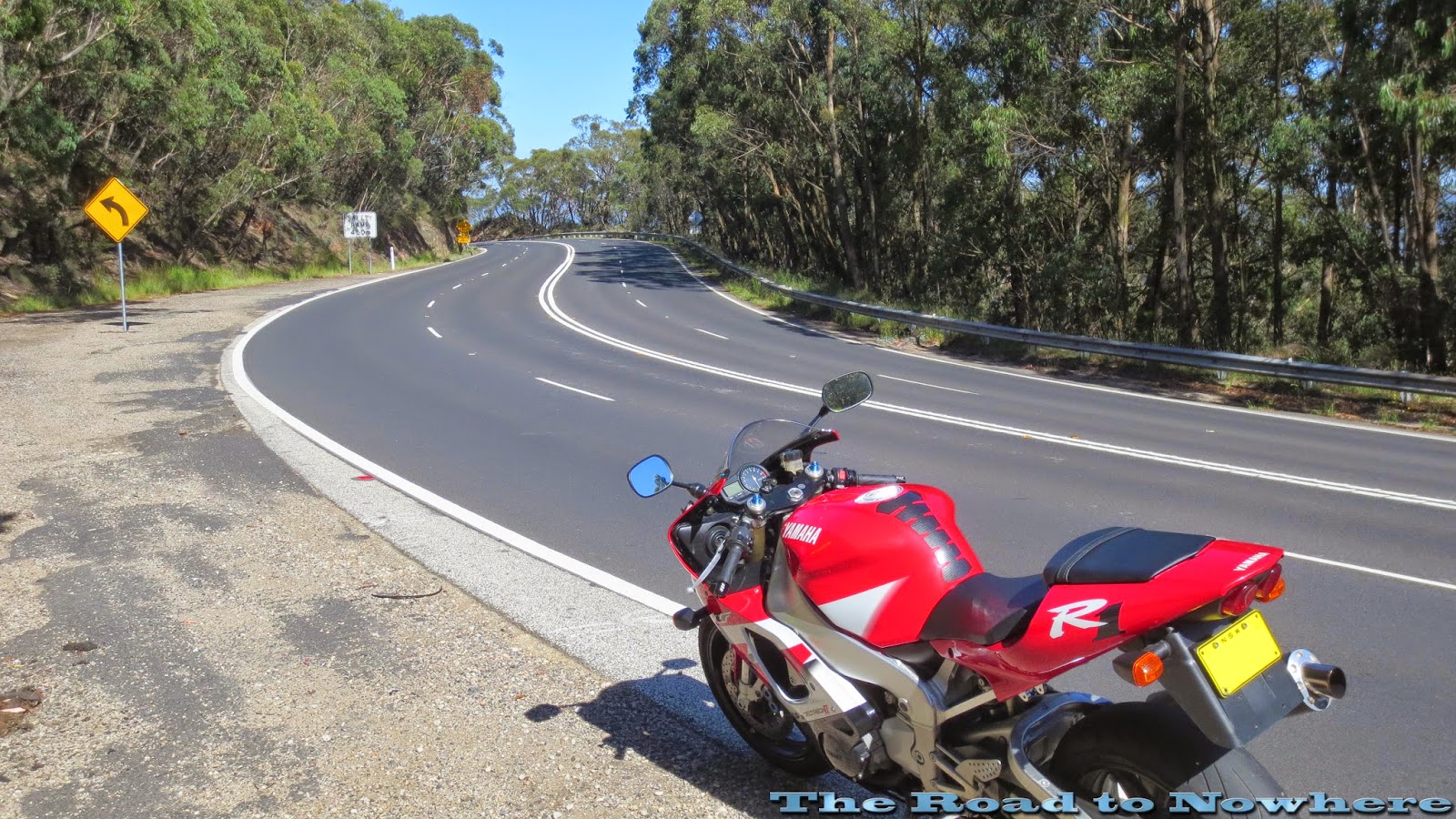 The monument below was put there in 1832 when this section of road was built. The stone bridge was built by convict labour to cross the last point between the 2 ridges as the only way down from the mountains on the western escarpment and it was completed in 1832. It's pretty much unchanged today. There's a lot of stone work in that bridge. I wish they would upgrade the bridge to 2 lanes each way like the rest of the road here. 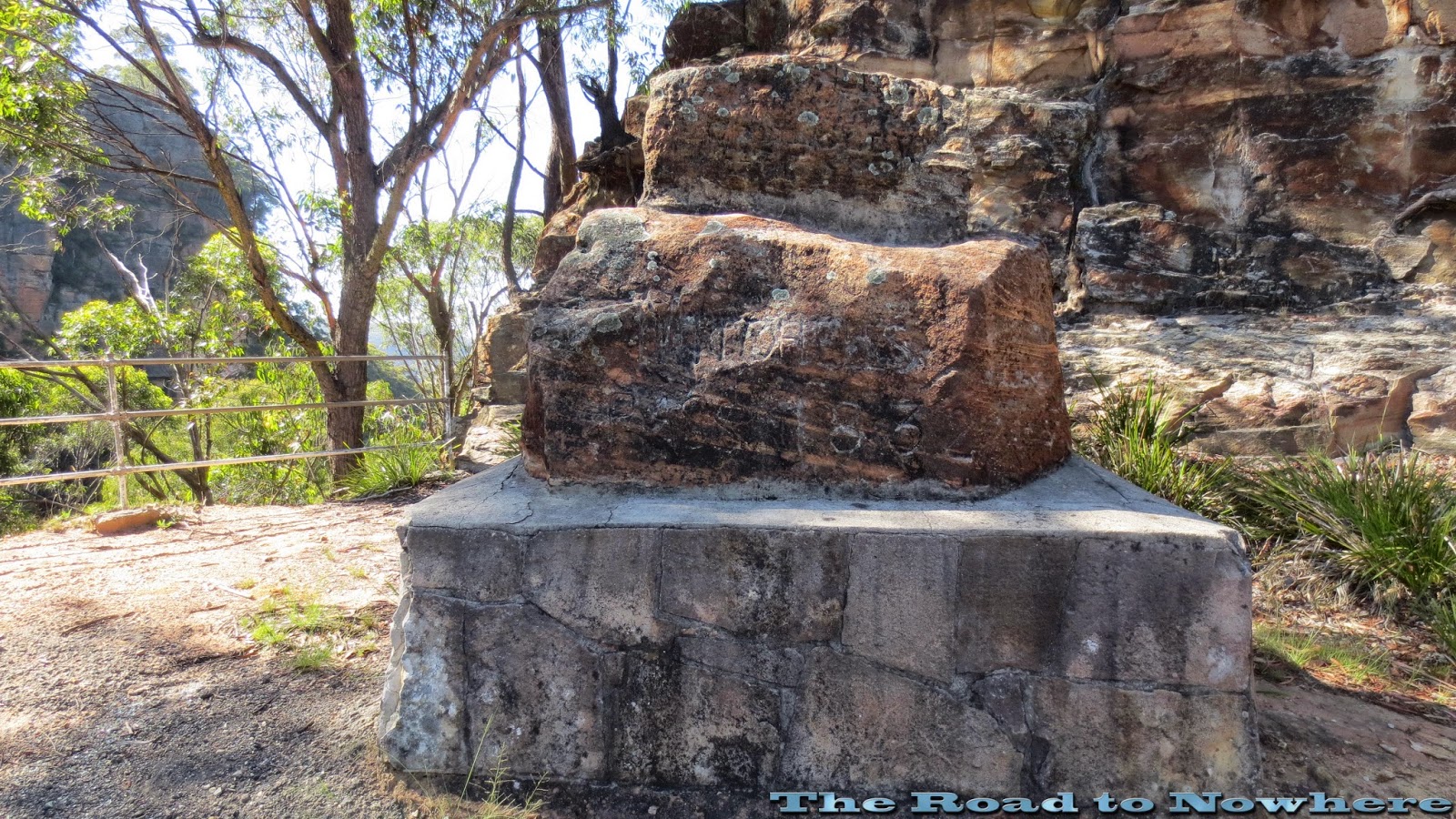 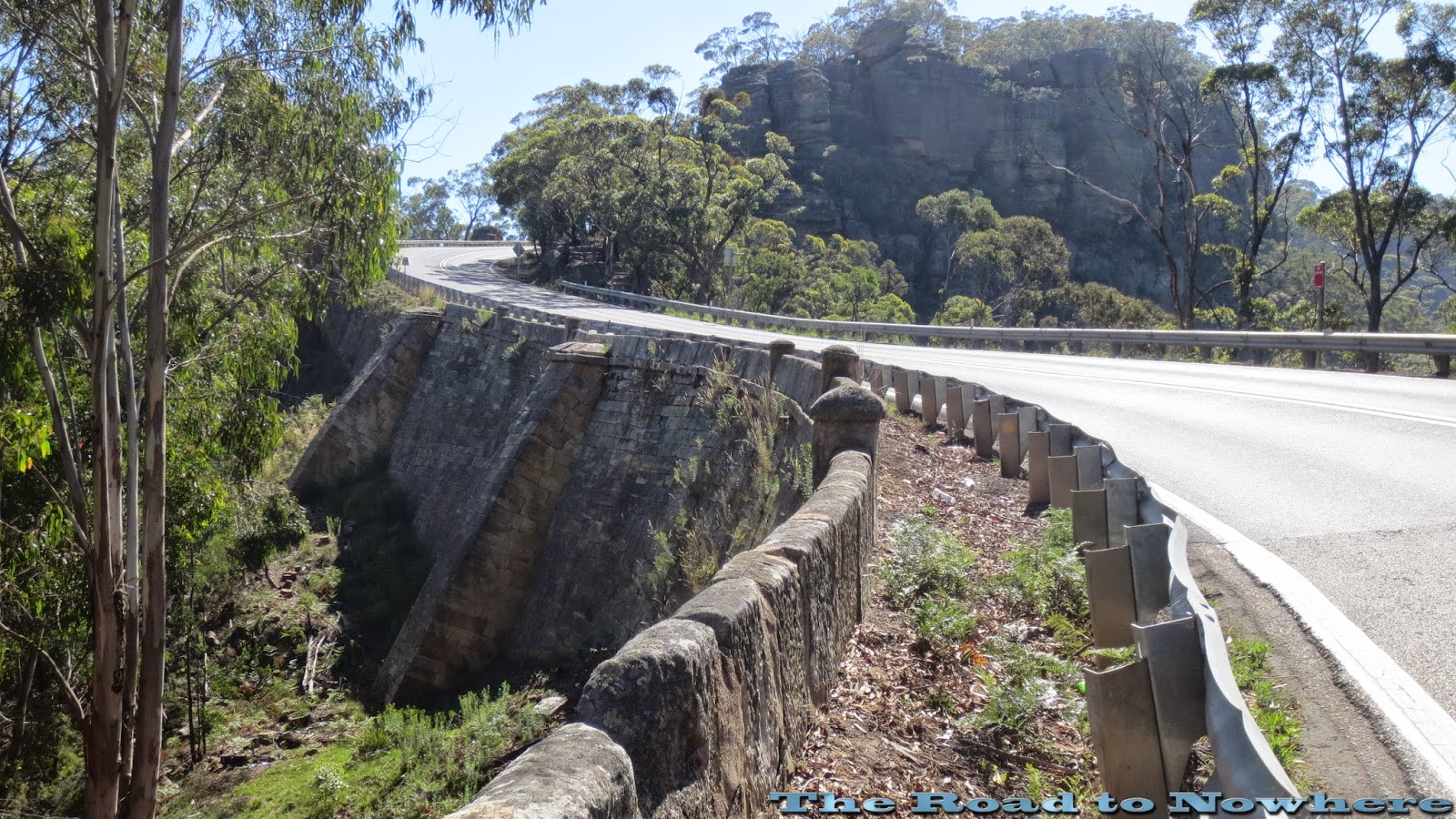 I soon turned off the great western highway and headed out towards Jenolan Caves. And started the long climb back up the ranges for the sudden drop down into the gorge where the caves are. No pics of the caves today as I've taken pics of them before you can find them here. 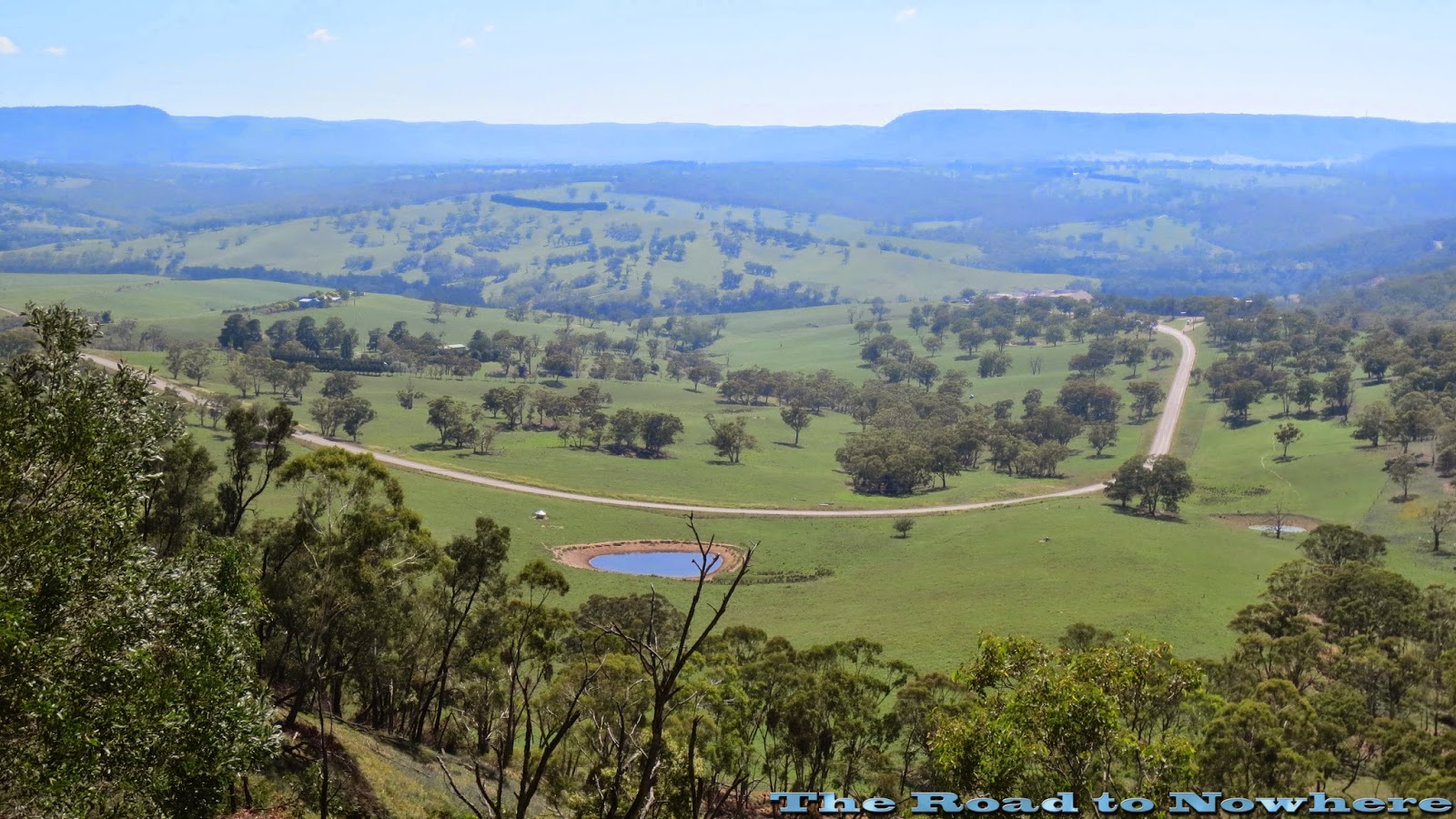 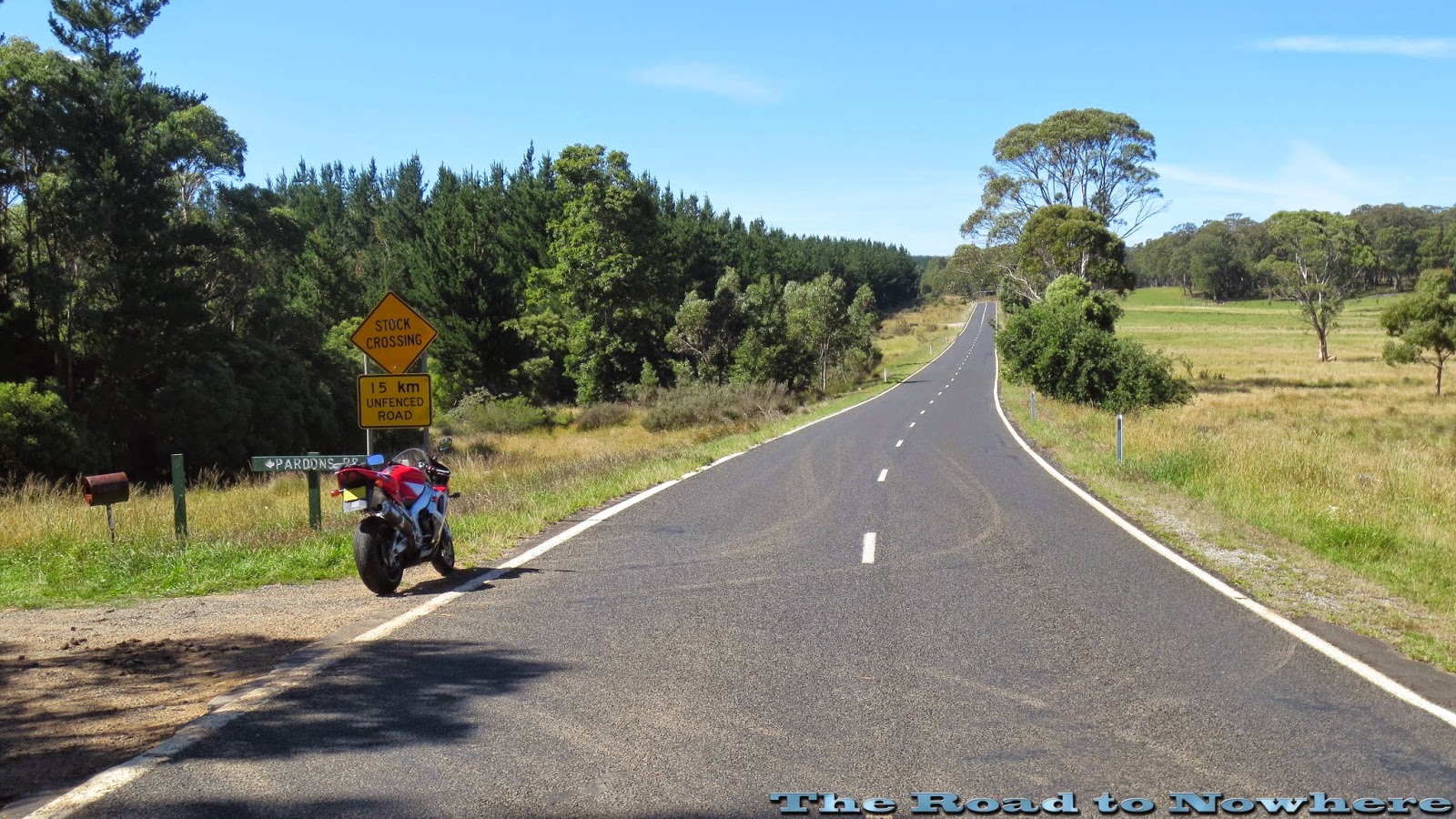 I arrived in Oberon for a quick fuel stop. Every time we've stopped here for fuel its been 20-30c dearer than anywhere else. Today I found out the BP in town was 6.5c per litre cheaper than the shell so if your riding  through try the BP(soon to be caltex) first.

Rather than ride out through the boring bit to black springs I'd back tracked out the Jenolan Caves road to shooters hill road which takes you down onto the abercrombie road and Taralga. I love this bit of road its very scenic and also high speed(but also very good at cruising speed). The road is basically here for the logging trucks and is very wide and very smooth much unlike other roads around here. There was a couple of kangaroo's that had been hit and were laying on the road just over a crest which became a bit tricky to negotiate at speed. 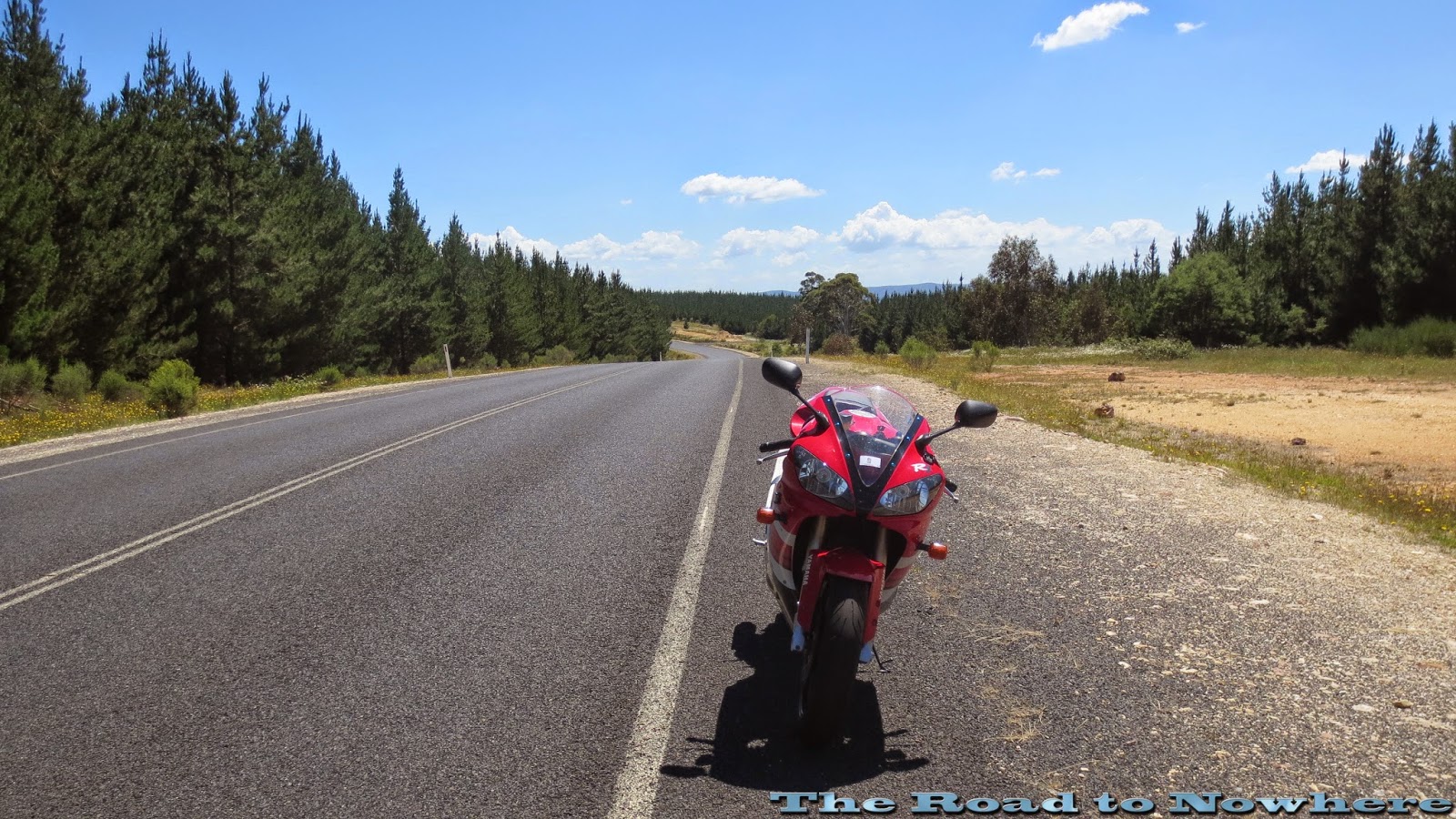 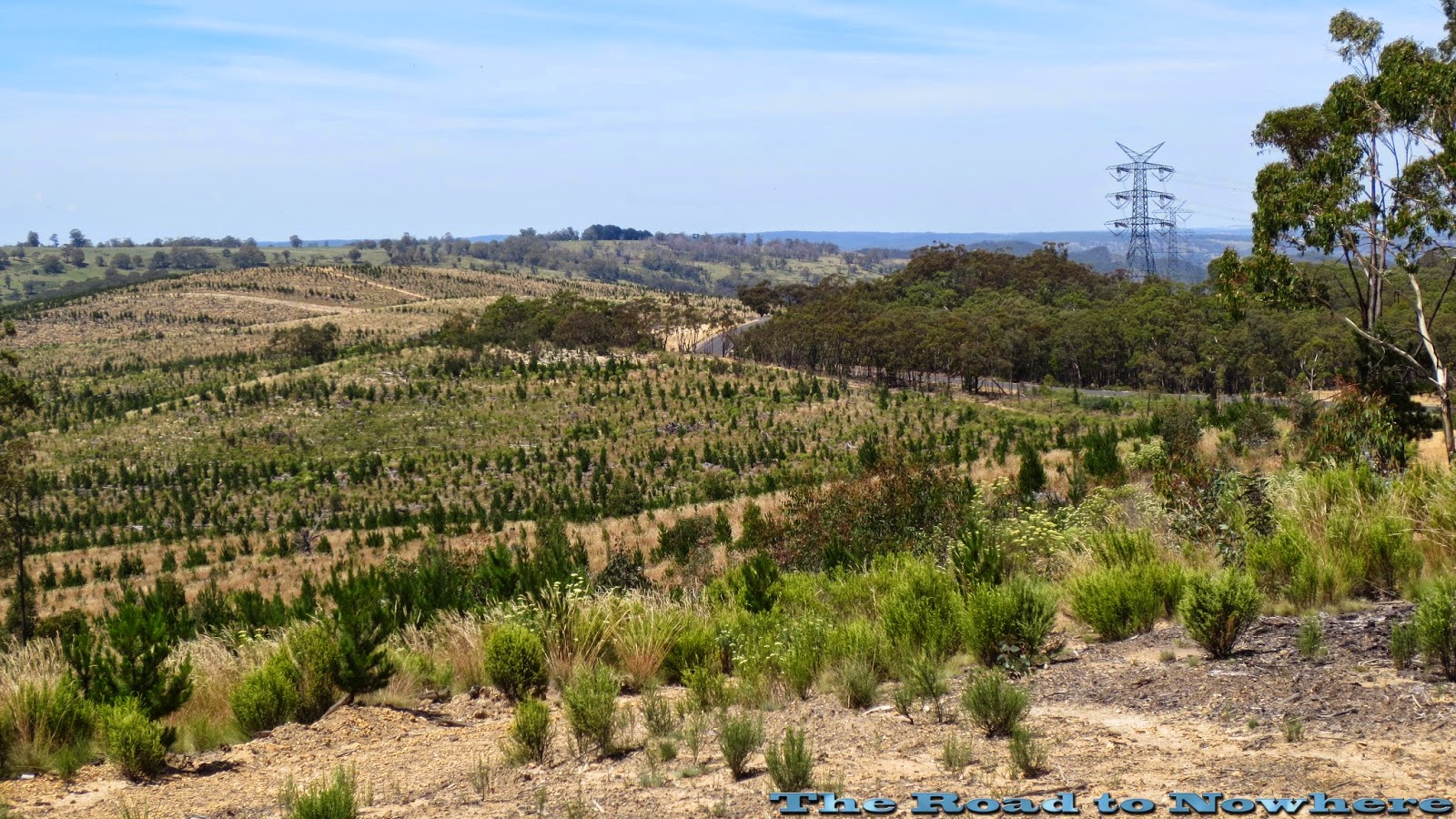 As I was doing a solo run today there wasn't anyone to take photo's of standing next to their bikes so I had to get in some of the shots. Here's my first selfie. 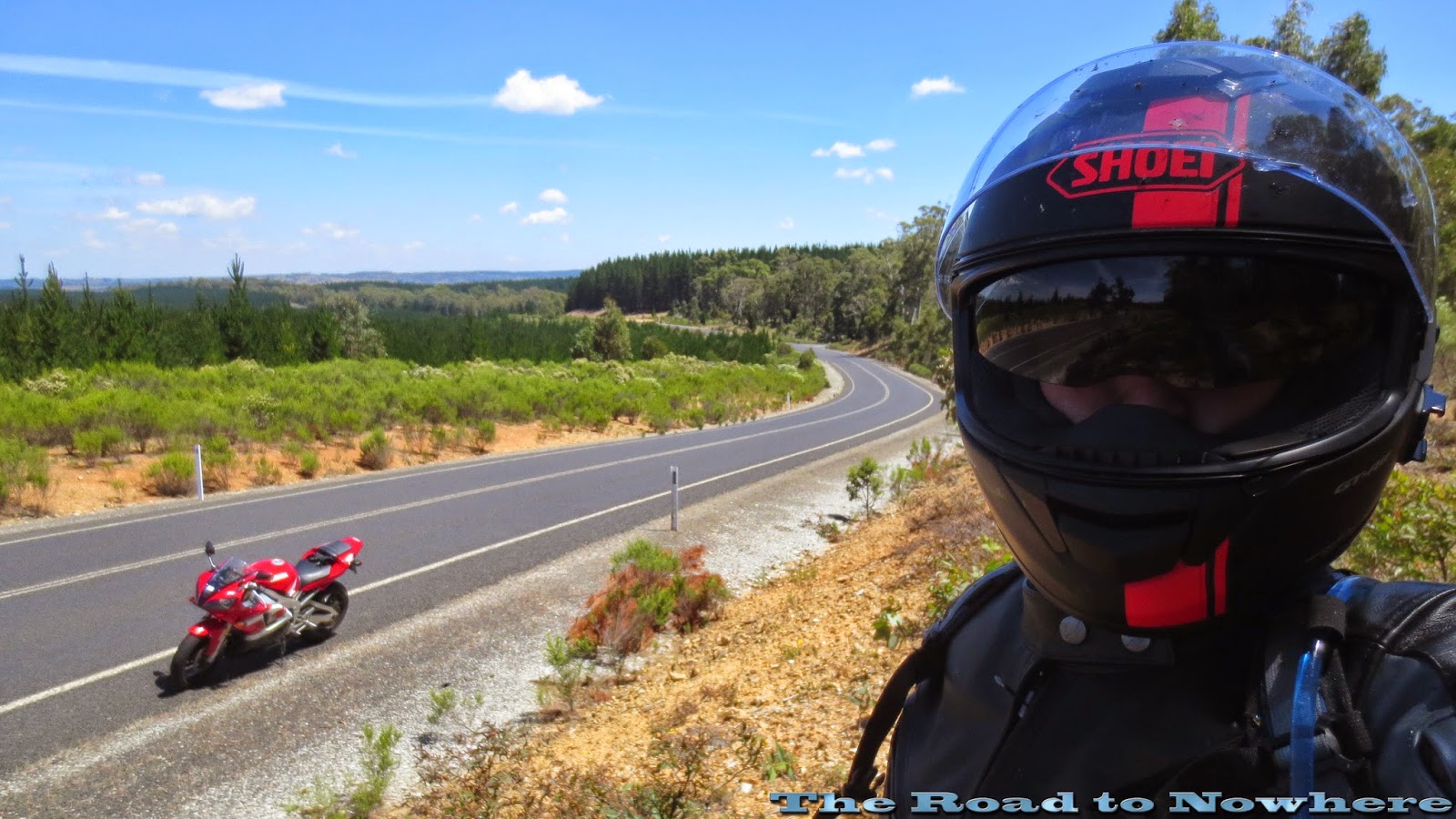 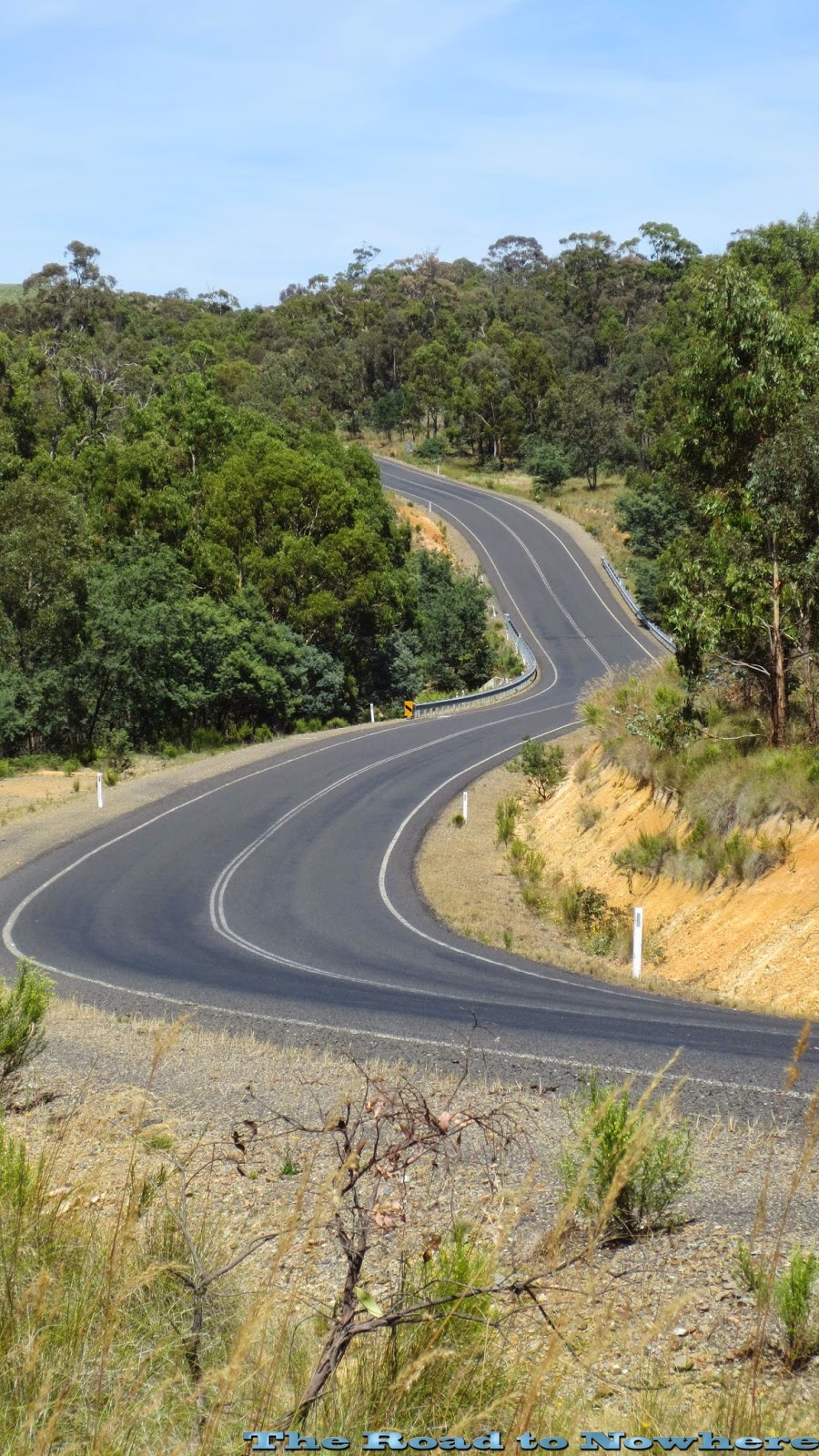 As I got closer to Tarlaga I put the gopro on going down into the gorge. Not much to look at when I watched it back so it didn't make it onto the blog today. A bit furthur down the road I noticed that there was about 20 odd wind generators on the hills just out of Tarlaga. I don't remember seeing them before. Might have to take a closer look. 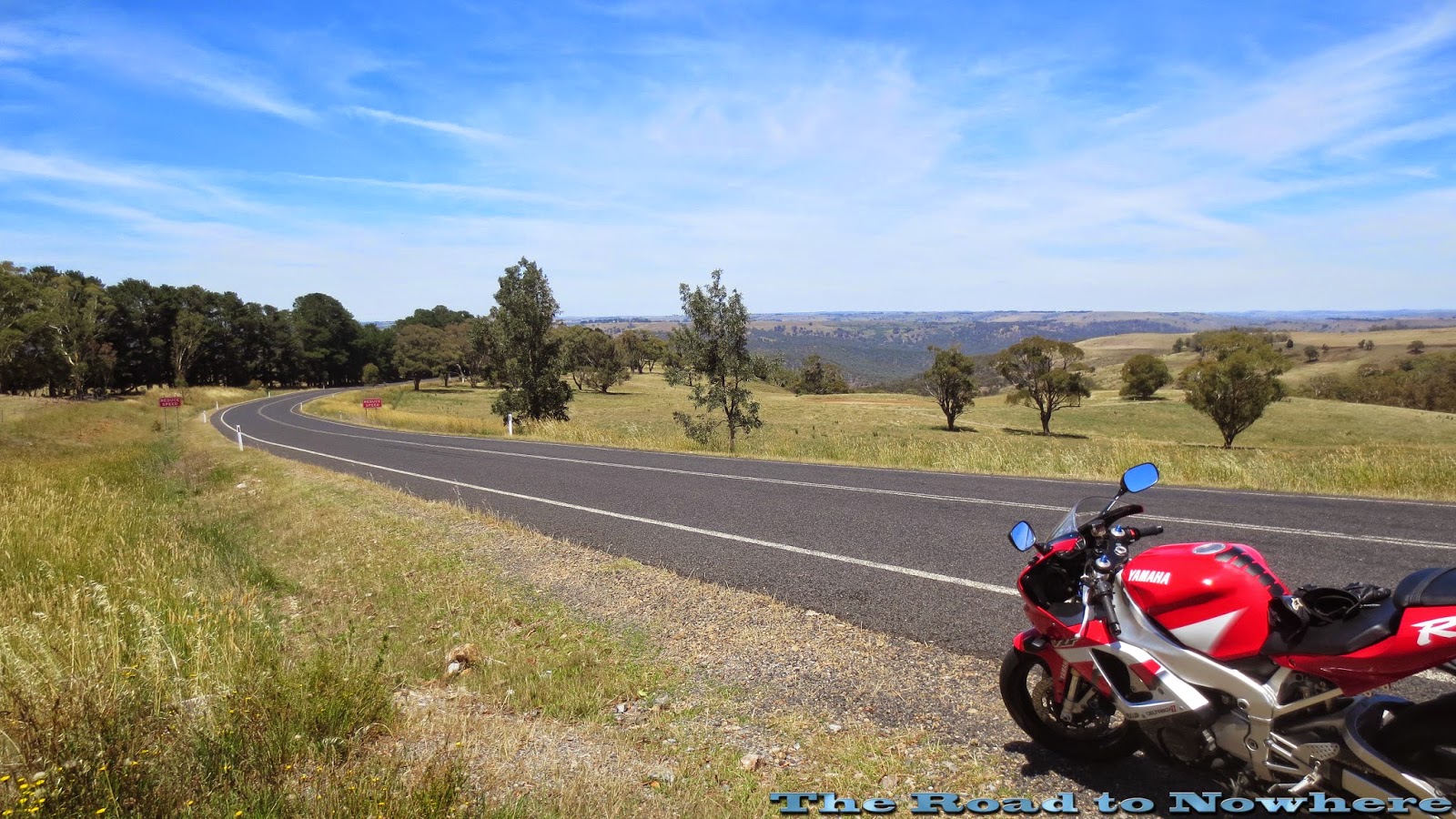 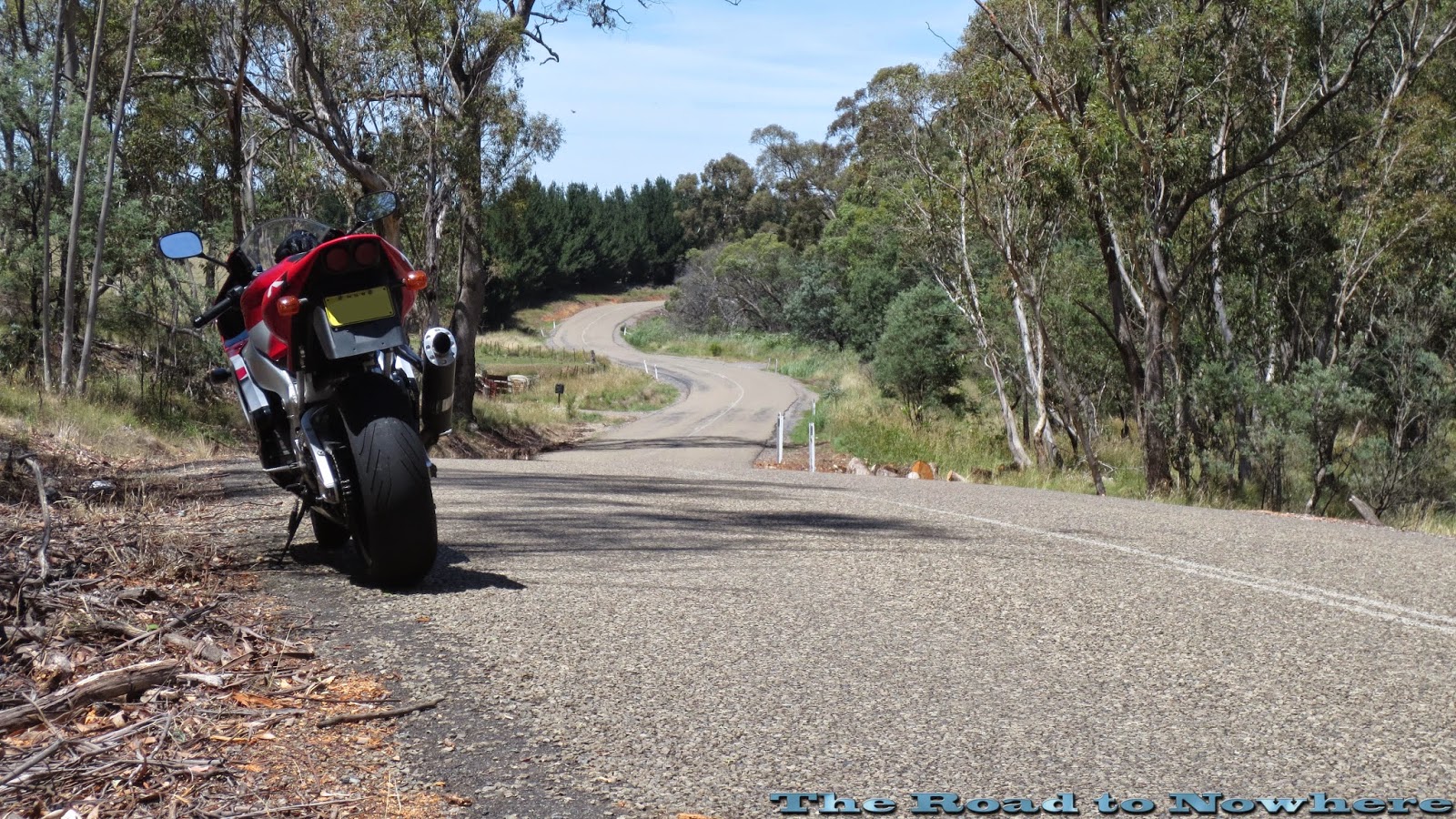 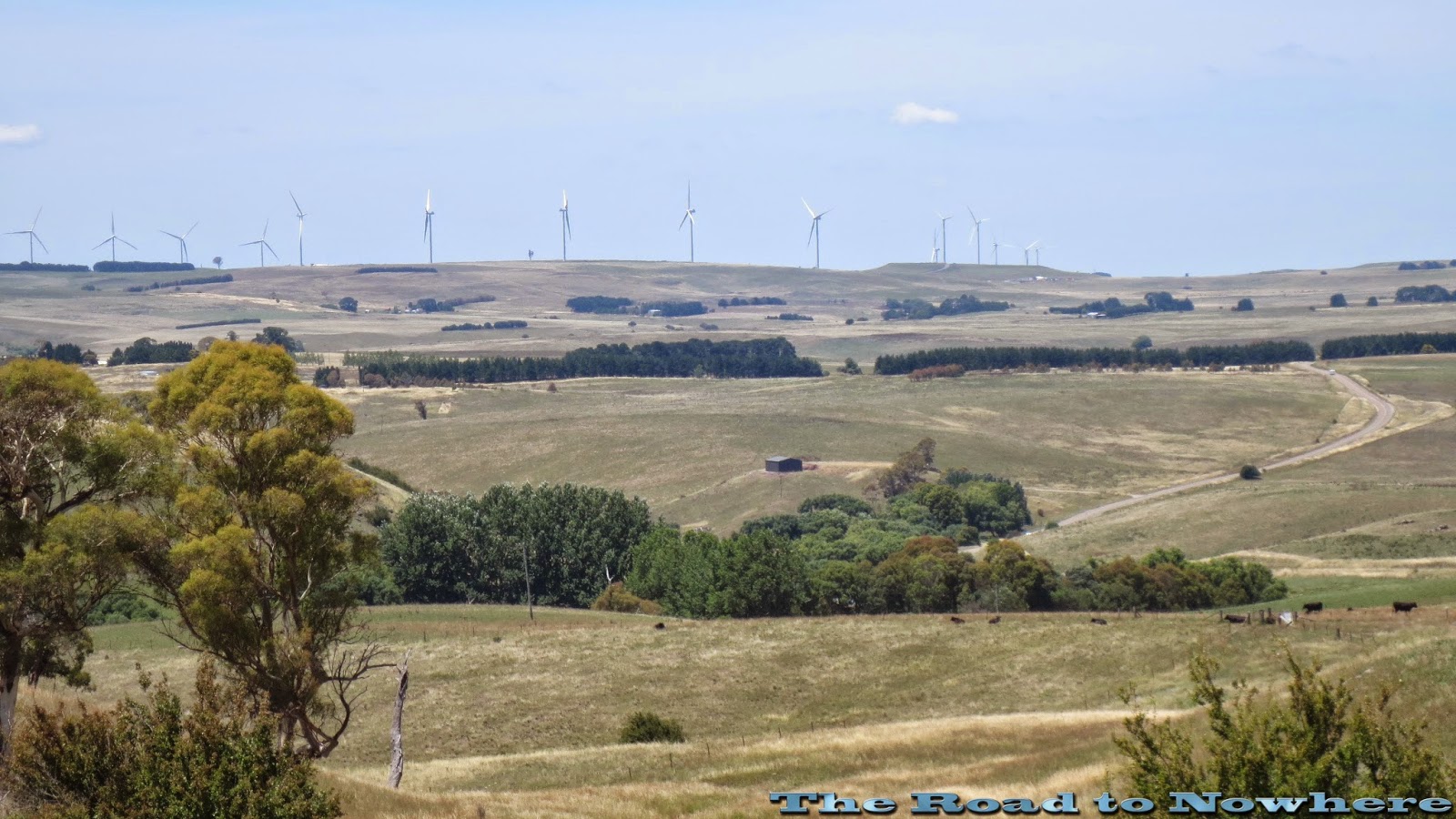 I got into town just before 12pm right on time for lunch. I was pretty hungry by now. There was only 2 people in the pub today, still it was early. I hope they are doing lunch today as I didn't ring ahead and it is a small country town. As luck would have it they were doing lunches. I ordered a steak sandwich and an ice cold beer to wash it down with. I can recommend the steak sandwiches here. It was fantastic. About 20 minutes later the pub had a good crowd in. 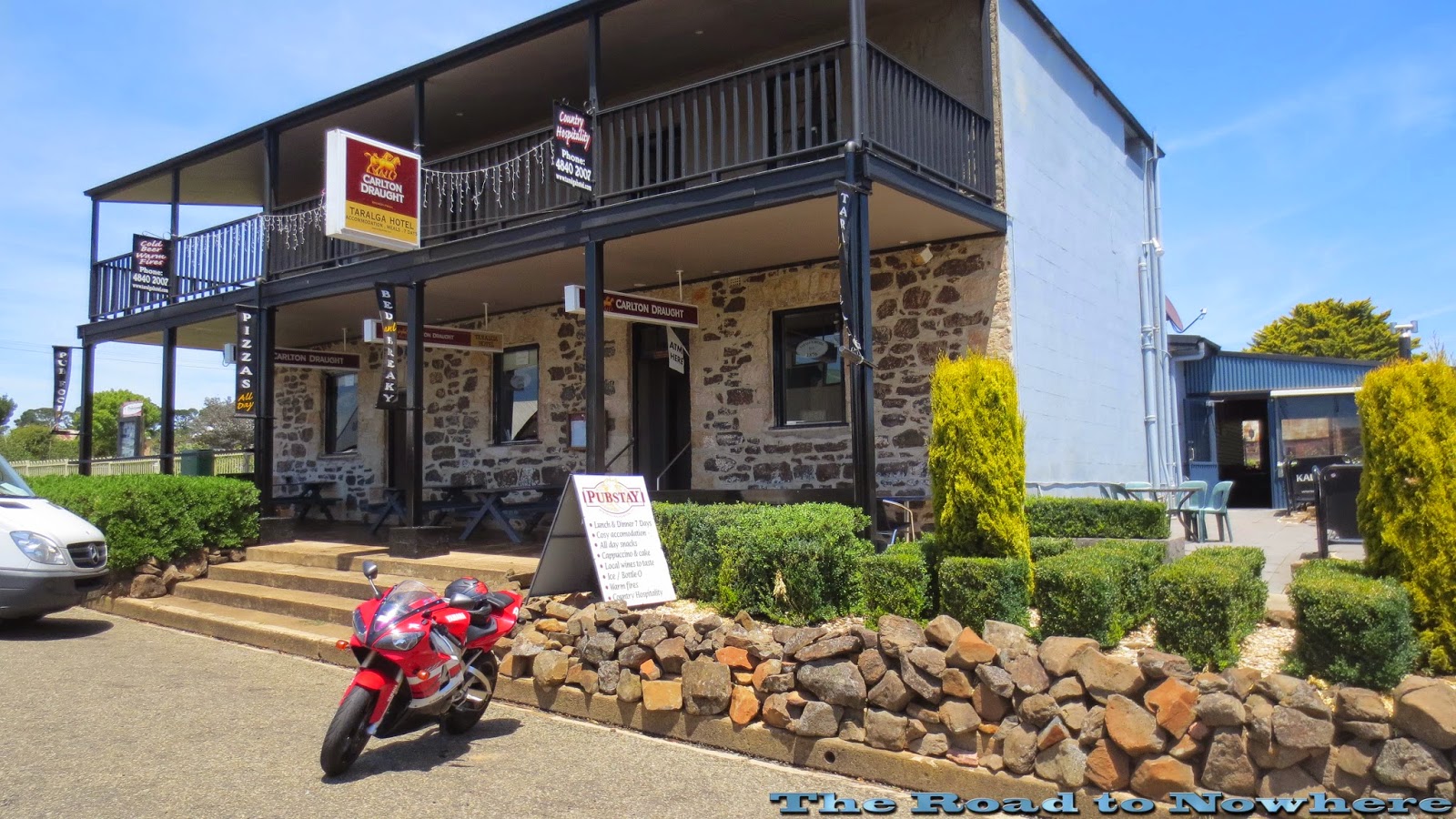 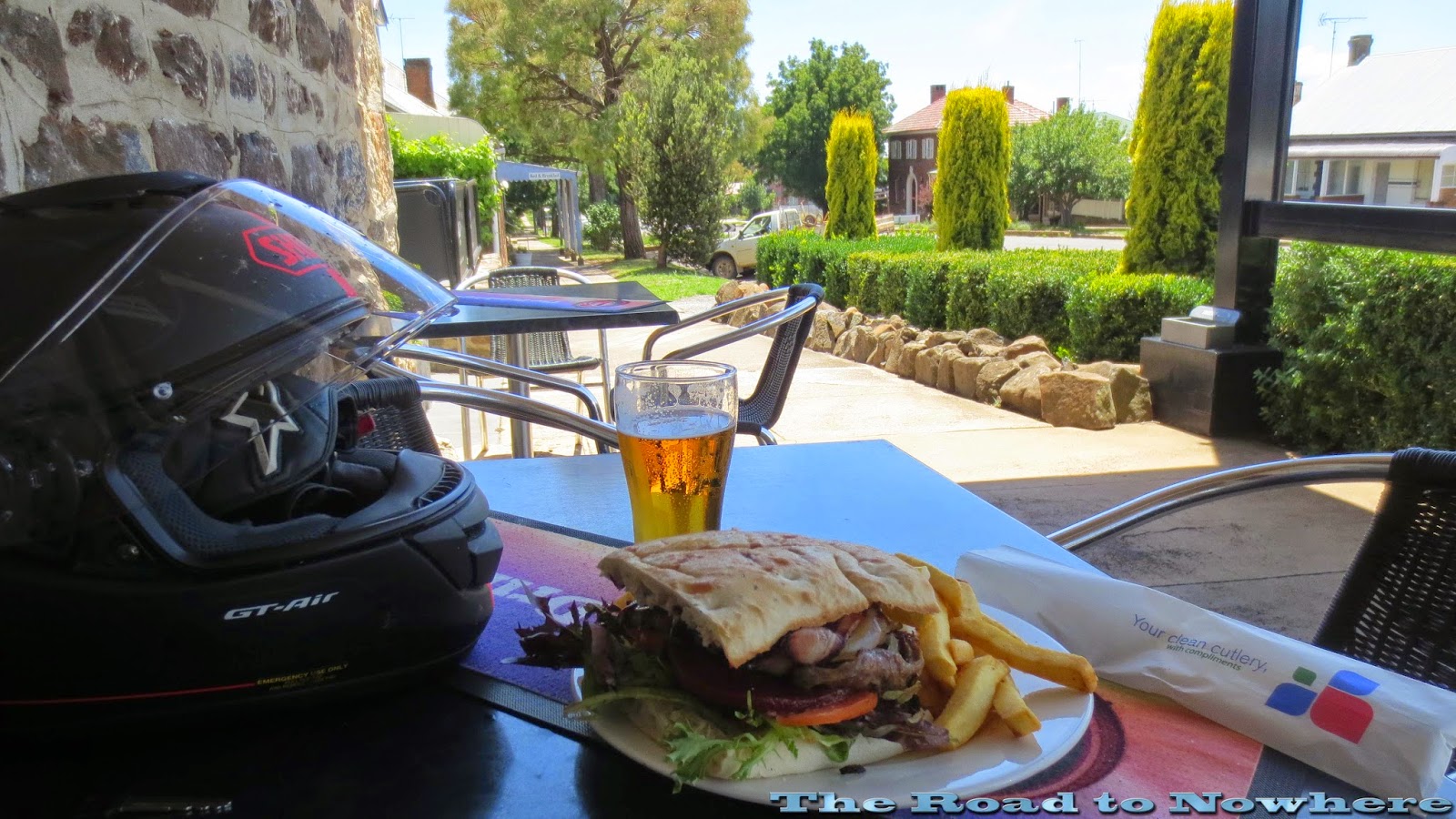 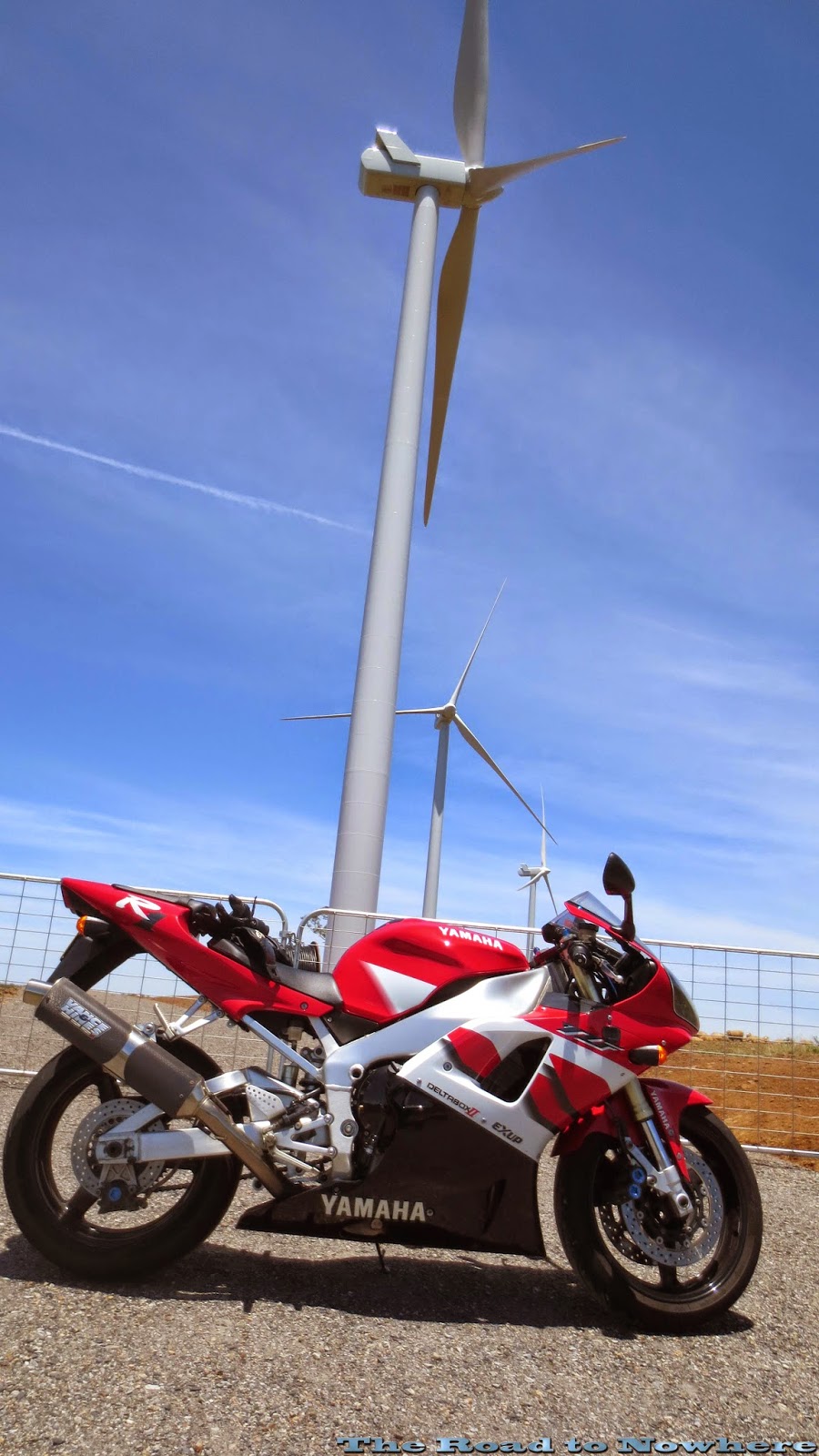 It was 1pm and time to get going again, I took a quick detour out to the wind farm to have a look at it. These definitely were not here last time I came out here. I saw a notice on the wall of the pub which said something about 50 odd wind generators would be installed as part of the project.

Just one of the blades on these things is the size of a semi trailer that's how big these things are. They are huge.

It was starting to get hot standing out here in the blazing sun in full leathers so it was time to keep moving. I was basically retracing my steps back to Oberon for fuel then home. 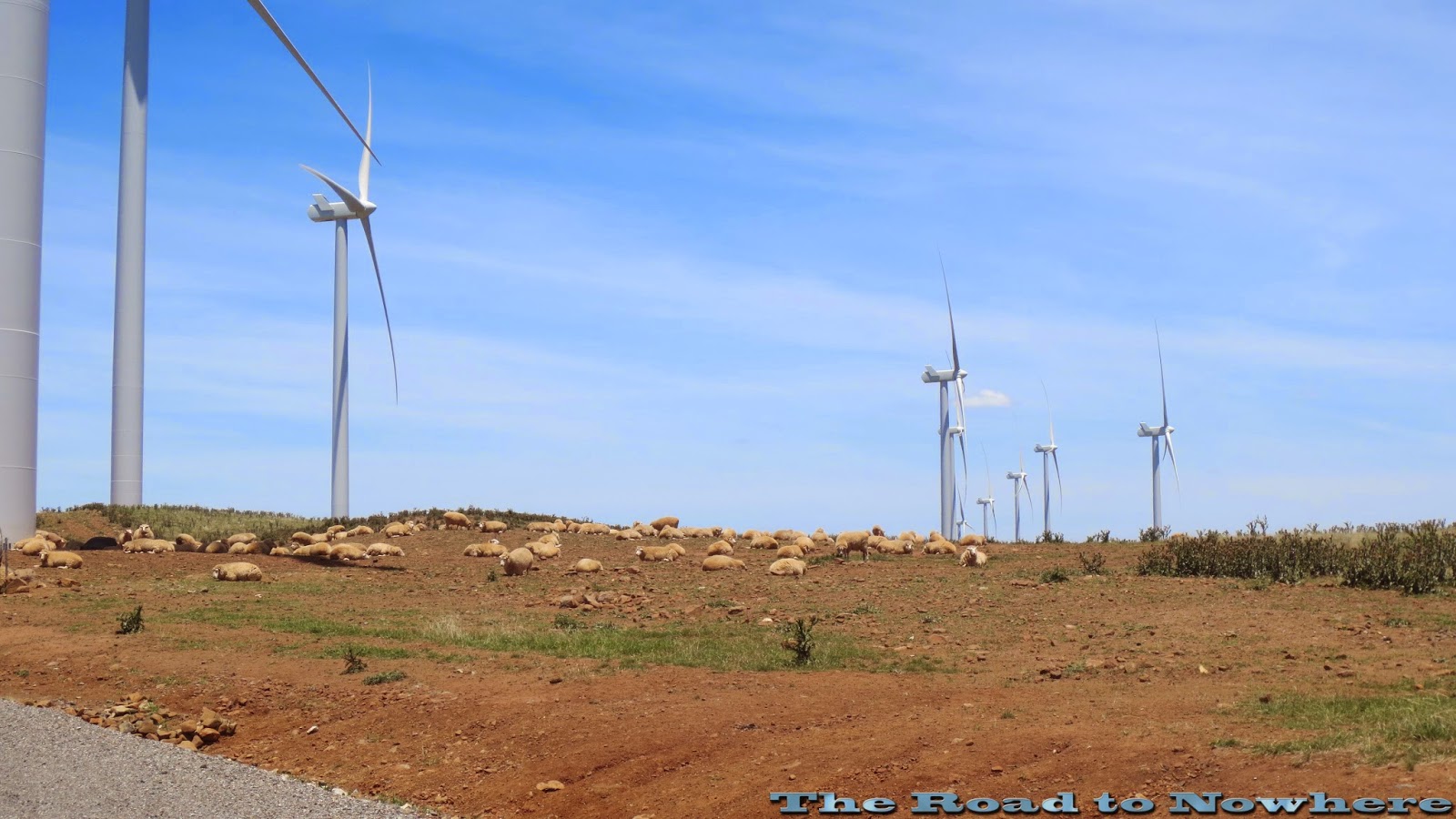 On the way back I stopped along Shooters Hill road at a turn off on the road. I was wondering what was down the road, it looked inviting so it was time for another quick detour. It turns out this road was just as good as shooters hill road with big wide smooth tarmac with forested verges all the way along with the road being like a roller coaster ride. This is R1 territory. 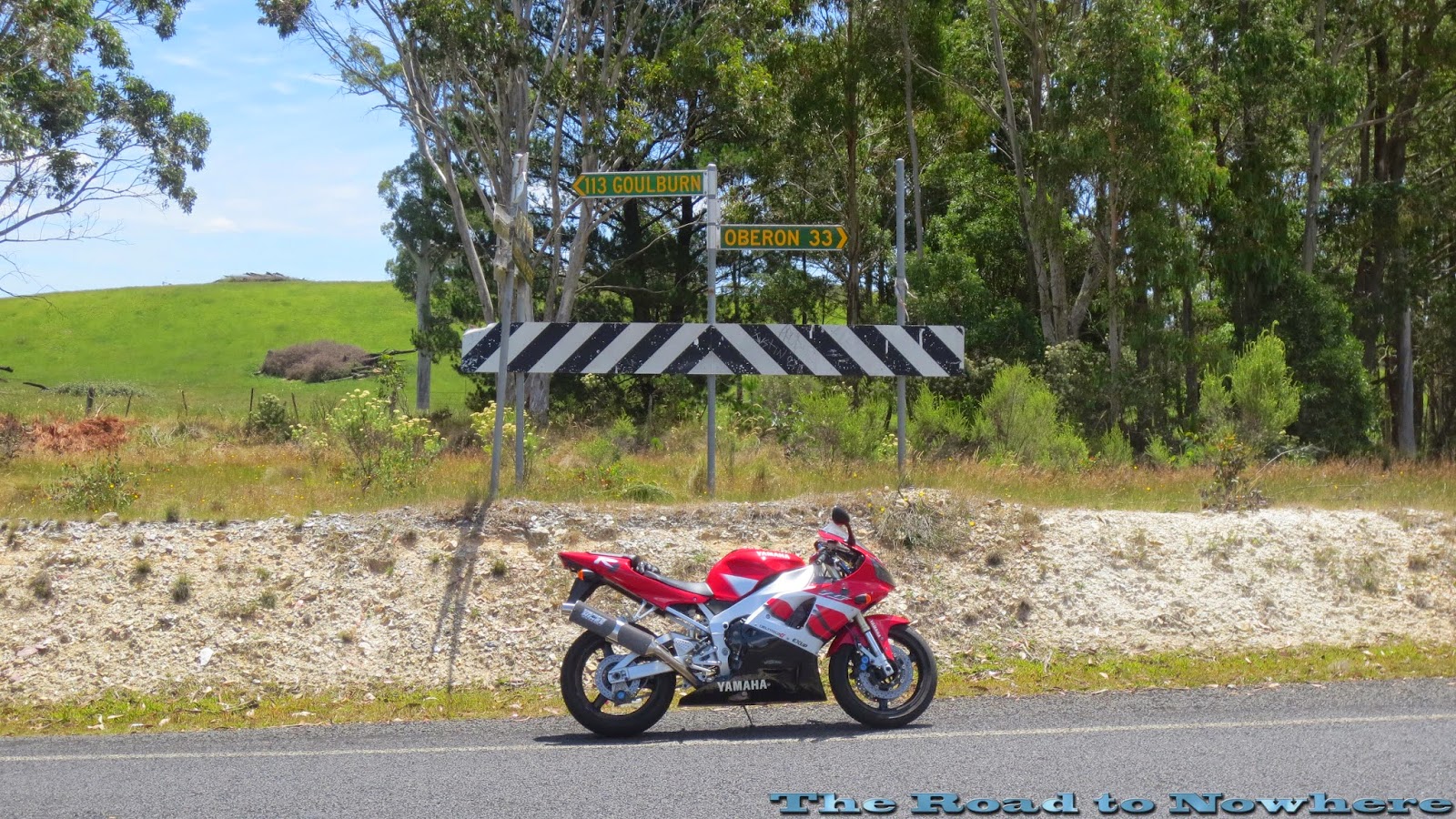 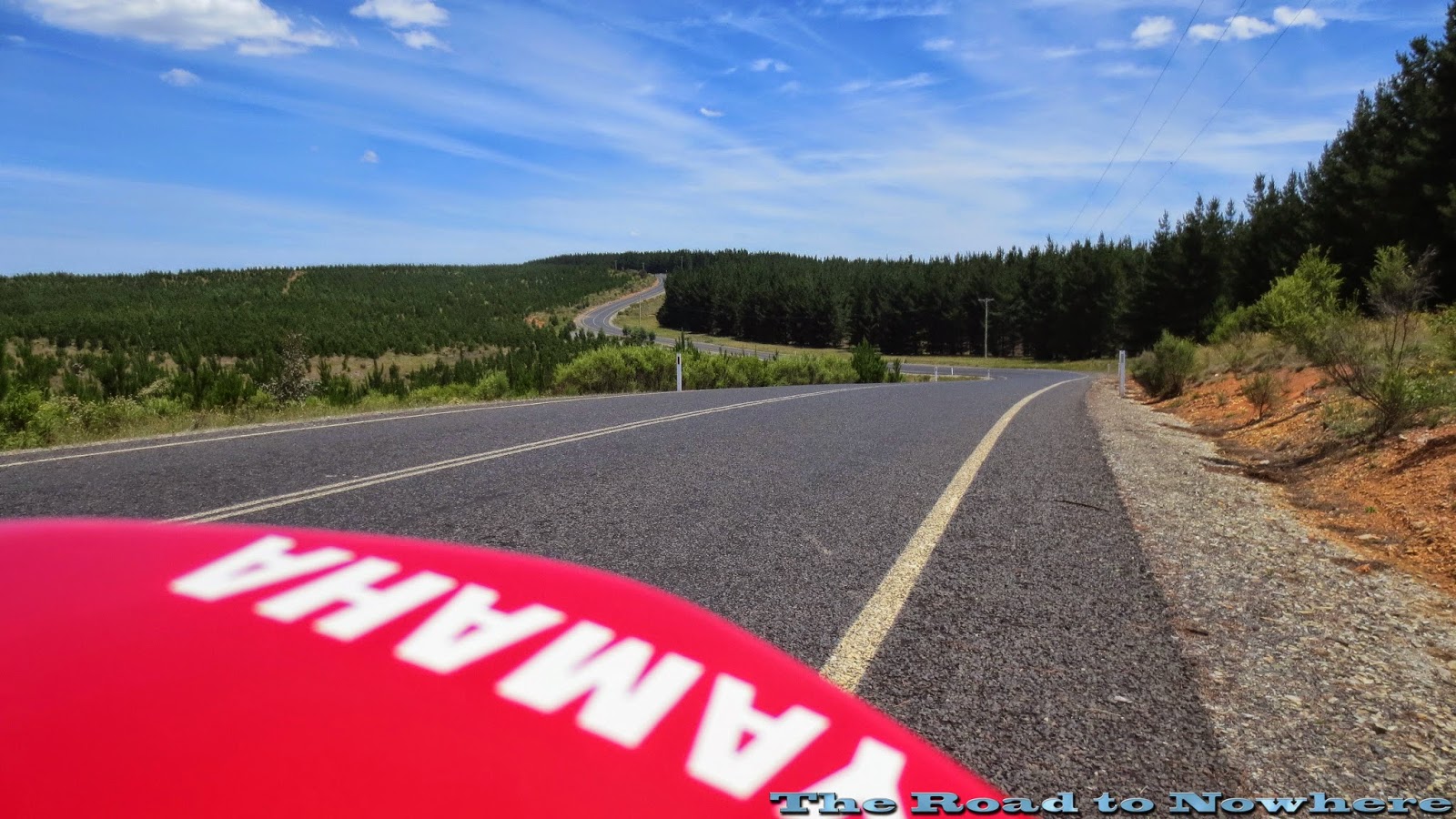 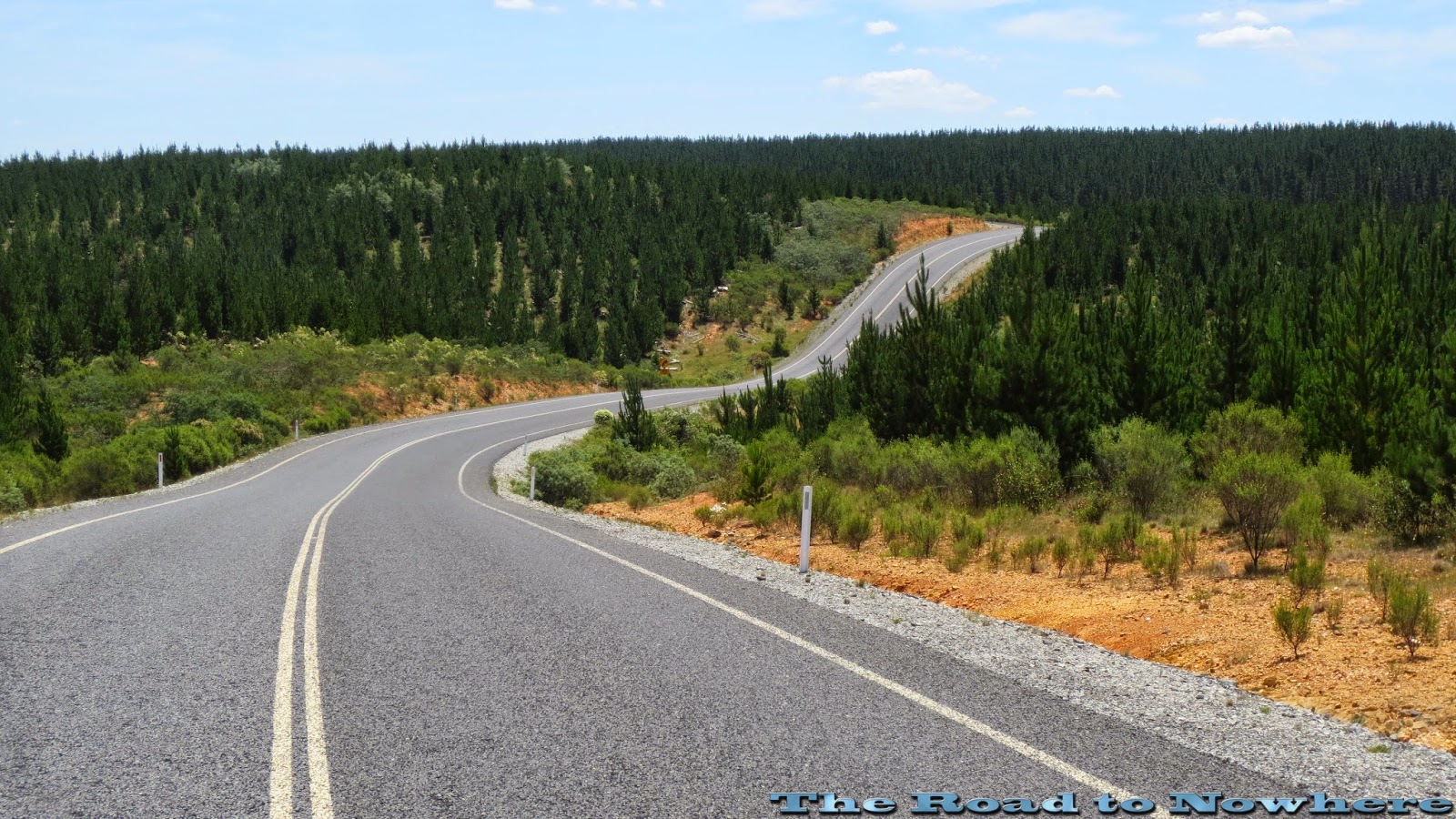 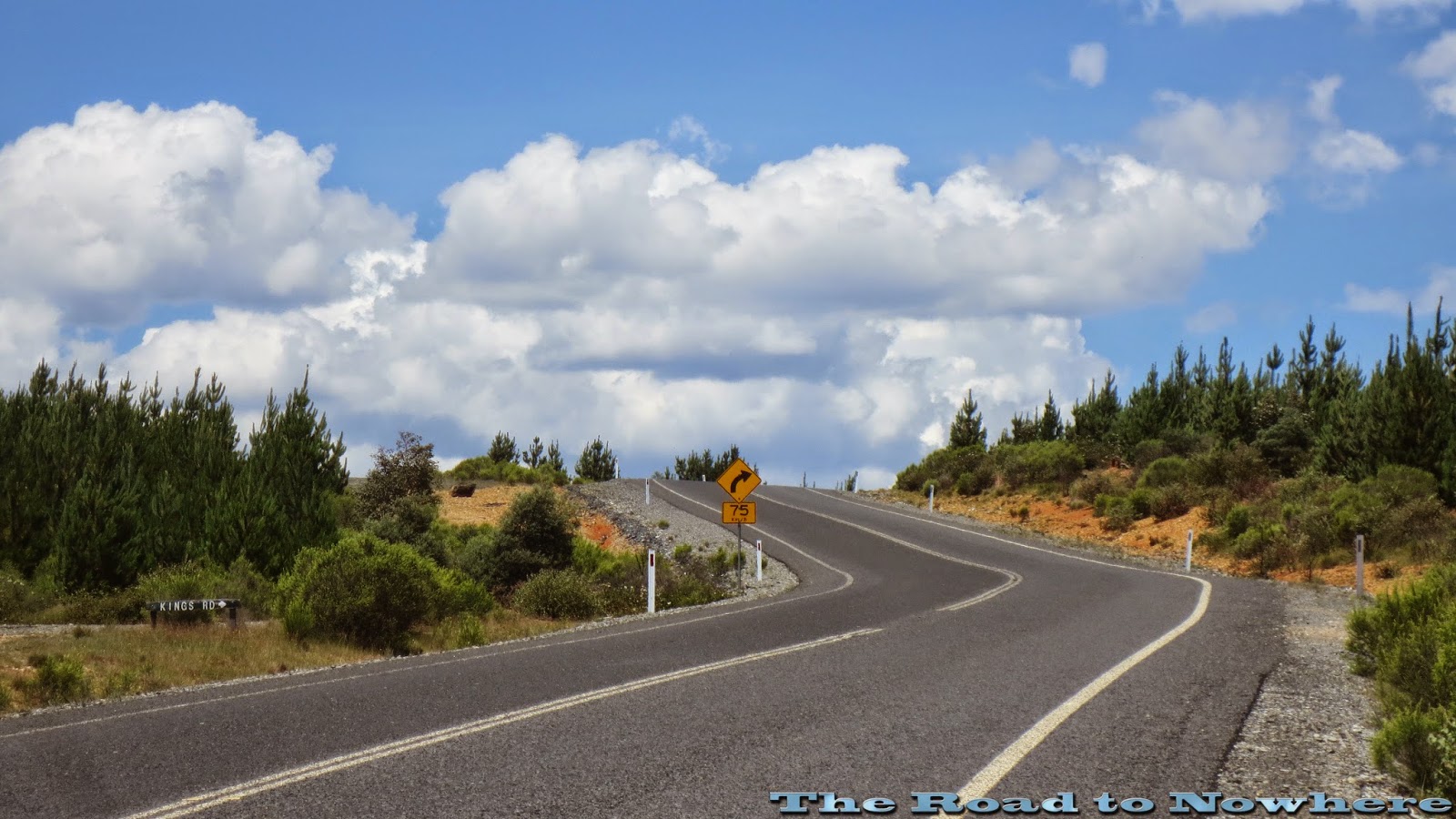 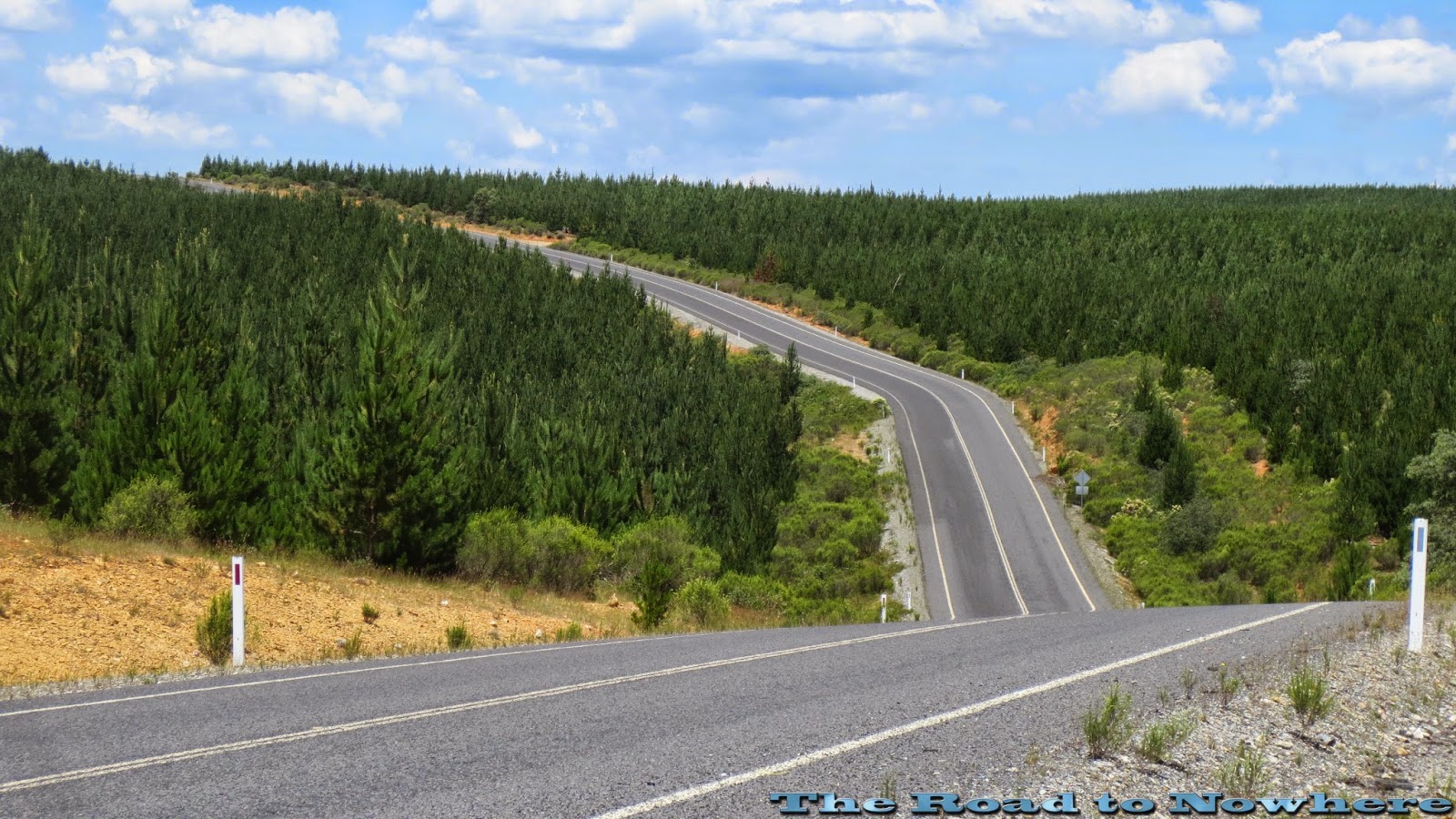 It turns out that the road comes to an end, well an end of the tar that is, but it continues on further. The road was only about 10km or less but oh what a road. So that was it for me I turned around and had to ride those sweet sweet roads again. Can you tell how upset I was about that?

By the time I left Oberon with a refilled camelback I went straight back down Duckmaloi rd and up Victoria pass and back along the bells line. It was hot, bloody hot. It was making me tired faster, so I slow it down to the limit across the bells line. I saw my first highway patrol and it was about 4pm. Not bad for today. It was 35°C when I got back into Richmond. I was knackered in the heat after a full days ride. The camelback was a life saver in the afternoon heat. You couldn't wipe the smile off my face for hours after. What a fantastic day and a great way to see in the new year.